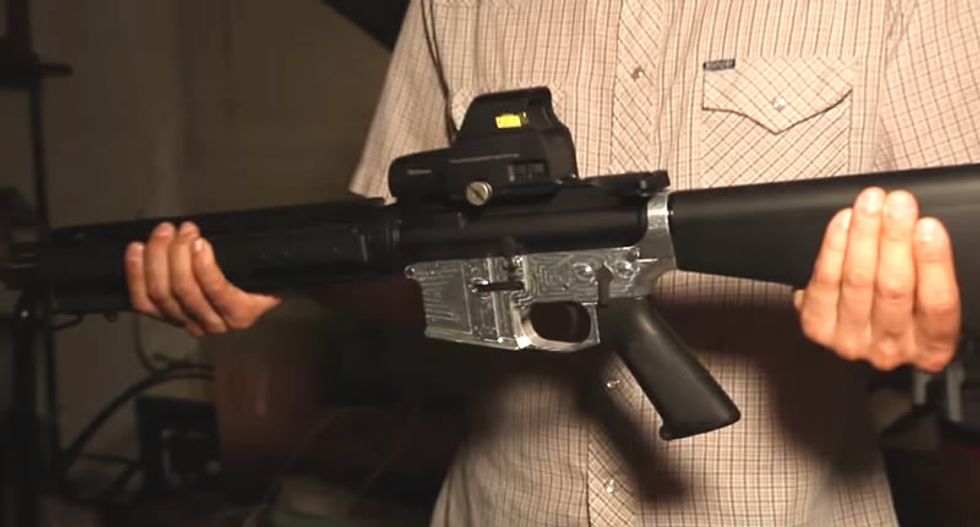 A gun rights advocate has invented a 3-D printer that will allow amateur gunsmiths to create AR-15 assault rifles without serial numbers or the hassle of a background check, WIRED reports.

Earlier this year, Cody Wilson demonstrated that anyone could use a 3-D printer to print a gun.

"If 3-D printing means anything, if the digital revolution and 3-D printing revolution have any interesting terminus, it’s because we will all have access to greater means of production — just like these cameras and computers that we have enable us to become cultural producers outside of the monopoly schemes of the legacy players, so too with material things, and that must, of course, include guns," Wilson told We Are Change.

"To not think that it included guns, to be surprised by that, means that you’re just kind of drinking the Kool-Aid," he added.

According to Wired, his new project in DIY gunsmithing is even more ambitious -- now, he is using a PC-connected milling machine, dubbed "the Ghost Gunner," to print the component of an AR-15 rifle called the "lower receiver."

The lower receiver is the most heavily regulated component of the AR-15, as it is the body of the gun that connects all of the assault rifle's other parts. For $1,200, Wilson's company, Defense Distributed, will sell anyone a computer-numerically-controlled mill that will allow them to print the lower receiver.

They can then purchase the other, less relegated elements of the AR-15 -- such as the stock, magazine, and barrel -- from online gun shops and create a fully functional automatic weapon that contains no serial number and required no background check. Such weapons are sometimes referred to as "ghost guns" -- hence, the name of Wilson's mill.

Selling such guns is illegal, but selling the means to produce them -- or making one -- is not.

"Typically," Wilson told Wired, "this has been the realm of gunsmiths, not the casual user. This is where digital manufacturing, the maker movement, changes things. We developed something that’s very cheap, that makes traditional gunsmithing affordable. You can do it at home.

"This is a way to jab at the bleeding hearts of these total statists," he added. "It’s about humiliating the power that wants to humiliate you."

Wilson's new project is a direct response to the so-called "Ghost gun ban" bill introduced by California state senator Kevin de Leon. The bill would criminalize using a 3-D printer to print or finish a lower receiver without a government serial number.

"This wouldn’t be worth doing if Kevin de Leon didn’t know about it," Wilson said. "What excites me is giving this world to the politicians. Our strategy is to literalize and reify their nightmare, to give them the world they’re talking about."

It was vetoed by Governor Jerry Brown on Tuesday, who said that he "can’t see how adding a serial number to a homemade gun would significantly advance public safety."

Watch a video on the Ghost Gunner via Defense Distributed on YouTube below.