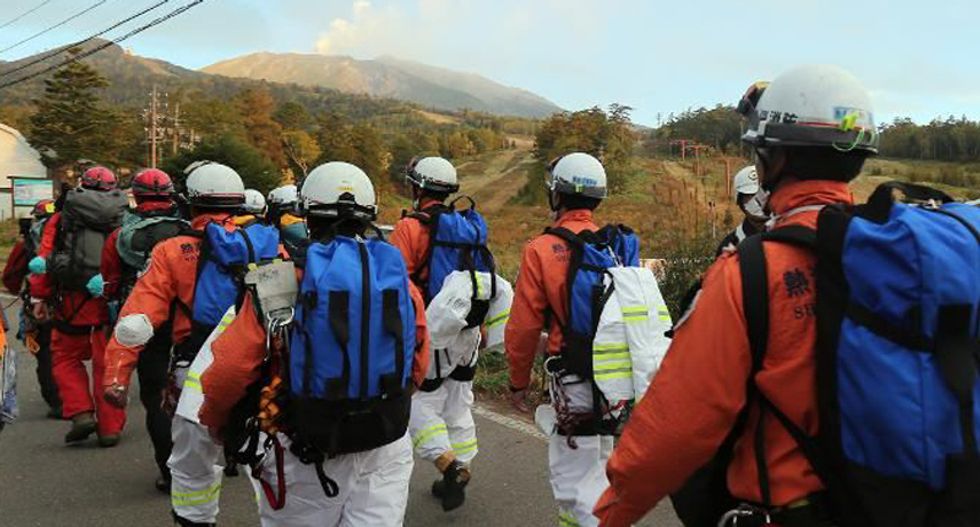 Rescue workers and police climb Mount Ontake from Otaki village in Nagano prefecture, on October 4, 2014, one week after the volcano erupted (AFP)

Authorities found four more bodies on a still-smouldering Japanese volcano Saturday as they resumed a search stalled by heavy rain, but a typhoon threatened to further hamper the recovery operation.

Local authorities said Friday that 16 people remained unaccounted for on Mount Ontake, which erupted a week ago. It was not immediately clear if the four bodies found Saturday were included in that figure.

The bodies of 47 other victims have already been retrieved from the mountain, in Japan's deadliest eruption for almost 90 years.

Rescue workers have spoken of up to half a metre (20 inches) of thick, sticky ash smothering the slopes, with some of the dead found half-buried, leading to fears others may be entombed.

"Rescuers found a total of three more people in cardiac arrest today, and are now preparing to carry them down," said a police spokesman Saturday in Nagano, central Japan, where the volcano sits.

In Japan only doctors can declare someone officially dead, so first responders typically report that someone's heart has stopped and they are not breathing.

Police later said another body was found near the summit shortly before the search operation finished for the day.

Some 930 troops, firefighters, police restarted their search Saturday morning after heavy rain had suspended their recovery operation on Thursday afternoon.

Television footage showed soldiers in camouflage with gas masks hurriedly getting on a military helicopter departing to the peak, while scores of rescuers were carefully slushing up an ash-covered path to the summit.

Rescuers were using hand-held metal detectors and sticking poles into the ground in a bid to find victims possibly buried under the ash.

Mount Ontake was packed with walkers when it burst angrily to life a week ago. Many would have been there to witness the spectacular colours of the countryside as it turned to autumn.

Local residents, government officials and rescuers standing by near the base of the mountain prayed in silence for one minute at 11:52 am (0252 GMT) Saturday, the exact moment when the volcano exploded seven days earlier.

The volcano continues to belch steam and poisonous fumes, making a section near the crater inaccessible.

Meanwhile, a powerful typhoon looming off the Japanese coast looked set to batter the country over the coming days, a further reminder of the island nation's vulnerability to the wrath of nature.

Typhoon Phanfone, located some 120 kilometres east of Minamidaito island, is predicted to slam into Japan with strong winds and high waves this weekend or later, the meteorological agency said.

Packing gusts of up to 252 kilometres (156 miles) per hour, Phanfone moved northwest in the Pacific toward Japan's southwest at a speed of 15 kilometres per hour.

That could force the recovery to be put off for days, heaping anguish on the families of those still missing, who are gathered at the foot of the volcano.

"We are scheduled to restart the operation tomorrow morning as a number of people are still unaccounted for," a Nagano prefectural official said.

"But we are concerned about the weather as a typhoon is approaching Japan's main island," the official said.