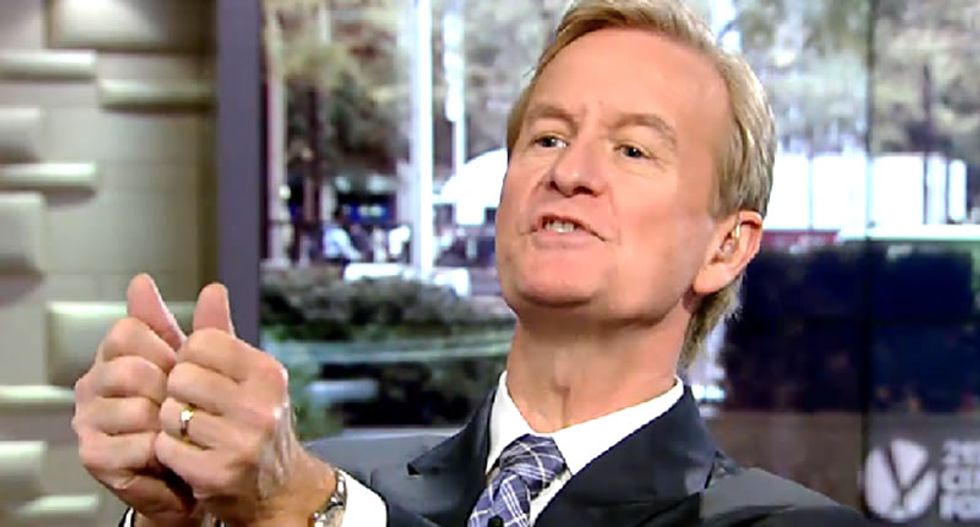 On Fox & Friends this morning, Steve Doocy and "America's Lawyer," Peter Johnson Jr., tried to connect libertarian groups like Copwatch and Cop Block to statements made by Attorney General Eric Holder and President Barack Obama about the shooting of Michael Brown in Ferguson, Missouri.

"Is this cynicism and distrust of police coming from the very top of the criminal justice chain?" he asked. "Watch," he said, throwing to a clip of Holder saying that he "wants the people of Ferguson to know" that he "understands that mistrust" between citizens of a community and police.

Johnson then played a clip of Obama speaking before the United Nations, in which he noted that "the eyes of the world were upon the small city of Ferguson, Missouri, where a young man was killed, and a community was divided" and admitted that there are "racial and ethnic tensions" in America.

"So groups like Copwatch and Cop Block," Johnson said -- without drawing any connection between his point and the clips he juxtaposed it with -- "are taking to the streets and taping police officers."

Copwatch was founded in 1990, Cop Block in 2010, and neither organization has ties to the Obama administration or Holder's Justice Department.

"They're just waiting for something to happen," Doocy replied.

"And sometimes they're getting arrested," John continued. "This has been a robust debate in the courts around the country -- do they have a civil right to do so? Most circuit courts say they do."

"But at the same time, are we creating such an environment for our police officers that we believe their actions are going to be suspect, are going to be criminal? Shouldn't we have more confidence," Johnson asked, "in their ability to do the right thing?"

"Sure," Doocy replied, "after Ferguson, a lot of people were saying, 'Why don't police offers wear little video cameras?' I like that idea. But if someone's just standing next to an officer with a camera saying, 'I'm not doing anything, I'm just waiting for you to do something stupid.'"

"You're right," Johnson responded. "There are studies that say it decreases violence, it decreases police abuse, that it's good all around. But the bigger question is, how intrusive, how disruptive, how dangerous is it to have squads of Americans going around saying, 'I'm going to watch you police officer,' 'I don't believe what you're doing,' 'you're a suspect inherently.'"

Watch the video via Fox News below.