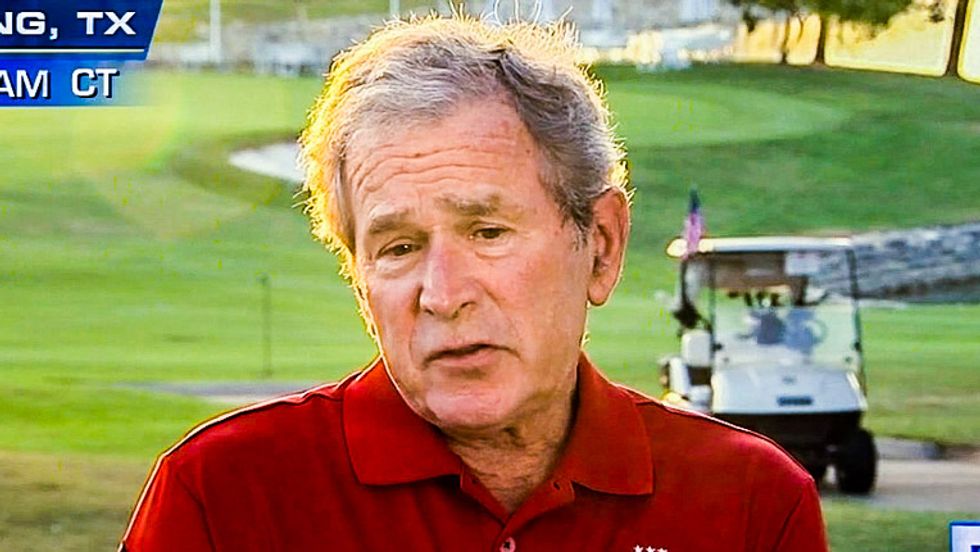 Fox News host Brian Kilmeade on Thursday invited President George W. Bush to weigh in on the ISIS Islamic militants who had taken control over much of Iraq, and wanted to know why President Barack Obama had not also sought out his advice.

During an interview to publicize the former president's effort to raise money for veterans by hosting an annual golf tournament in Texas, Bush told Kilmeade that the sacrifice of service men and women was worth it.

"The world is better off without Saddam Hussein in power or the Taliban in power," Bush opined. "We're still in Iraq, the presence wasn't as significant as it was in 2009... And now we've got pilots in harm's way dealing with a group of ideologues who murder the innocent. Same exact modus operandi of those who murdered 3,000 on our soil."

Kilmeade praised Bush for telling people in 2007 that "American troops will have to return at some later date to confront an enemy that is even more dangerous" if the U.S. withdrew from Iraq.

"How did you know?" Kilmeade wondered.

"Well, I know the nature of the enemy," Bush shrugged. "The long-term strategy just takes time. And I tell people all the time -- of the record, by the way -- that, you know, Condi Rice's relatives were enslaved in the greatest democracy ever for 100 years. A democracy takes time to take hold."

Bush, however, added that he wasn't going to second-guess the current president.

"Bloviating and second-guessing is, I don't think, good for the presidency or the country," he said. "He and his team will make the best informed decisions they can make."

Kilmeade noted that Bush had called former President Bill Clinton "at least twice a year" during his presidency.

"Has Obama called you?" the Fox News host asked.

Bush said that the president had called him before announcing to the nation that Osama bin Laden was dead, but did not call on a regular basis.

"Presidents tend to rely on the people they're close to, and he's got a team that he's grown close to over the six years he's been president -- or nearly six years -- and he relies upon their judgement," Bush explained. "And I understand that."