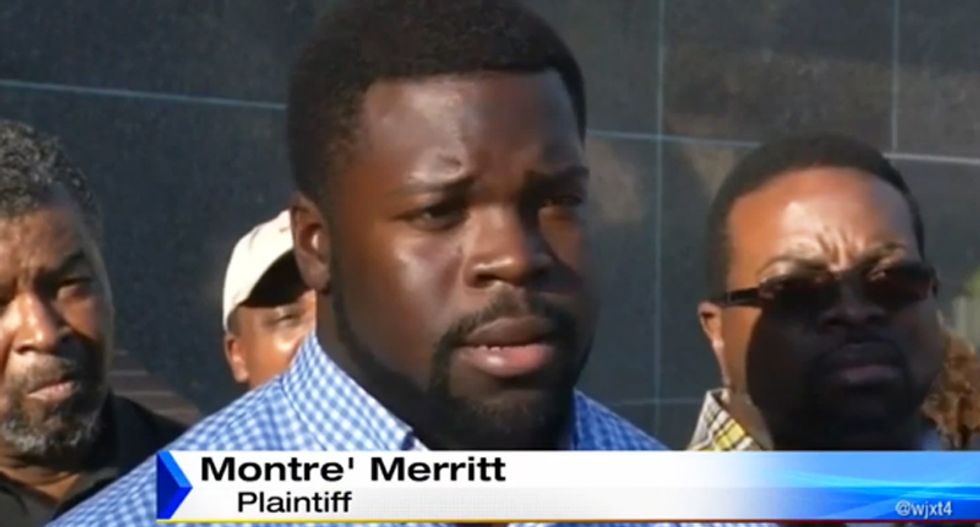 The family of high school athlete who was pulled over and forced to the ground at gunpoint over a seat-belt violation has filed a $12.5 million lawsuit against the Waycross, Georgia police department contending the officer involved was only given a slap on the wrist for his actions, according to News4GA.

Saying "I could have been another Trayvon Martin case," Montre' Merritt explained to reporters how the traffic stop in front of his home where officer Officer Cory Gay held a gun to his head and ordered him onto the ground still haunts him.

“That night when it happened, I felt like I could have been another Trayvon Martin case,” Merritt said. “And just hearing how Mike Brown went about his case for doing the right thing. He still got shot. I just feel like I don’t want any of my friends or family, I don’t want that to happen to anybody.”

According to the suit, Merritt was pulled over by Gay on Jan. 18, in front of his home and instructed at gunpoint to get out of his car and on the ground where Gay handcuffed him. When Merritt's mother came outside to see why her son was being arrested, the officer told her it was for a seat belt violation.

The Merritt family subsequently filed a complaint with the Waycross Police Department over Gay's actions.

Following an investigation by police authorities, Gay was found guilty of using excessive force and was suspended for five days without pay. Gay was also ordered to take Judgmental Use of Force Training.

Unhappy with Gay's punishment, the family filed the lawsuit against the police department.

Merritt, who now attends college, calls the humiliating arrest in front of his mother "painful."

“Coming from me being a huge role model in my community, to see my mom witness that. That was one of the most painful things I could ever imagine for her,” Merritt said. “The pain that I still feel. The tears that I still cry. Everything is just real in reality. I have to wake up with this on my heart and on my mind every day, and it hurts."

Watch the video below from News4 GA: