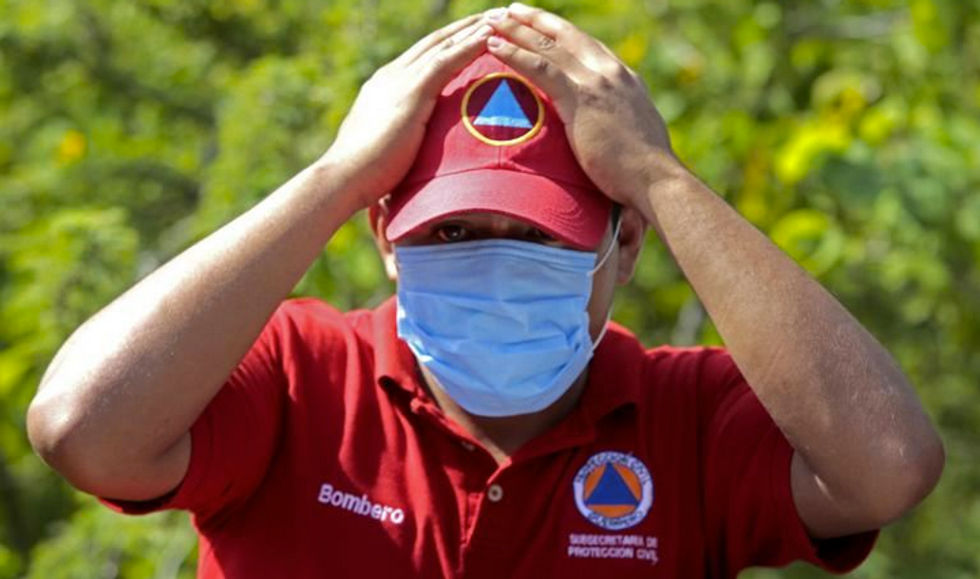 A member of the civil defense looks at the site of a mass grave in Pueblo Viejo, Mexico (AFP)

Two gang hitmen linked to police admitted to killing 17 of 43 students missing in southern Mexico, amid fears the victims were among bodies found in a mass grave.

Inaky Blanco, the chief prosecutor of violence-plagued Guerrero state, said Sunday it would take at least 15 days to identify the 28 bodies in the clandestine grave, some of which were badly burned and in pieces.

The site was found Saturday on a hill in Pueblo Viejo, an impoverished district of the city of Iguala, where the missing students were last seen on the night of September 26, some 200 kilometers (125 miles) south of Mexico City.

"A bed of branches and tree trunks was made, on which the bodies of the victims were laid and a flammable substance was used," Blanco said.

The students disappeared after Iguala municipal police officers shot at buses transporting them, and Blanco said the Guerreros Unidos gang participated in a night of violence that left six people dead, 25 wounded and 43 missing.

While the students are accused of having hijacked the buses, Blanco said the motive for the attack remains under investigation.

The case could become one of the worst slaughters that Mexico has witnessed since the drug war intensified in 2006, leaving 80,000 people dead to date, and the most horrific since President Enrique Pena Nieto took office in December 2012.

Earlier Sunday, some parents and hundreds of fellow students from the missing group's teacher training college blocked the highway between Guerrero's capital Chilpancingo and Acapulco, voicing anger at the authorities.

Some of the parents said they were shown pictures of the bodies but that they did not believe that they looked like their children.

"As parents, we reject this situation. It's not the youngsters. We know they're holding them alive," said Manuel Martinez, whose son is among the missing.

Relatives have given DNA samples to see if they match the bodies in the mass grave, while Blanco said the search for the missing would continue as long as the identities are not confirmed.

Survivors said the students had gone to Iguala to conduct fundraising activities and came under attack by police after they boarded three buses.

In all, three students were killed in the shooting and another three people died in an attack on a football team's bus outside Iguala later that night. Blanco said police and gang members were involved in both crimes.

Witnesses say several students, who are from a teacher training college known as a hotbed of radical protests, were whisked away in police vehicles.

It was Iguala's public security director, Francisco Salgado Valladares, who ordered two gang members to go to the site of the students' buses, Blanco said.

The two hitmen then received instructions from a Guerreros Unidos leader known as "El Chucky" to take the students and kill them, he said.

The gangsters made the students exit a bus. "They grabbed 17, took them to the top of a hill in Pueblo Viejo where they have clandestine graves and where they say they killed them," Blanco said.

'Land of the wicked'

Authorities have issued arrest warrants for the town's mayor and security chief, both of whom have disappeared.

Some 30 people have been detained over the shootings, including at least 22 police officers.

Authorities said the mass grave was located following interrogations of the suspects. Soldiers cordoned off the area. Officials said the pit was up a steep hill filled with thick vegetation.

In Pueblo Viejo, a hamlet surrounded by forests and mountains, a resident said the region is dominated by gangsters and that he had seen municipal police officers going up the hill in recent days, before authorities discovered the mass grave.

"They were going up there back and forth," said the resident, Jose Garcia, pointing to a location between two mountains where the graves were found. "This is the land of the wicked."