Hong Kong protesters gear up for biggest demonstration yet 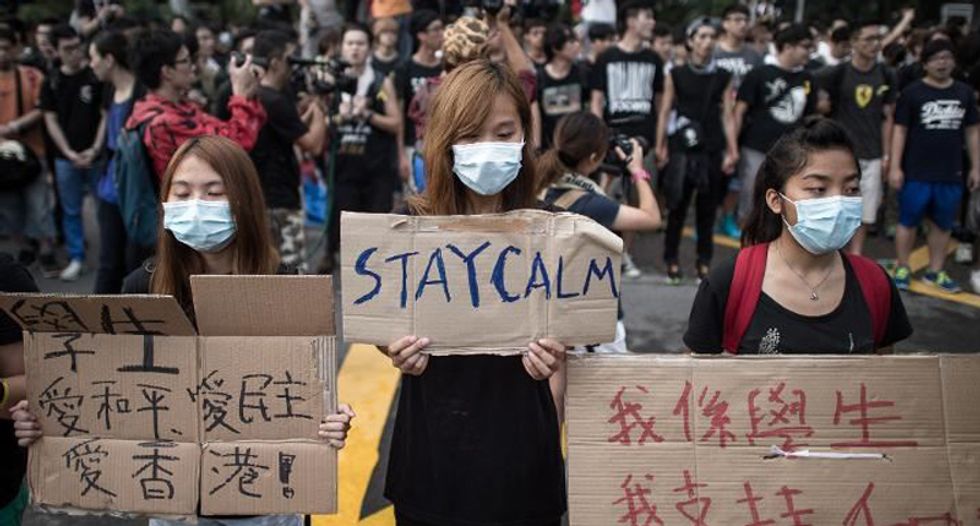 Hong Kong pro-democracy protesters chanted and booed outside a ceremony to mark the 65th anniversary of Communist China Wednesday, with crowds expected to reach their biggest yet as the city starts a two-day public holiday.

Politicians from Hong Kong and the mainland clinked champagne glasses to mark China's National Day while protesters campaigning for free elections gathered in the surrounding streets, after a third night of demonstrations.

Hong Kong leader Leung Chun-ying has faced mounting calls to resign and accusations of failing to engage with protesters after their "Umbrella Revolution" campaign for unfettered universal suffrage sparked the biggest civil unrest in decades.

As the Chinese and Hong Kong flags were raised at 8 am (midnight GMT) in Golden Bauhinia Square, in the downtown district of Wanchai, singing protesters were clearly audible.

The crowds booed as two helicopters flew overhead, one bearing a large Chinese flag and the other a smaller Hong Kong banner.

In a speech following the flag ceremony, Chief Executive Leung did not explicitly reference the protests that have brought swathes of the city to a standstill for days, instead calling for cooperation with China.

"Hong Kong and the mainland are closely linked in their development. We must work hand in hand to make the Chinese dream come true," he told dignitaries gathered at the city's convention centre.

"It is understandable that different people may have different ideas about a desirable reform package, but it is definitely better to have universal suffrage than not," he added.

"We hope that all sectors of the community will work with the government in a peaceful, lawful, rationally and pragmatic manner to... make a big step forward in our constitutional development".

Campaigning pro-democracy lawmaker Leung Kwok-hung, known as "Long Hair", was escorted out of the gathering by security for shouting "Hong Kong wants real elections, Leung Chun-ying step down!" just before the Chinese national anthem was played.

District councillor Paul Zimmerman who was inside the ceremony raised a yellow umbrella in support of the protests.

Protests outside the venue remained peaceful with lines of young demonstrators forming a buffer between the crowds and the police lines, though others voiced frustration at being held back.

One mainland demonstrator told AFP he had travelled by train to support Hong Kongers.

"It is a strong message that democracy is not brought by the Western world, but by the students, the locals," said David Zhang, a 24-year-old software consultant from the Chinese city of Dongguan.

"The Beijing government are afraid of change and uncertainty. If it happens that the Hong Kong people can elect their government, then they have control."

Many outside the ceremony had stayed through the night, braving thunderstorms and torrential rain.

Crowds are expected to swell as offices are closed for National Day Wednesday and the city sees another public holiday Thursday.

Beijing has been left grappling with one of the biggest challenges to its rule over the semi-autonomous city at a time when the Communist Party is cracking down hard on dissent on the mainland.

In his first public comments since demonstrators were tear-gassed by riot police on Sunday evening, chief executive Leung on Tuesday said the sit-in -- organised partly by the Occupy Central group -- was now "out of control" and asked them to "stop this campaign immediately".

But protest leaders rejected Leung's demands and renewed calls for the Beijing-backed leader to step down.

"We have destroyed the values of Hong Kong earlier this weekend by shooting tear-gas," district councillor Zimmerman said Wednesday.

The most intense civil unrest Hong Kong has experienced since its 1997 handover from British rule was sparked by Beijing's decision in August to restrict who can stand for the city's top post.

Hong Kongers will be able to vote for their next chief executive in 2017 but only two or three candidates vetted by a pro-Beijing committee will be allowed to stand.

Protesters have two demands -- that Leung step down and Beijing rescind its insistence that his successor be vetted.

But Beijing has stayed defiant, saying it supports Hong Kong's handling of the protests, while analysts say the chance of the Chinese government backing down is virtually non-existent.