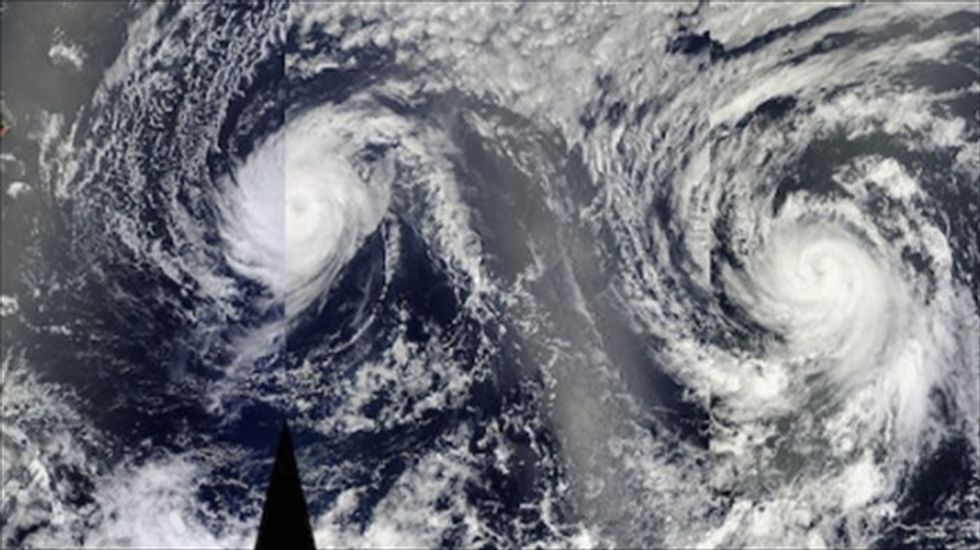 (Reuters) - A hurricane churning past Hawaii on Saturday pummeled the Pacific archipelago with heavy rain, strong gusts and dangerous surf but was skirting the islands without making a direct hit, the National Weather Service said.

Hurricane Ana was still a hurricane but losing strength as it carved a path across the Pacific Ocean roughly parallel with the Hawaiian Islands, with its eye staying about 150 miles (240 km) to the south of the Big Island, according to forecasters.

Ana, a Category 1 storm, had maximum sustained winds of about 80 miles per hour and was predicted to drop to tropical storm status on Sunday, the National Weather Service said.

"Hurricane Ana will continue to bring potential for heavy rain, windy conditions and a chance of thunderstorms through the rest of the weekend," the NWS said in a release.

"A more stable and drier trend will begin establishing in the wake of Ana early next week," it said.

No hurricane has landed a direct hit on Hawaii since Iniki, a Category 4 storm that struck in September 1992, killing six people and causing damage estimated at $2.4 billion. Hurricanes range in severity from Category 1 to catastrophic Category 5.

Ana was bringing bands of heavy rain, dangerous surf and gusts to most areas, with scattered power outages reported. A flash flood warning was in effect for the entire state until 6 p.m. local time Sunday, the NWS said.

Oahu, the most populated of the Hawaiian Islands, opened its emergency operations center on Friday and Mayor Kirk Caldwell had said he would make a decision on opening shelters and closing beaches throughout the weekend.

"I urge Oahu residents to prepare by storing food and water for up to seven days, making sure their flashlights work, and having a family disaster plan," Caldwell said.

Hawaii Governor Neil Abercrombie signed an emergency proclamation for the state on Wednesday, and classes at the University of Hawaii West Hawai'i Campus have been canceled.

In August, Tropical Storm Iselle pummeled the Hawaiian Islands with high winds and heavy rain, forcing hundreds of people to seek shelter and knocking out power to more than 20,000 residents.

(Reporting by Victoria Cavaliere in Seattle; Editing by Frank McGurty and James Dalgleish)