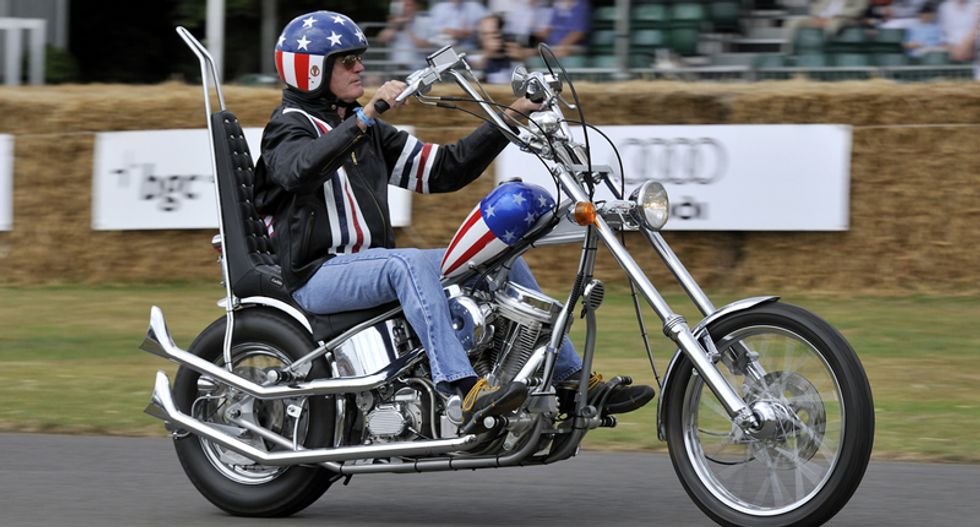 Despite questions over its authenticity, the last remaining 'Captain America' chopper from the 1969 movie "Easy Rider" sold at auction Saturday night for $1.35 million.

According to the LA Times, with auction fees, the final cost was more than $1.6 million.

The chopper, ridden by the film's star and producer Peter Fonda in the landmark counterculture film, is believed to be the last of the four choppers built for the film.

The purchaser of the bike,  put up for auction by Los Angeles realtor and movie memorabilia collector Michael Eisenberg, was not identified.

While some have questioned the authenticity of the Harley-Davidson, Eisenberg said that he became convinced it was the last remaining  "Easy Rider" motorcycle by actor Dan Haggerty, best known for his role on television as 'Grizzly Adams.' Haggerty had a bit part in the movie and helped work on the four motorcycles used in the film. According to Haggerty, the other three choppers were either stolen or sold for parts prior to the film's release. Haggerty claims he helped rebuild the auctioned off bike from the wreckage of the fourth bike which was nearly destroyed while filming the film's finale.

Owner Eisenberg and auction house Profiles in History have cited Haggerty as their principal authenticator of the bike, despite Haggerty's admission to The Times that he had already sold and authenticated a different 'Captain America' bike years before with written assurances to its new owner that it was the remaining "Easy Rider" chopper.

Fonda, who co-wrote the film's screenplay and provided the original sketch on which the chopper was based, told The Times he was  concerned by Haggerty's previous authentication and hoped the auction would be called off.

"There's a big rat stinking someplace in this," Fonda said.

According to the auction house the bidding began at $1 million and within minutes rose to the final sale price of $1.35 million.

"Easy Rider" told the tale of two cocaine smugglers attempting to ride cross-country by motorcycle to New Orleans after a big sale, was the third highest grossing film of 1969, with a box office take of $60 million.

Intro to Easy Rider, uploaded to YouTube by Krzysztof Zajkowski: