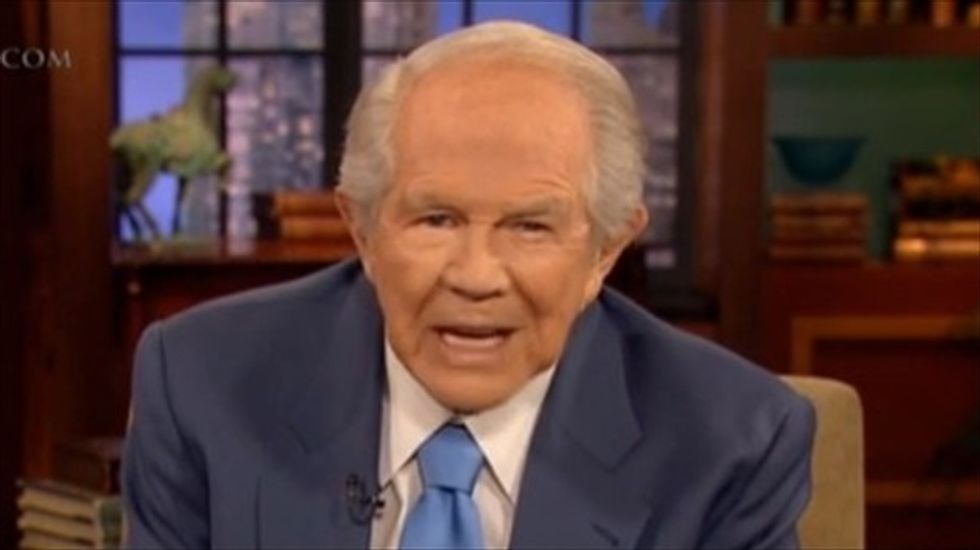 While we liberals are getting our panties all up in a bunch over racist Halloween costumes, the Christian Right is focusing on... the family... as usual... and the much more important issue that is the evil and sinful nature of Halloween. To spread the gospel on the perils of the holiday, I present these five eloquent quotes against Halloween. Consider yourself warned!

When Pat Robertson urged his viewers to abstain from Halloween on "The 700 Club,” he made a pretty good case:

Halloween is a festival for demonic spirits... The whole idea of trick-or-treating is the Druids would go to somebody’s house and ask for money and if they didn’t get money they’d kill one of their sheep, that was the sheep and it was serious stuff. All this business about goblins and jack-o’-lanterns all comes out of demonic rituals of the Druids and the people who lived in England at that particular time.

Kimberly Daniels of Kimberly Daniels Ministries International, "an apostolic outreach to the nations," had this to say in an article published on Pat Robertson's website:

The danger of Halloween is not in the scary things we see but in the secret, wicked, cruel activities that go on behind the scenes. These activities include:

Rape and molestation of adults, children and babies

Conjuring of demons and casting of spells

Release of "time-released" curses against the innocent and the ignorant.

3. Why the LGBT love Halloween and demon contact is quite possible.

Linda Harvey of Mission America explained that one of the first signs the holiday is so evil is because  "it’s a huge celebration in the LGBT world, especially for the gender-confused folks." It's also  "a seduction that says, ‘don’t be afraid, do whatever you want, there’s nothing to fear,’ it’s one of Satan’s oldest tricks." Harvey has a lot more to say about the dangers of Halloween:

Costume parties are fun but these costumes may even disguise our very souls. Most Christians with a sincere faith acknowledge that there is a demonic realm and that Satan and his minions are at work in the world to deceive humans, so why wouldn’t Halloween provide an extremely useful too.... ‘But it’s just for fun,’ parents will say, ‘God understands my children are not serious.’ Really? Do your kids know how risky these practices are and that real contact with real demons is quite possible. Satan doesn’t care about our intentions; he will take any willing participant.

4. Spell-casting is not a joke in God's eyes.  The countless members of the Duggar Family are big critics of the holiday, and they're not afraid to speak for god, whose sense of humor they apparently know extremely well. As sisters Jill, Jessa,  Jana and Jinger write in their masterpiece Growing Up Duggar, "Magic, sorcery, witches, spell-casting and the like are all part of the demonic realm that God wants us to stay away from. One specific thing that our parents have always been careful about is magic, which often shows up in children's movies. As harmless as it may seem, it's not a joke in God's eyes,"

5. A time to put the dark side on the defensive and pray for the Reformation, which apparently hasn't happened. American "theologian" and the president of Southern Baptist Theological Seminary in Louisville, Kentucky, has some great ideas about how to respond to Halloween:

The coming of Halloween is a good time for Christians to remember that evil spirits are real and that the Devil will seize every opportunity to trumpet his own celebrity. Perhaps the best response to the Devil at Halloween is that offered by Martin Luther, the great Reformer: “The best way to drive out the devil, if he will not yield to texts of Scripture, is to jeer and flout him for he cannot bear scorn.”

On October 31, 1517, Martin Luther began the Reformation with a declaration that the church must be recalled to the authority of God’s Word and the purity of biblical doctrine. With this in mind, the best Christian response to Halloween might be to scorn the Devil and then pray for the Reformation of Christ’s church on earth. Let’s put the dark side on the defensive.