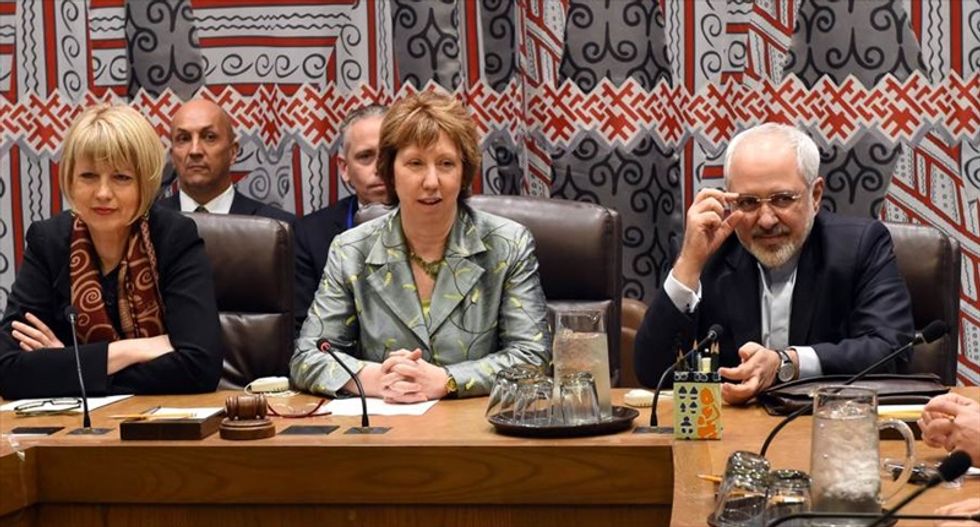 EU foreign affairs chief Catherine Ashton and Iran's FM Mohammad Javad Zarif attend a meeting of the internal E3+3 meeting at the United Nations in New York on Sept. 19, 2014. By Timothy A. Clary for Agence France-Presse.

Iran's supreme leader Ayatollah Ali Khamenei reiterated on Wednesday his country's "red lines" in negotiations with world powers over its controversial nuclear programme due to resume next week in Vienna.

Ashton will first hold bilateral talks next Tuesday with Zarif, as is customary ahead of each round of nuclear negotiations, and a three-way meeting is to be held the next day on Oct. 15, her spokesman Michael Mann said.

Top-level U.S. diplomats would also meet with their Iranian and EU counterparts on October 14 ahead of the trilateral ministerial talks, a US official said, also confirming the trilateral talks.

"Our focus... is determining whether it's possible to reach an agreement by November 24 that effectively closes down Iran's pathways to nuclear materials for a nuclear weapon," State Department spokeswoman Jen Psaki told reporters.

U.S. officials "continue to believe that there is still adequate time to work through these issues and arrive at a comprehensive agreement that will give the international community assurances that Iran will not acquire a nuclear weapon," she added.

After failing to reach an initial July deadline, Iran and the P5+1 group of nations -- China, the United States, France, Britain, Russia and Germany -- have set November 24 as the date to strike a deal guaranteeing that Tehran's nuclear programme is used for exclusively peaceful means.

But talks have stalled over the issue of Iran's future capacity for uranium enrichment and the timetable for the lifting of international sanctions against Tehran.

"We still don't have an understanding of the major issues, so that's what the purpose of the discussion is," Psaki said, adding there would be "many more meetings" including at expert level as they seek to hammer out a deal.

An infographic published on Khamenei's official website outlined 11 points to be observed by negotiators before Iran will sign an accord.

One of the stipulations includes "the absolute need for Iran's uranium enrichment capacity to be 190,000 SWU (Separate Work Units)" -- close to 20 times its current processing ability.

Iranian officials say this is needed to produce fuel for its Bushehr reactor, which is being provided by Russia until 2021.

The U.S. and other Western states, however, want Iran to decrease its enrichment capability.

"Fordo, which cannot be destroyed by the enemy, must be preserved," the text on Khamenei's website said, referring to the uranium enrichment site built under a mountain 100 kilometres (60 miles) south of Tehran.

"The work of nuclear scientists should in no way be stopped or slowed," the text said, adding Iran had the right to pursue nuclear "research and development".

Iran and the so-called P5+1 group signed a preliminary accord in November 2013 that froze some Iranian nuclear activities in exchange for a partial lifting of international sanctions.

Eight days of intensive talks at the end of September between Iran and the P5+1 group on the sidelines of the UN General Assembly in New York also fell short of any final agreement, with the United States saying there were still serious gaps between the sides.