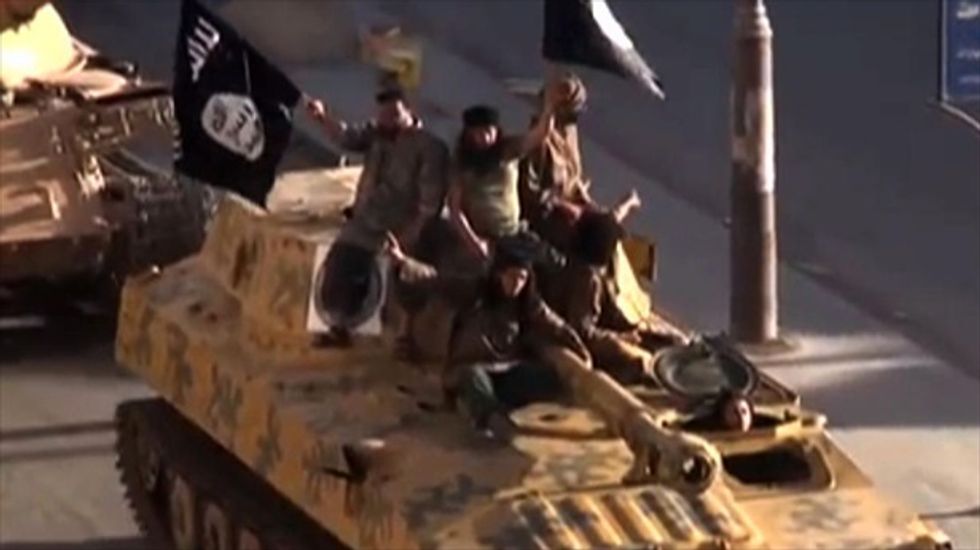 A screen grab taken from a video released on July 1, 2014, allegedly shows members of the Islamic State parading on top of a tank in Syria (AFP)

The Islamic State jihadist group on Friday claimed responsibility for the murder of British aid worker Alan Henning in a video showing his apparent execution.

In the video, almost identical to those released after three previous murders, a masked IS militant also displays a hostage he identifies as an American, Peter Kassig.

The video, found online by the SITE private terrorism monitor, opens with a news report about the British parliament's vote last week to authorize air strikes against jihadist targets in Iraq.

Then it cuts to Henning, on his knees against a desert backdrop and wearing an orange prison-style outfit, with a masked militant standing over him wielding a combat knife.

Henning explains to camera that as a member of the British public, he is being made to pay the price for the parliamentary vote.

Then the jihadist, who has the same British accent as the killer in a previous IS video of the death of British hostage David Haines, addresses Britain's Prime Minister David Cameron.

"The blood of David Haines was on your hands, Cameron. Alan Henning will also be slaughtered, but his blood is on the hands of the British parliament," he declares, then cuts the hostage's throat.

After the beheading the video cuts to a similar scene in which the killer introduces a man as Kassig, reportedly a 24-year-old US aid worker who had gone missing in Syria.

"Obama, you have started your aerial bombardment in Sham, which keeps on striking our people," the militant says, using the Arabic term for Syria and the Levant.

"So it is only right that we continue to strike the necks of your people."

The video ends with the second hostage apparently unharmed.

Previous IS victims have been threatened in this way before appearing around two weeks later in videos of their murders.