Israel reopens Al-Aqsa mosque, but only to men over 50 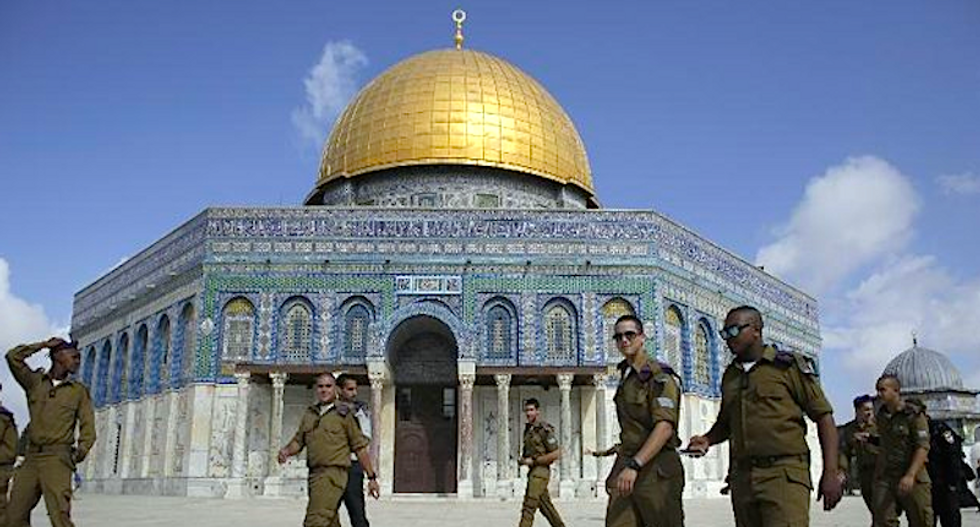 Israeli soldiers walk in front of the Dome of the Rock in the Al-Aqsa mosque compound, in Jerusalem's old city on October 19, 2014 (AFP)

Israeli police deployed heavily around Jerusalem's flashpoint Al-Aqsa mosque compound as it reopened Friday for Muslim prayers after a rare closure during clashes over the killing of a Palestinian by security forces.

The streets of east Jerusalem were calm before the prayers at midday but teeming with additional police, including many in riot gear, after an Israeli clampdown on the compound, which is holy for Muslims and Jews alike.

Clashes had erupted early Thursday when Israeli police shot dead a Palestinian accused of trying to kill Yehuda Glick, a hardline rabbi linked to tensions at the compound.

The closure was the first for decades and prompted a spokesman for Palestinian president Mahmud Abbas to condemn the move as an Israeli "declaration of war."

Police spokeswoman Luba Samri said that because of fears of unrest at the midday prayers, entry for Muslim men would be restricted to those over 50.

Hundreds of police were seen manning a series of checkpoints leading from the Old City's outer gates all the way to the Al-Aqsa compound, an AFP correspondent said.

Ordinary and riot police officers checked identity papers of people passing between the barricades, both those on their way to pray at the site and those who worked nearby.

Female officers were deployed to stop and search Muslim women.

Zuheir Dana, 67, said he was unable to get from his shop to his home.

"I wanted just to get home, which is about 50 metres (yards) away from the Al-Aqsa compound, but police didn't let me through," he said.

"It's been bad every day here since Ramadan," he added, referring to the Muslim holy month which this year fell in July.

Markets in the Old City, normally bustling on a Friday morning, were nearly deserted due to the security lockdown.

Additional police were deployed around the Al-Aqsa compound in the heart of the Old City, with media reporting the presence of some 3,000 officers, three times more than usual.

The Al-Aqsa mosque compound -- known to Jews as the Temple Mount -- is the third holiest site in Islam and Judaism's holiest.

The funeral of Muataz Hijazi, who was suspected of shooting and critically wounding the rabbi on Wednesday night, passed off without incident, she added.

The hospital treating Glick said the Jewish hardliner's condition was slightly improved Friday but that his life was still in danger.

Jerusalem has been shaken by months of unrest sparked by the murder of a Palestinian teenager in July in revenge for the killings of three Jewish teenagers in the West Bank.

A 50-day war between Israel and Palestinian militants in Gaza in July and August intensified protests and clashes in the Holy City.

The Al-Aqsa compound and adjacent east Jerusalem neighborhoods outside the Old City walls have been the scene of the latest violence in the city, and the site itself is a rallying point for Palestinian resistance to what they perceive as Jewish attempts to take control of it.