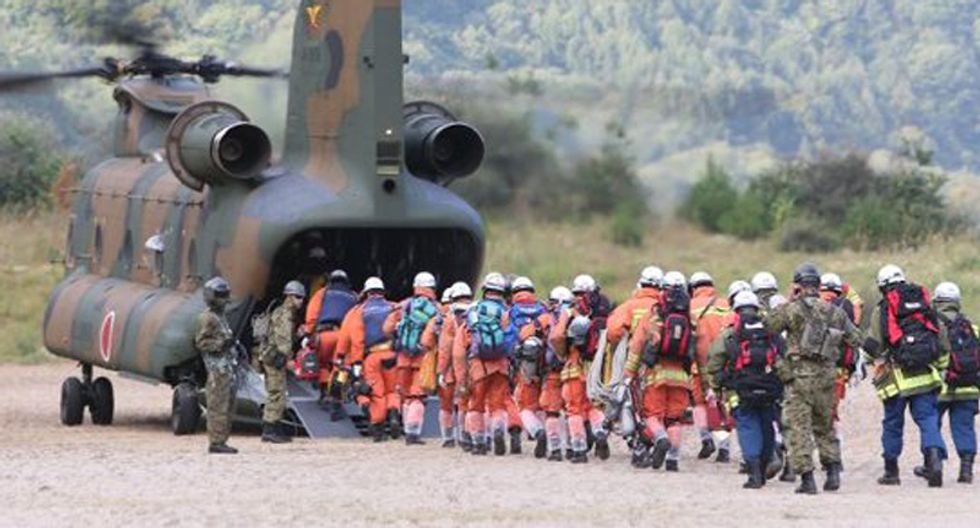 Rescue workers board a defense force helicopter heading for Mount Ontake during a search operation on October 1, 2014 following a volcanic eruption near Otaki village in Nagano prefecture (AFP)

The death toll from a sudden volcanic eruption in Japan hit 48 on Wednesday as rescuers discovered 12 new bodies in so-far unexplored areas of the ash-covered peak.

The figure makes the eruption of Mount Ontake, which was packed with hikers when it burst angrily to life on Saturday lunchtime, the worst volcanic disaster in Japan for almost 90 years.

Up until Sunday 36 bodies had been found, but many of these remained on the ruptured mountain as toxic gas and the risk of further eruptions forced emergency workers to suspend operations.

The grim news of more deaths came after media reports earlier suggested as many as 20 people remained unaccounted for, with an area of the volcano still spewing steam and gas.

Some of the around 1,000 troops, police and firefighters combing the volcano succeeded in bringing down 14 more of the bodies that were discovered on Sunday, with another 10 still there.

An official at Nagano prefecture's crisis management office said helicopters had been used to ferry the dead from the mountain, whose pockmarked lunarscape bears witness to the huge volume of ask and rocks flung from the volcano.

"We believe there are more people still missing, but we don't know how many they are," he added.

Broadcaster NHK said earlier in the day rescuers had seen more bodies that they had not yet been able to access.

Hiking is a hugely popular pastime in Japan, with mountain trails promoted by tourism officials who ask walkers to sign in when they begin their trek and sign out again when they finish.

But a local tourism association told the Asahi Shimbun that usually only 10 to 20 percent of hikers register before entering the mountains in high season.

The report said 327 hikers had registered their presence on Mount Ontake at the time of the eruption.

Rescuers are hoping that many of those who cannot be contacted simply forgot to let mountain managers know they were safe.

Nagano prefecture has posted a notice on its website calling for information on hikers on the list.

However, there exists the grisly possibility that many more perished.

"We don't know if there are people buried deep down under accumulated ash," a senior police official told the Asahi.

The local fire department said 71 people are missing, while the Nagano prefectural police have received hundreds of reports of people whose whereabouts are unknown, a police spokesman told AFP.

Authorities cautioned that some of these reports would likely have nothing to do with the disaster, which happened without warning during a busy weekend.

Hundreds of people were on the slopes of the volcano as rocks, ash and smoke poured from the fractured crater. Many made it down safely, but dozens were trapped on the peak.

Autopsies conducted on the first 12 people whose bodies were retrieved showed they all died from injuries caused by rocks hurled high into the air by the eruption.

Aerial footage showed a sticky blanket of ash smothering the upper slopes. Craters that appeared to be up to a metre (three feet) across revealed where some of the projectiles had landed.

The roof of one of the huts near the caldera, where hikers are believed to have sought shelter, had been punctured by rocks as they plunged back to earth.

Volcanic tremors have been detected constantly since Saturday's eruption, with underground water boiling into steam and breaking or moving rocks, a vulcanologist at the meteorological agency said.

The agency warned Wednesday the eruption was still under way, and noted that smoke had been seen issuing from the volcano as of 9:00 am (0000 GMT).

Until Wednesday the single biggest death toll from a volcano was 43 when Mount Unzen erupted in southwestern Japan in 1991.

In 1926, 144 people were left dead or missing after the eruption of Mount Tokachi in northern Japan, according to Japan's meteorological agency.