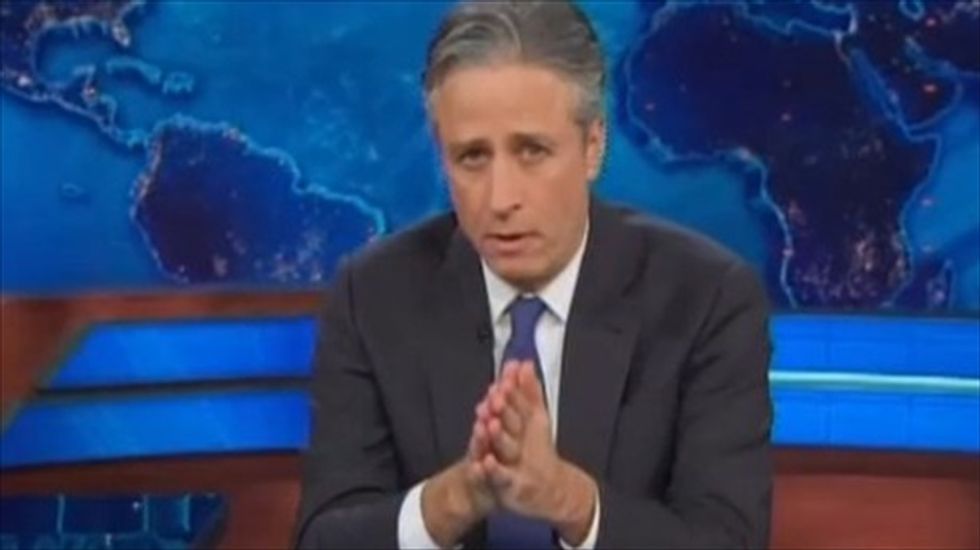 By Rep. Pete Sessions' (R-TX) own logic, Daily Show host Jon Stewart suggested on Monday, Texas should be placed under quarantine instead of western African nations.

"Oh my God, do you know what this means?" Stewart asked. "Congressman Sessions is carrying a dangerously mutated, sanity-resistant strain of fear that has now gone airborne."

Stewart pointed out that, while Sessions was calling for the quarantine in response to the death of Eric Duncan from Ebola, that Texas -- the state with the lowest amount of people with health insurance in the U.S. -- had suffered measles, whooping cough and flu outbreaks on top of Gov. Rick Perry's (R) refusal to allow the state to participate in the health exchanges implemented through the Affordable Care Act.

"All right, Texas, here's the deal," Stewart offered. "We can build that border fence you've always wanted -- we're just gonna do it a little farther north."

Sessions objected to CNN medical contributor Sanjay Gupta's assessment that travel bans against West African countries would not help quell the Ebola outbreak there. Gupta explained that such a move would stop officials from being able to monitor prospective patients, since they would only seek treatment by land and be harder to track.

"I'm a member of Congress from Dallas, Texas, and the United States of America," Sessions said. "And my job is to speak for and to help Americans."

Sessions wasn't the only one refusing to listen to actual medical experts, Stewart said, pointing out that news networks have been conflating a pair of cases of the disease in the U.S. with a full-on outbreak. despite several guests reminding them otherwise.

"What is wrong with you people?" Stewart demanded.