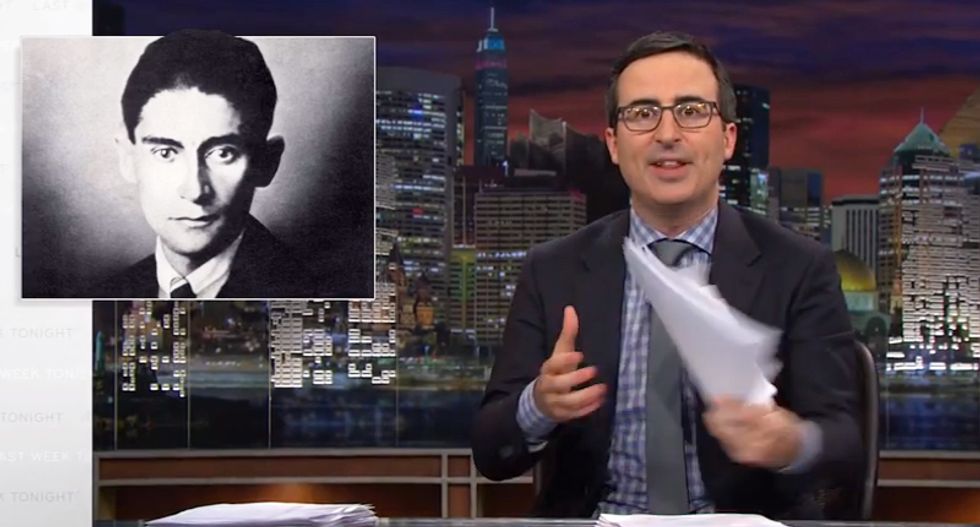 On Last Week Tonight, host John Oliver turned to the serious problem facing foreign translators attempting to leave their countries when faced with the possibility of death for helping American forces.

Displaying a massive stack of paperwork the State Department requires to set in motion a process that can take years, Oliver called it a "'bureaucratic clusterf*ck,"  stating that even author Franz Kafka wouldn't want his name associated with it.

"If you are in a war-zone, accurate translation can be the difference between life and death." Oliver explained. "And over the last decade good local interpreters in Afghanistan and Iraq have saved countless American lives."

Oliver then showed a clip of an Afghani man translating and explaining the presence of IED's to American soldiers.

"That is a good message to get exactly right," Oliver said. "You don''t want someone saying 'To be honest my Pashtu is a little shaky, but there is either an IED or an Ikea over by those rocks over there."

According to Oliver, the U.S. government has set up special programs allowing foreign translators in war zones to request a visa to emigrate to the U.S. since their lives might be in danger once American forces leave their countries. Yet, in 2011, despite the availability of 1,500 visas the U.S. only issued three.

"The number of visas for Afghanis who risked their lives for us should not be so low that relatively stupid toddlers can count up to it," Oliver stated.

Oliver then displayed  the ridiculously voluminous stacks of documents required by the State Department to acquire the visas -- adding the applicant must also go through a visa interview, medical examination, security clearance and "paying out of pocket for passports, vaccinations and plane tickets " --  before proclaiming, "You get to come to America! Or, as one translator discovered: not."

Oliver then shared a clip of a translator who had been approved for a visa and was still waiting for it after nine months because it was later denied.

"What the f*ck!' Oliver exclaimed. "By now the ghost of Franz Kafka is thinking 'Don't you dare call this Kafkaesque! I don't want my name anywhere near this sh*t. Because, compared to this, waking up as a cockroach is normal."

He then related the story of a donkey named Coal who wandered onto an Afghan base and how servicemen were able to get a visa in only four months compared to the years it takes the translators to navigate what Oliver termed a "bureaucratic clusterf*ck."