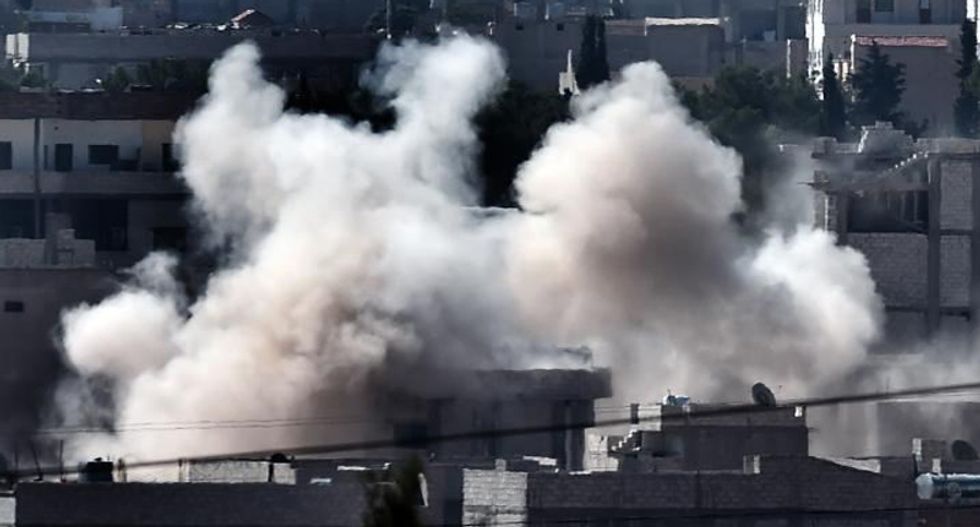 Smoke rises from the Syrian town of Ain al-Arab, known as Kobane by the Kurds, seen from the Mursitpinar border crossing on the Turkish-Syrian border, on October 5, 2014 (AFP)

A female Kurdish fighter carried out a suicide bomb attack against jihadists from the Islamic State group outside the embattled Syrian border town of Kobane on Sunday, a monitor said.

The Syrian Observatory for Human Rights said the woman blew herself up at an Islamic State position east of the city, killing a number of jihadists who have surrounded Kobane and are battling to seize it.

"The operation caused deaths, but there is no confirmed number," Observatory director Rami Abdel Rahman said.

He said it was the first reported instance of a female Kurdish fighter carrying out a suicide bombing against the Islamic State group, which has itself often favoured the tactic.

IS began its advance on Kobane, Syria's third largest Kurdish town, on September 16, seeking to cement its grip over a long stretch of the Syria-Turkey border.

The fighting around the town, also known as Ain al-Arab, has prompted a mass exodus of residents from the area, with some 186,000 fleeing across the border into Turkey.

Flight attendants have been subject to unprecedented harassment over masks and more during the pandemic, and a U.S. House panel on Thursday heard the raw details of those “air rage" incidents.

While there's no hard data, the leader of the flight attendants' union said the most aggression appears to occur in Southern states where there's been pushback against mask mandates.

U.S. Rep. Liz Cheney (R-WY) admitted she was wrong when, in 2013, she very publicly came out against same-sex marriage despite her sister being a lesbian who is married to a woman and raising two children together. But some in the LGBTQ community, along with activists and allies, are still skeptical, pointing to her record on related issues.

"I was wrong. I was wrong," Cheney told "60 Minutes" in an interview that aired Sunday evening, but she also continued to insist marriage equality is a "very personal issue," while it is actually a civil rights issue. She called it "very personal for my family," saying, "I believe that my dad was right. And my sister and I have had that conversation."