Kurds put a bullet through Islamic State jihadist's head after he refuses to stop begging for death: report 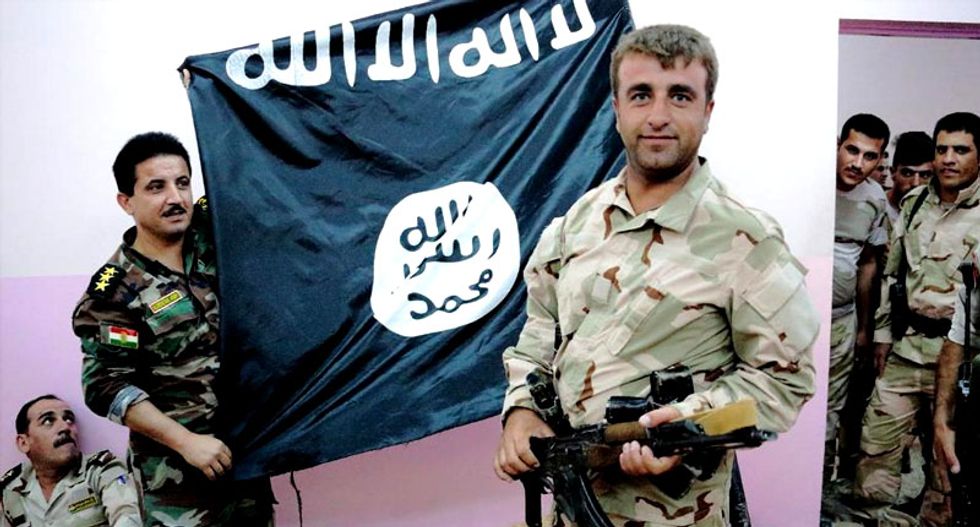 Members of Iraqi Kurdish Peshmerga forces pose in front of an Islamic State (IS) flag which they took from IS fighters at a military post, about 30 kilometres (19 miles) north of the northern Iraqi city of Kirkuk, on September 13, 2014 (AFP Photo/Guillaume Briquet)

Kurdish grocer Cuneyt Hemo remembers the moment he crossed paths with a jihadist Islamic State (IS) prisoner inside the besieged Syrian town of Kobane.

"He begged us to kill him so he could go to paradise and be rewarded," Hemo told AFP, in a rare glimpse of life inside the town which has been fought over street by street for nearly a month.

Hemo, 33, is one of an estimated 200,000 mainly Kurdish Syrians who have fled the onslaught of Islamic State (IS) militants on Kobane to the relative safety of Turkey.

The jihadist was captured by Kurdish fighters during fierce close-quarters fighting for control of the town on the Turkish border.

He was held for a day and, according to Hemo, was ultimately killed by his captors.

"We captured him in the street," said Hemo, dragging on a cigarette in the Turkish border town of Suruc, where along with other Kobane refugees, he has found sanctuary.

"He said he came from Azerbaijan. He was in his 20s and spoke to us in Arabic," he added. The fighter was dressed in full camouflage gear.

The extraordinary encounter -- which AFP cannot independently verify -- marked a rare moment that a Kurdish civilian stood face-to-face with an IS fighter, who have been glimpsed by the outside world largely only as distant figures seen from the Turkish border.

Hemo stayed in Kobane longer than most civilians, only moving over the Turkish border last week, some three weeks after the attack by the jihadists begun.

He said he was not one of the fighters battling with the Kurdish People's Protection Units (YPG) against the IS extremists.

Before the conflict, he worked at a grocery store in Kobane. But as a man of fighting age, he helped with supplies.

It was in that capacity that Hemo had the encounter with the jihadist, who was captured by the YPG during the street fighting for the western part of the town.

The bearded jihadist explained at length to his captors how he had come to Kobane to "deliver it from the kuffar" (the infidels).

"We asked him him why the jihadists were attacking us. He replied that we were kuffar (the infidels) and they had received the order to put us on the path of true Islam," he said.

Attempting to show the captured man that they were all adherents of the same religion, Hemo said that the YPG fighters took the man to a mosque in Kobane.

But even as a captive, the man remained inflexible, he said.

"We tried in vain to help him find reason. But he did not want to know anything," said Hemo.

"He said again and again that we were the infidel and he wanted to go to paradise to find the 40 women who had been promised to him," he added.

When his captors offered him something to eat and drink, the man refused and said that should he manage to escape he would blow himself up like his "brother" suicide bombers.

Hemo said he had still not understood the stubbornness of the jihadist and his disdain for death.

"He told us several times that he was happy for his brothers who had become martyrs and he would join them in paradise."

The jihadists are reported to have repeatedly used suicide bombing as a tactic in the standoff, with a young woman fighting for the YPG having reportedly used the same tactic against them.

The Pentagon said on Wednesday it believed that US-led air strikes had killed "several hundred" IS fighters in and around Kobane, but warned it was still possible that the town could fall to jihadists.

Hemo said that in the end the prisoner was killed by his captors with a shot to the head, although it has not been possible to independently verify the account.

He said that there had been no initial plan to kill the jihadist but concern had grown among the YPG fighters as the extent of his fanaticism became clear.

"He was not scared of death," Hemo said, adding he was shot in the street the day after he was captured.