Large manufacturers moving production back to US from China: survey 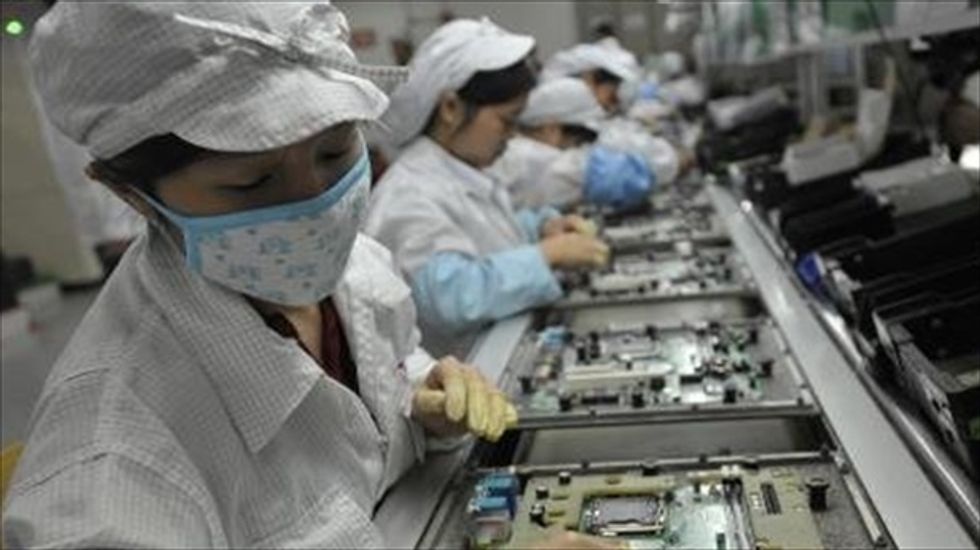 Large manufacturers are increasingly moving production back to the United States from China, according to a new report by The Boston Consulting Group released Thursday.

In the third annual survey of U.S.-based senior executives at manufacturing companies with annual sales of at least $1 billion, the number of respondents who said their companies were currently returning to the U.S. from China increased 20 percent from a year ago.

Given the fact that China's wage costs are expected to grow, do you expect your company will move manufacturing to the United States?" the August survey asked executives at an unspecified number of companies that currently manufacture in China.

The executives who said "Yes, we are already actively doing this" rose to roughly 16 percent in the "Made in America, Again" survey in August from 13 percent a year earlier and seven percent in the first survey in the series, in February 2012.

After watching the U.S. bleed jobs for years as manufacturers off-shored production to China, "now we're watching a switchback," Harold Sirkin, a co-author of the BCG research, told AFP.

The Boston-based global management consulting firm said the online survey was conducted across a wide range of industries, from electronic and computer equipment to transportation machinery, petroleum refining, apparel and food products.

Almost all of the decision makers work for companies that manufacture in the US and overseas and make products for both U.S. and non-U.S. consumption, BCG said, without identifying the companies. The overall survey drew 252 responses.

The number of executives who said their companies would "consider" moving production back to the US from overseas in the near future climbed by about 24 percent.

More than half -- 54 percent -- of the respondents said they were interested in returning production to the U.S., roughly the same percentage as a year ago.

More than 70 percent cited better access to skilled labor as a reason to move production to the US, more than four times as many who cited it for moving production away from the U.S..

For goods that would be sold in the U.S., nearly 80 percent gave shorter supply chains and reduced shipping costs as a motive for returning.

In addition, 71 percent said it was easier to do business in the world's largest economy and about 75 percent said the move provided local control over manufacturing processes and improved quality and yield.

"These findings show that not only does interest in repatriating production to the U.S. and creating American jobs remain strong but also that companies are acting on those intentions," Sirkin said in a statement.

Looking at plans for shifting production in five years, respondents said that an average 47 percent of total production would be in the US, a seven percent increase from last year's responses.

Cutbacks in China were projected to be sharp, down to 11 percent of total production capacity, a decrease of 21 percent from the 2013 survey.

Declines were also predicted for Mexico (-5.0 percent), Western Europe (-19 percent) and the rest of Asia (-22 percent), whereas a 23 percent increase was seen for the rest of the world.

The survey found the United States has topped neighboring Mexico as the most likely destination for new capacity to serve the U.S. market.

Tied roughly even last year, at 26 percent each, this year 27 percent of executives cited the U.S., while 24 percent favored Mexico.

A strong majority of respondents -- 72 percent -- plan to invest in additional automation or advanced manufacturing technologies in the next five years, saying that would allow them to cut costs, boost competitiveness and allow them to benefit from being closer to suppliers and customers.

"The US is strongly positioned to benefit from manufacturers that seek to increase regionalization, especially as automation costs decline," BCG said.

The future looked brighter for employment, too. Fifty percent of the executives expected U.S. manufacturing jobs growth of at least five percent in the next five years, compared with 17 percent who anticipated net job losses.