Latino ex-lawmaker held at gunpoint for honking: Arizona cop wanted 'any reason to shoot us' 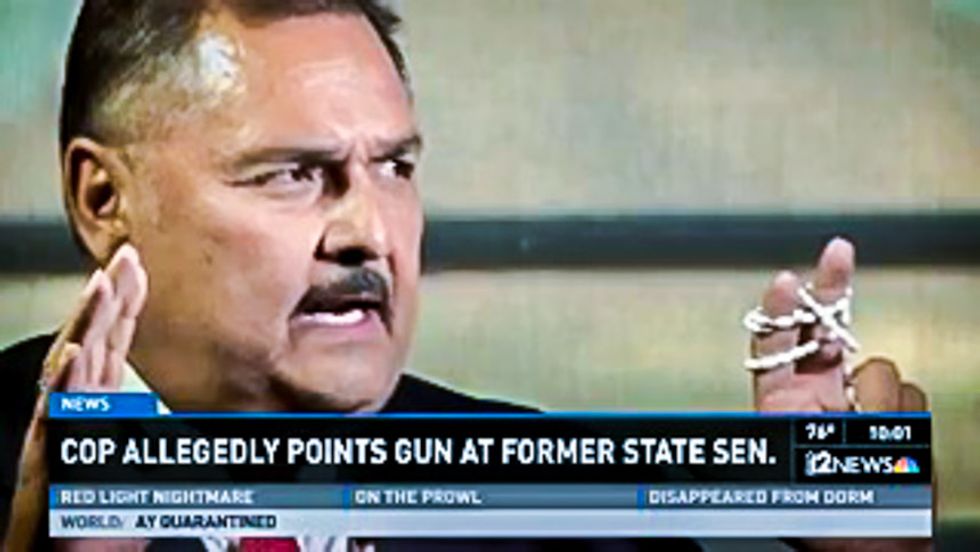 A former Arizona state senator explained this week how a police officer threatened to kill him after he honked at an unmarked van to avoid a traffic accident.

Armando Ruiz told KPNX that he was on his way to church on Monday night with fellow churchgoer Monica Rivera when 51-year-old police officer Jeremy Sweet cut him off in the unmarked van.

Ruiz, who spent nine years in the state House and one year in the state Senate, said that he honked and swerved to avoid a collision, and then Sweet slowed down to about 10 mph, allowing him to pass. That's when the officer tried to "ram" him.

According to Ruiz, the officer eventually pulled around him, and forced him to stop. He then saw Sweet pointing a handgun at them through the passenger-side window of the van.

Rivera said that the only thing that she could remember was that Sweet "put his finger on the trigger."

"And that's why I started crying," she said.

For two minutes, Ruiz said that Sweet trained the handgun at them and never identified himself as an officer.

"I just sat there and put my hands up -- and just angry, he just had that angry look on his face," Ruiz said.

Sweet finally drove off, after telling him to "[b]e careful who you honk at the next time."

Ruiz wrote down the license plate number, and called 911. The officer was later identified as a Phoenix police officer. Sweet was arrested on Tueday, and was being held on one count of aggravated assault.