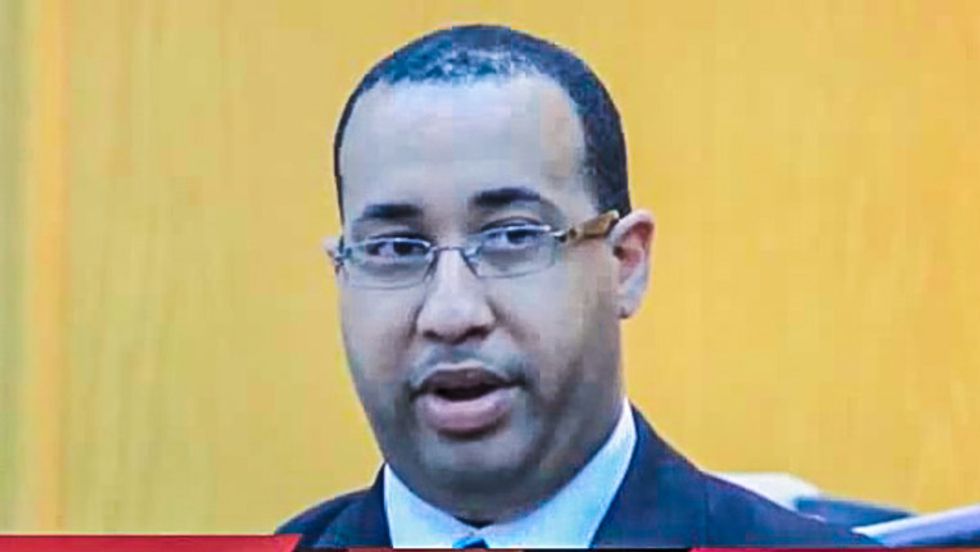 A Tennessee police officer has been accused of stalking and sexually assaulting a rape victim whose case he was supposed to be investigating.

According to court documents filed this week, the woman accuses the city of Chattanooga of negligence in training and supervising Officer Karl Fields.

In the lawsuit, the woman says that Fields asked to meet her at El Meson Restaurante on June 25 to discuss her case, the Chattanooga Times Free Press reported. During the dinner, Fields told her that he was sexually attracted to her, and wanted a relationship.

The lawsuit asserts that Fields pulled the woman into a men's bathroom, forced her up against a wall, and kissed her. The incident triggered a panic attack because the woman had been raped in a bathroom just a month earlier.

After she escaped Fields' advances at the restaurant, she says that he drove her home drunk, and then fondled her legs and breasts. He agreed to go home after telling her that he was too drunk to have sex.

"Were you okay with the things that I did to you last night?" the officer allegedly asked in a text message the next day.

The lawsuit also alleges that Fields often watched the woman through her window, and would text her messages about what she was wearing. Fields reportedly called the woman 73 times in one night alone.

"[The victim] felt sickened and disgusted by Fields' texts, comments and stalking behavior," attorney Stuart James notes in the lawsuit. "But because he was the lead investigator on her case, she was afraid to make him angry for fear he would not use his best efforts to put her perpetrator behind bars."

According to the court documents, Fields said he would often find dates through his sexual assault investigations. In one case, he had sex with the mother of a 14-year-old rape victim. The father in that case had previously told the Times Free Press that Fields had been observed flirting with his ex-wife. The case was never solved.

WTVC reported that Fields was already under investigation by the Chattanooga Police Department and the Tennessee Bureau of Investigation. Fields had been placed on administrative leave pending the outcome of the investigation.

He was also suspended for 14 days without pay in 2006 for driving while drunk.

Attorney Jerry Tidwell, who represents Fields, told WTVC that the lawsuit was premature.

'War is clearly back on the agenda': US says Israel was behind the drone attack on Iran

Unnamed U.S. officials on Sunday confirmed suspicions that Israel was behind the weekend drone attack on a purported military facility in the Iranian city of Isfahan, heightening concerns that the far-right government of Prime Minister Benjamin Netanyahu is gearing up for a broader assault on Iran as international nuclear talks remain at a standstill.

The New York Timesreported that the drone attack—which Iran says it mostly thwarted—was "the work of the Mossad, Israel's premier intelligence agency, according to senior intelligence officials who were familiar with the dialogue between Israel and the United States about the incident."

Lisa Marie Presley was taking opioids and weight loss medication before her death this month, according to a report. The only child of Elvis Presley lost between 40 and 50 pounds over a six-week stretch ahead of the Golden Globe Awards, TMZ reported Monday, citing family sources. Presley, who was 54, reportedly wanted to drop weight before making appearances in support of “Elvis,” a biopic about her father. She also underwent plastic surgery, the sources said. Officials haven’t released Presley’s cause of death, which is being investigated. Presley was open about her past struggles with drug a...