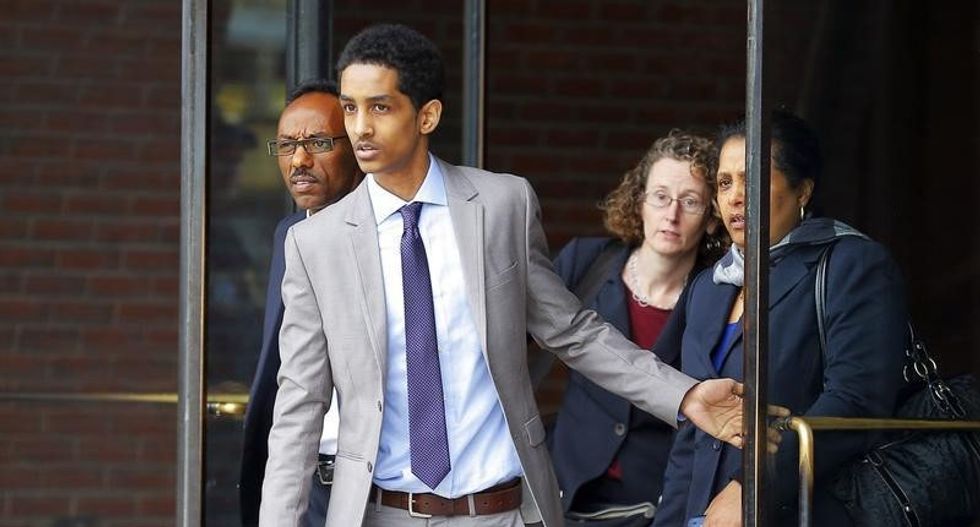 Robel Phillipos (2nd L), a friend of suspected Boston Marathon bomber Dzhokhar Tsarnaev, who is charged with lying to investigators, leaves the federal courthouse after a hearing in his case in Boston, Massachusetts May 13, 2014. REUTERS/Brian Snyder

Attorneys for a friend of the accused Boston Marathon bomber charged with lying to investigators are due back in court on Friday to continue their defense that the 21-year-old man was too high on marijuana to remember his actions.

Robel Phillipos, 21, was so intoxicated the night of April 18, 2013, when he is charged with accompanying two other men to the accused bomber's college dorm room, that he could not remember what he did, his lawyers assert.

They contend that his confession to the FBI days later of going to suspected bomber Dzhokhar Tsarnaev's room with two other friends who removed a backpack containing empty firework shells did not reflect his actual memories of that evening but rather what FBI agents told him happened.

On Thursday, they presented college friends of Phillipos, who testified that he smoked copious amounts of marijuana the night of the alleged visit as well as former Massachusetts Governor Michael Dukakis, a friend of the Phillipos' family, who said the student "was so confused he didn't know what he had said" to the FBI.

Defense attorneys are also expected to call expert witnesses on how marijuana affects the brain.

Federal prosecutors contend that Phillipos, of Cambridge, Massachusetts, and two other friends of accused bomber Dzhokhar Tsarnaev, went to the suspect's dorm room three days after the attack that killed three people and injured more than 260, shortly after the FBI released photos of the suspected bombers.

One of the Kazakhs, Azamat Tazhayakov, was convicted in July of obstruction of justice for taking the backpack. The other, Dias Kadyrbayev, pleaded guilty to obstruction in August.

Phillipos, who faces the less serious charge of lying to investigators, could be sentenced to up to 16 years in prison if convicted.

Tsarnaev, 21, is awaiting trial on charges that carry the death penalty.