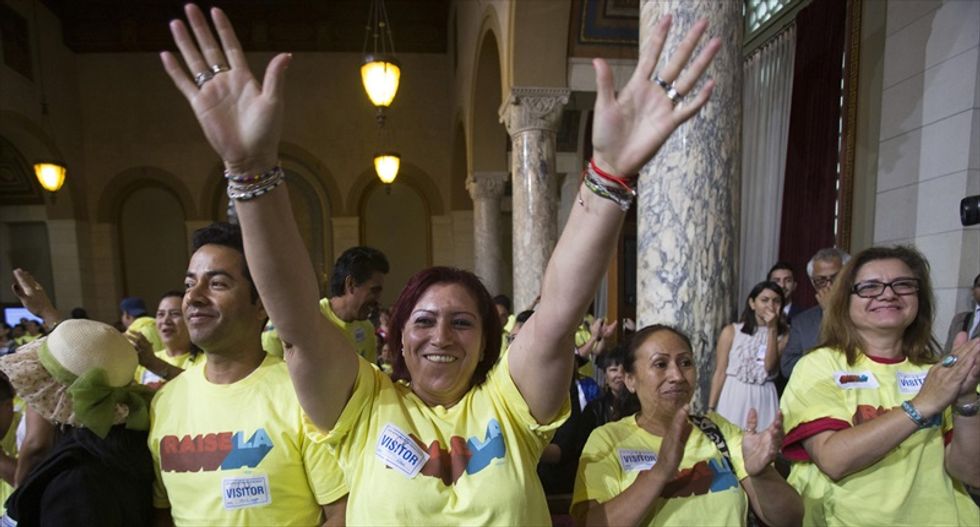 Los Angeles city leaders gave final approval on Wednesday to a measure that would increase the wages of workers at large hotels to $15.37 an hour, prompting a warning from hotel industry officials they might sue over the "living wage ordinance."

Mayor Eric Garcetti, who pledged last month to bring the city's overall minimum wage to $13.25 by 2017, has promised to sign the hotel measure, which would establish one of the highest minimum wages in the country. The current California minimum wage is $8 an hour.

Los Angeles City Council voted 11-2 to pass the measure, a week after giving it initial approval, said Connie Llanos, a spokeswoman for Councilman Curren Price who backs the proposal.

Labor unions and hotel workers have rallied behind the measure to increase pay to $15.37 an hour, which would take effect on July 1, 2015, for hotels with 300 or more rooms and a year later for establishments with at least 150 rooms.

Supporters contend the measure is needed in an industry where workers struggle to make ends meet. But hotel industry officials warned the higher wage floor could lead some hotels to lay off staff and discourage new hotel building.

Katherine Lugar, president and chief executive of the American Hotel and Lodging Association, said in a statement her organization would file a public records request to get details on what motivated passage of the measure and see if there might be "grounds for litigation."

Under the measure, hotels presenting claims of financial hardship could be granted exemptions to prevent layoffs, according to Price's office.

Los Angeles is one of dozens of cities looking to enact or expand so-called living wage ordinances. This week, New York Mayor Bill de Blasio signed an executive order to extend the city's living wage protections, which apply to businesses at sites that receive development funds from the city, in a move that could potentially apply to thousands of additional workers.