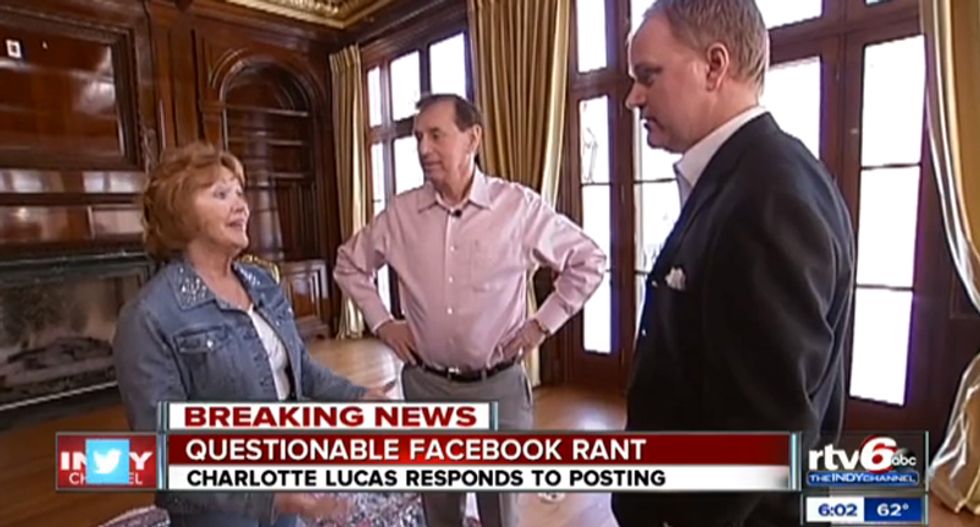 The co-founder of Lucas Oil, a Corona, California-based oil products company with annual revenues in excess of $150 million, took to her Facebook page this week, complaining that she is "sick and tired of minorities running our country."

Charlotte Lucas, who founded Lucas Oil with her husband Forrest Lucas in 1989 and now calls Indianapolis their home, called out atheists and Muslims as the main targets of her ire, reports RTV6.

In a posting on her now-deleted Facebook page Lucas wrote, "I'm sick and tired of minorities running our country! As far as I'm concerned, I don't think that atheists (minority), muslims [sic] (minority) nor any other minority group has the right to tell the majority of the people in the United States what they can and cannot do here. Is everyone so scared that they can't fight back for what is right or wrong with his country?"

Contacted by RTV6 about her comments, Lucas told reporter Rafael Sanchez, that she did write the post and was not interested in discussing it, although she did briefly comment upon it.

"I was very upset when I wrote that," she said. "I will not elaborate other than to say that there are certain people who are trying to make the whole world eat what they want to eat and do what they want to do. I don't think it's any of their business what I put in my mouth. Thank you."

The Lucas family is very well known in the Indianapolis community for their philanthropy, with the family name adorning the stadium where the NFL's Indianapolis Colts play their games.

The Lucas family recently gave RTV6 a tour of their 25,000 square foot mansion.

Watch the video below from RTV6: