Major settlement puts Detroit closer to pulling itself out of bankruptcy 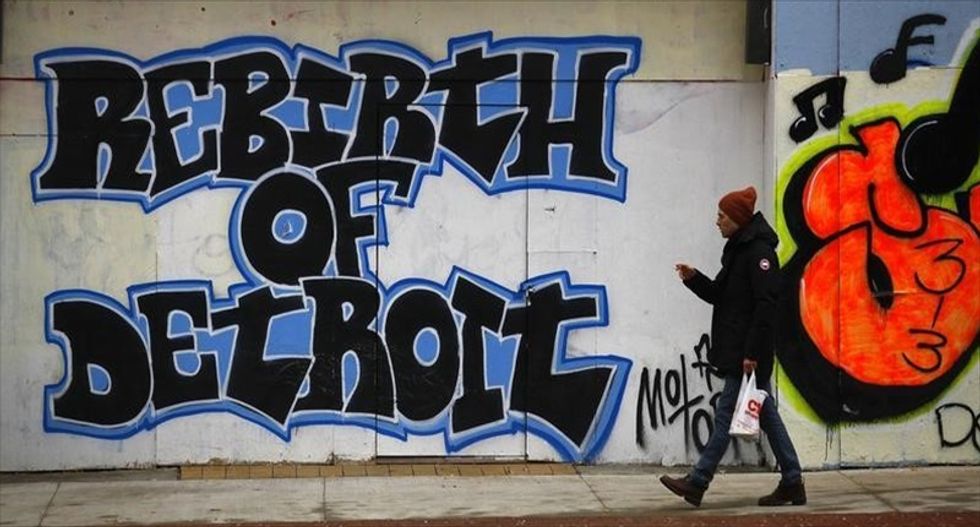 A man walks past graffiti in Detroit, Michigan, on Dec. 3, 2013. Photo by Joshua Lott for Reuters.

The settlement includes an option for FGIC to develop the Joe Louis Arena and parking garage for a mixed-use project, primarily a hotel serving the nearby Cobo convention center, according to Corinne Ball, an attorney at law firm Jones Day which represents Detroit in the case.

The bond insurer will also receive about $152 million in city notes, part of which will be backed by public parking revenue, as well as $19.7 million in credits it can apply for purchasing city parking assets or real estate.

In return, FGIC, which has a $1.1 billion exposure from insuring the pension certificates of participation (COPs), will drop its objections to the city's plan to adjust $18 billion of debt, Ball told U.S. Bankruptcy Court Judge Steven Rhodes.

The 11th-hour deal was reached at 2:30 a.m. EDT on Thursday, following round-the-clock, court-ordered mediation that began more than a week ago and spanned the weekend, according to those who forged the deal.

"The city all along has sought negotiated settlements with its impaired creditors that were not only fair and reasonable given Detroit’s financial situation, but also would allow it to exit bankruptcy solvent and able deliver basic services to its nearly 700,000 residents,” Orr said in a statement on Thursday.

FGIC, one of the final opponents still standing, emerged from its own bankruptcy in April 2013.

As part of the settlement, Detroit will drop a lawsuit seeking to invalidate $1.4 billion of COPs it sold in 2005 and 2006 to lower its two retirement systems' unfunded liabilities.

Closing arguments in the trial on Detroit's restructuring plan are expected next week. Then Rhodes must determine if the plan is fair to creditors and feasible for Detroit to enact.

"A settlement with FGIC, as the last major holdout creditor, certainly provides substantial assistance to the city in obtaining approval of its monumental bankruptcy plan," said John Hutton, an attorney at Greenberg Traurig who is not involved in the case.

"The court must still independently determine that the plan is feasible, and must still find that the city has a reasonable likelihood of achieving its financial projections and performing its obligations," he added.

Another, smaller barrier was also lifted when Detroit on Thursday announced its settlement with the Macomb Interceptor Drainage District over a $26 million claim.

Nonetheless, the FGIC deal does not include seven institutions that hold more than 90 percent of the COPs insured by FGIC.

Those parties will be able to opt in to the deal, but may not, according to Thomas Moers Mayer, a lawyer for the COP holders. He told Rhodes he expects a decision will be made soon.

A key part of the negotiations - where FGIC would accelerate $170 million in COP payments to holders using funds from a third party - was scrapped late on Wednesday.

The third party abruptly pulled out and "yanked the rug out from under everyone," Mayer said.

Mayer and a FGIC spokesman would not identify the third party. Mayer told reporters the unnamed entity has the capability to provide funds and he hopes it will reverse its decision. He added the acceleration would lower the total amount FGIC must pay over time on the debt.

The FGIC deal is similar to the city's settlement last month with Syncora Guarantee Inc, which also guaranteed payments on the COPs. That deal contained a financial component and a real estate transaction, with the financial side netting the company, which has a $400 million exposure, a 13.9 percent recovery.

FGIC's chief executive officer, Timothy Travers, said in a statement that FGIC's recovery is consistent with Detroit's other COP creditors.

"FGIC has always been, and continues to be, believers in Detroit's long-term revival prospects, and this deal gives us the opportunity to participate in and help catalyze that revival," Travers added.