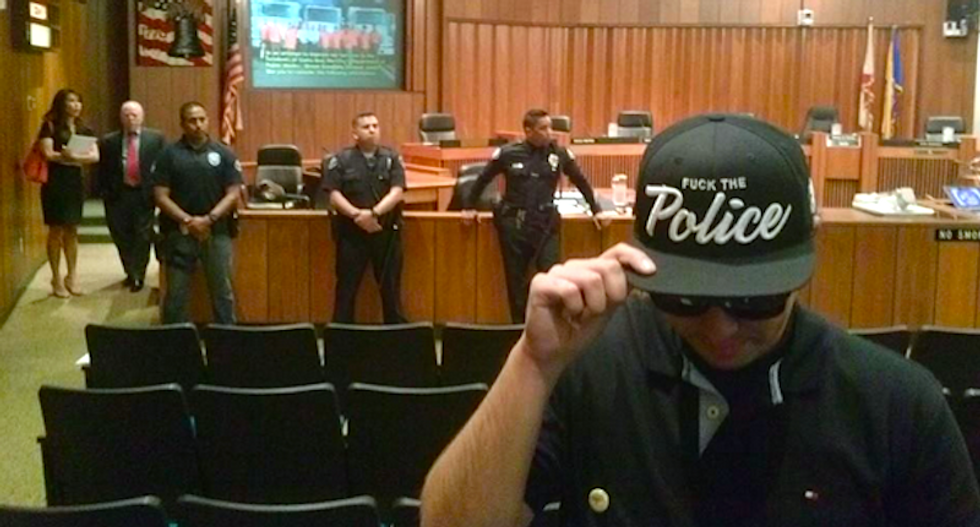 A City Council meeting was called off Tuesday night in southern California after an activist refused to take off his hat reading “F*ck the Police.”

The man, who identified himself only as “Bijan,” is a member of CopWatch Santa Ana – which disrupted a City Council meeting last month over service awards for two officers the activists accused of wrongdoing.

Santa Ana’s mayor, police chief, and city manager looked over at Bijan and asked him to remove his hat, but he refused, said another CopWatch activist.

The black ball cap resembles the snapback Starter hats worn in the 1980s by the rap group NWA, who recorded a song called "F*ck the Police," and uses the same font as their Los Angeles Raiders hats.

Mayor Miguel Pulido angrily asked everyone at the meeting to leave, and he ordered television cameras turned off.

We find the gentleman in the hat offensive," Pulido said.

About 30 police officers came into the council chambers with zip-tie handcuffs, the newspaper reported, after about 20 people defied the mayor’s order and remained inside.

After a half-hour standoff, the demonstrators left and no arrests were made.

The council meeting will be rescheduled, the newspaper reported.

The activists and other community members objected to awards given last month to officers James Berwanger and John Rodriguez, who they accuse of harassing Hispanic residents and CopWatch members.

The mother of Edgar Vargas, whose beating this summer by Santa Ana police officers was captured on video, said “it’s obvious police are working with” U.S. Immigration and Customs Enforcement.

Bijan said he’s glad his hat captured so much attention.

"It's a very small expression of resistance to wear a hat," he said. "The fact that they were willing to go this far over it shows what we already knew. Freedom of speech only exists for certain people."

Another police accountability activist, Michael Burns, was acquitted this week of driving with an obscured license plate in Florida while wearing a "F*ck the police" T-shirt to court.

Watch video of the incident posted online by Poke TV: