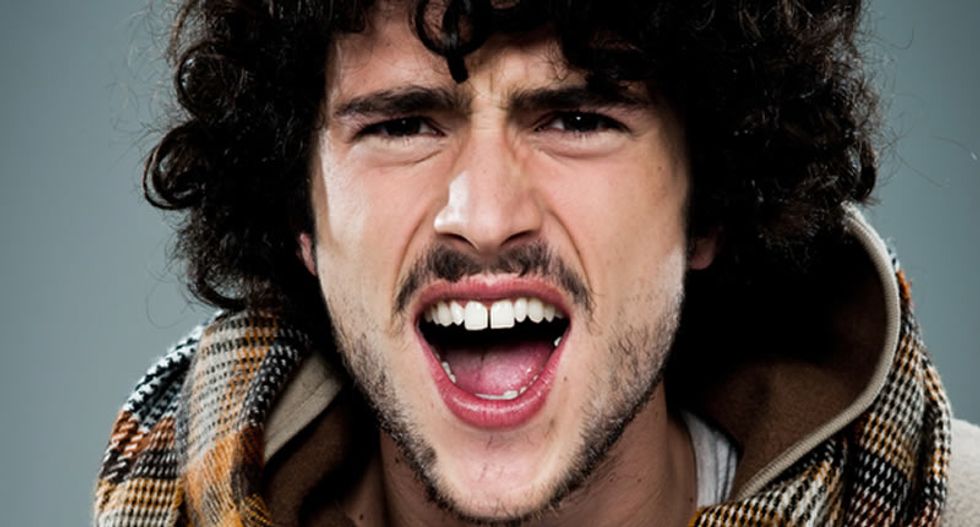 The all-female Portland comedy festival "All Jane No Dick" is being threatened with protests by a men's rights activist who believes the event discriminates against men, LA Weekly's Jennifer Swann reports.

The "All Jane No Dick" festival is meant as a reminder that only 15 percent of touring comedians, and only 5 percent of the most successful, are female. The title of the event is a pun on the Read With Dick and Jane series of children's books. But according to Matt "The Lone Woof" -- as he asked to be called -- the man who posted the Craiglist ad announcing the protest, "there's an ulterior motive" to the pun, "which is the anti-male connotation."

"The fact that it’s all female is sexist," he told Willamette Week's Amy Miller. "Why does it have to be all female? Are there any all-men festivals? If you called it 'All Dick and No Jane,' the feminists would be up in arms."

According to the posters Matt stapled on top of fliers for the event, "all men will have their dicks severed on-site" at the "All Dick Envy but No Dick Man-Bash Festival." When Miller confronted him, "The Lone Woof" turned out to be "a very standard-looking Portland dude, complete with a knit beanie and an accidental beard thing," and though he insisted he was not affiliated with the Men's Rights Movement (MRM), his list of complaints -- as well as the language in which he couched them -- was consistent with theirs.

"This is my first time 'growing a pair' and stepping out to the limelight and expressing what I feel is a growing problem based on somewhat misrepresented facts put out by the feminist propaganda machine," he said, before complaining about a women's meditation tent at a recent state fair. When Miller informed him that it was most likely "based on the real and present physical threat that men pose to women on a regular basis," he replied, "well, there were probably also some men there that got smacked around by their girlfriends. And some drunk guys whose girlfriends had sex with them while they were unconscious, which is still rape."

Claiming that violence and sexual assault against men is un- or under-reported is one of the MRM's most common complaints.

In the Craigslist ad, "The Lone Woof" insists that "[t]his is not a MRA event. I represent no organization or political party. I am simply one human. Standing bravely against a growing sexist paradigm." However, in his interview with Miller, he tells her "[w]hat I really am is I guess you could call me a Men’s Rights Activist," and that he's proud to be "the first outspoken one in Portland, which makes me kind of brave if you think about it."

According to L.A. comedy promoter Samantha Varela, however, "this guy's definitely a confused asshole."