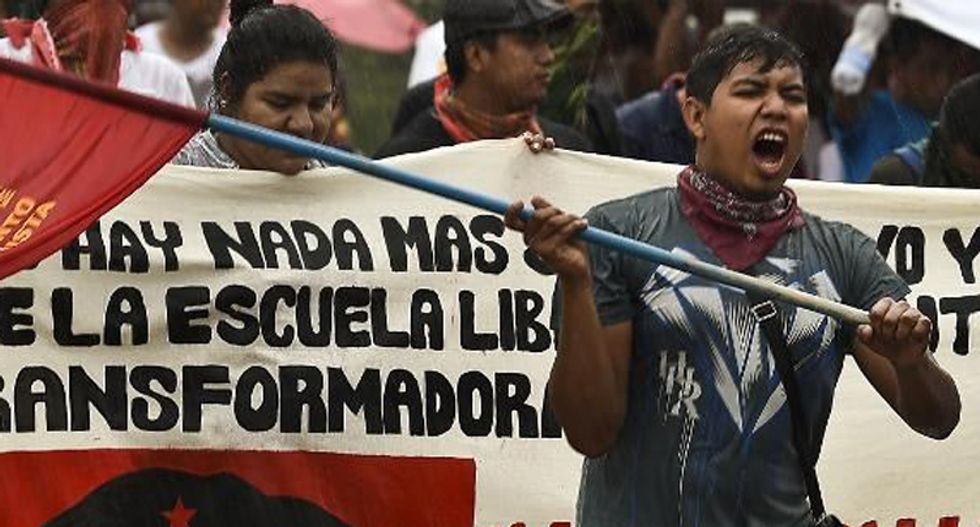 People march in Acapulco, Guerrero state, on October 17, 2014 to demand the safe return of 43 students who went missing in southern Mexico after an attack by gang-linked police last month (AFP)

Mexican authorities announced the arrest of the "maximum leader" of a drug gang accused of colluding with crooked police in the disappearance of 43 college students.

Attorney General Jesus Murillo Karam said the arrest of Guerreros Unidos kingpin Sidronio Casarrubias would open a "new line of investigation that can quickly and more easily get us closer to the truth" in the case.

The announcement came hours after thousands of protesters marched in Acapulco to demand the safe return of the 43 young men, who went missing in the southern state of Guerrero three weeks ago.

Tomas Zeron, director of investigations in the prosecutor's office, said the "maximum leader" of the Guerrero-based gang was arrested Thursday at a police checkpoint on a highway between Mexico City and the nearby city of Toluca.

The announcement came three days after authorities said another Guerreros Unidos leader, Benjamin Mondragon, killed himself when federal police surrounded him in the central state of Morelos.

Authorities say the gang worked hand-in-hand with corrupt municipal officers in a night of violence in the city of Iguala on September 26 that left six people dead and the 43 aspiring teachers missing.

Iguala's officers shot at the students' buses and then handed them to their counterparts in the neighboring town of Cocula, who delivered the 43 young men to the Guerreros Unidos, according to authorities.

Casarrubias denied ordering the attack on the students but was informed when it happened and did nothing to stop it, Murillo Karam said.

A total of 36 municipal officers have been arrested in the case, along with 17 Guerreros Unidos members and their boss, he said.

The attorney general said investigators are still analyzing the contents of three mass graves found near Iguala after declaring last week that 28 bodies in one pit did not belong to the students.

More than 1,200 security forces are looking for the college students around Iguala.

The mass disappearance has sparked international and national outrage, with protests held across Mexico last week and a new demonstration in the Pacific resort city of Acapulco on Friday.

Chanting "they took them alive, we want them back alive," thousands of students, teachers and machete-wielding farmers also called for the resignation of Guerrero Governor Angel Aguirre over his handling of the case.

"We are angry because this is not an isolated event. Many of us are parents and we see very ugly things in this country that we want to fight," said Magdalena Catalan, a 34-year-old teacher.

Many of the enraged protesters wore masks in the latest demonstration over the mass disappearance.

"We are enraged against the government. It's going to be a month (since the disappearance) and we have seen nothing," said a farmer gripping a machete.

The US embassy issued an "emergency message" urging its citizens to stay away from the demonstration.

But the protest was peaceful, unlike a demonstration in Guerrero's capital on Monday that ended with students torching part of the state government's headquarters.

The protesters have threatened to seize all 81 municipal offices in Guerrero to pressure authorities to find the students. They took over a fifth town hall on Friday while Acapulco's government closed its offices as a precaution.

Aircraft, horse-mounted police and divers have been looking for the 43 missing in several towns around Iguala, 200 kilometers (125 miles) south of Mexico City.

Meanwhile, Guerrero's state congress impeached the fugitive mayor of Iguala, Jose Luis Abarca, who is being sought by authorities on organized crime charges along with his police chief.

Aguirre says one theory behind the students' disappearance is that Abarca ordered Iguala's police force to attack the students over fears they would disrupt a speech by his wife.

“People weren't questioning the (election) process before, but there was a huge disinformation campaign which really destabilized many segments of American society," Raffensperger said during the panel, referring to his party's conduct in reaction to 2020. “I think the challenge that we have as Republicans is that right now our party is really fractured."