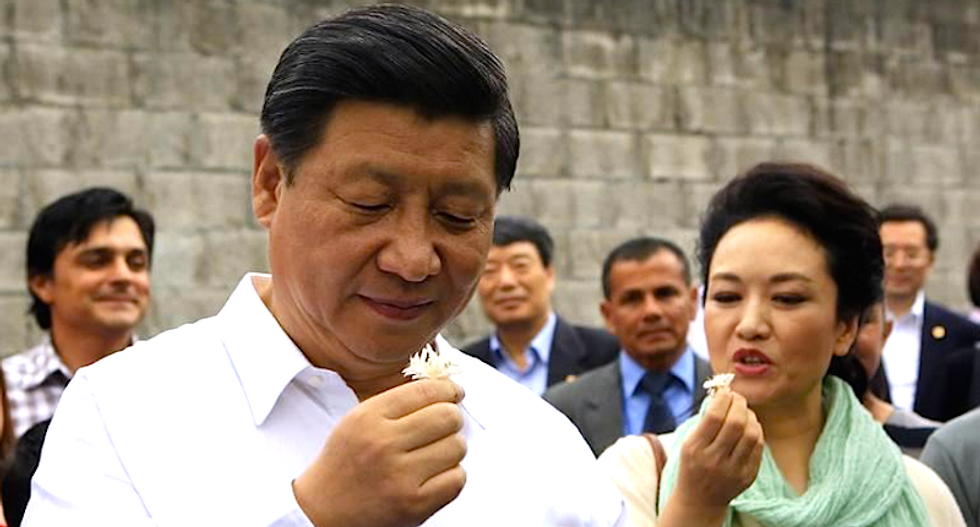 A Chinese army singer who mysteriously disappeared from public view six years ago has made a surprising reappearance in local media -- as the wife of the President Xi Jinping's brother.

In a rare glimpse into the life of the Xi family, a newspaper in the southern city of Shenzhen quoted the Communist leader's younger brother Xi Yuanping describing his marriage to singer Zhang Lanlan.

Zhang was a mainstay on glitzy Chinese TV shows for years, but reportedly made no further appearances after singing in China's annual official new year gala in 2008.

The report, which was quickly deleted from Chinese websites, quoted Xi Yuanping, 58, as saying that he had married the 34-year old Zhang -- nicknamed the "military's top beautiful woman" -- the same year.

"Lanlan is a simple and sincere woman," the report -- which showed the two seated together -- quoted Xi as saying.

Xi Jinping similarly married military singer Peng Liyuan, who was herself for many years a mainstay of the new year gala -- the most watched television show in the world.

China's leaders are highly secretive and tightly restrict any reports about their private lives in local media.

Since her disappearance, Zhang, who also acted in several TV dramas as one of tens of thousands of entertainers who are also members of China's People's Liberation Army (PLA), has been subject to lurid rumors, some involving other senior Communists.

The PLA has since its inception maintained its own entertainment troupes, who sometimes become wives and mistresses for officials of the ruling party -- former President Jiang Zemin has long been rumored to have conducted an affair with PLA entertainer Song Zuying.

Former deputy navy commander Wang Shouye spent 12 million yuan on five mistresses, all of whom were army performers, before being handed a suspended death penalty in 2006, state-run media reported.

Xi's relatives have amassed hundreds of millions of dollars in assets, the US news agency Bloomberg reported in 2012, angering the Chinese government which blocked the agency's website.