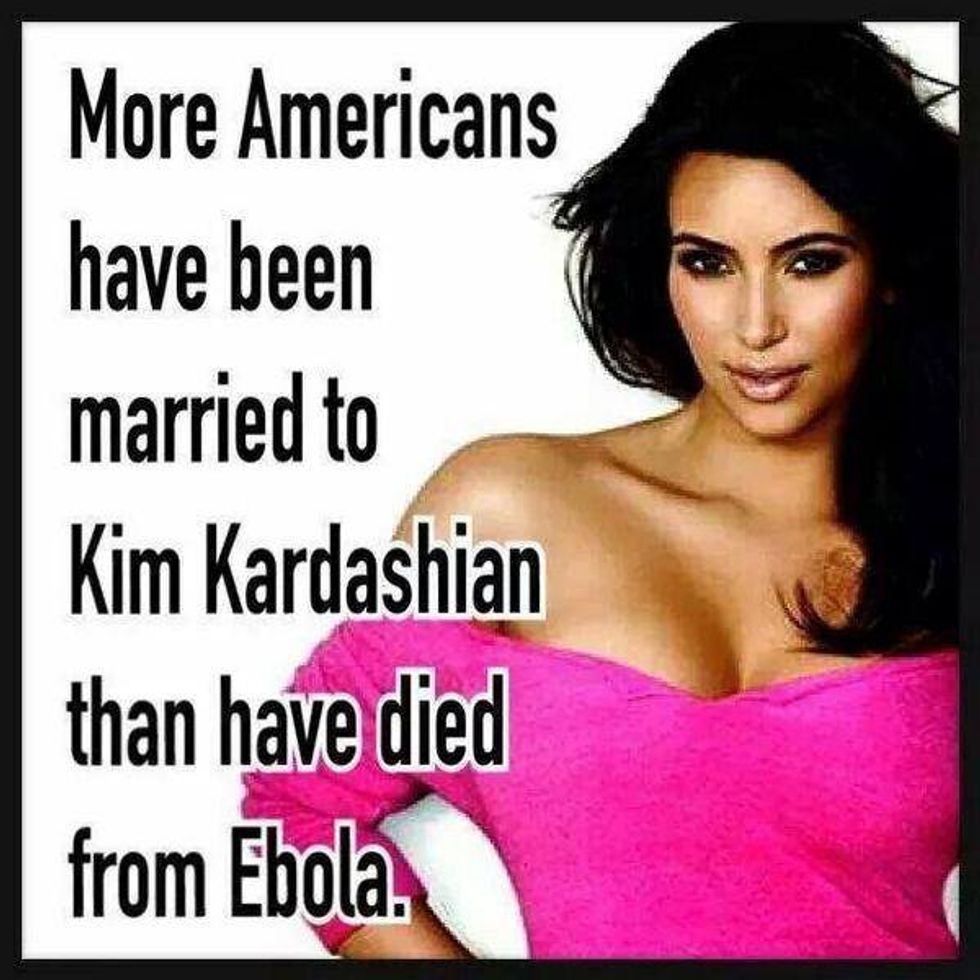 This meme, which points out that three Americans have been married to Kim Kardashian and only American has died of the virus helps put the Ebola hysteria into perspective.

But the point isn't to trivialize Ebola. The point is that, as per usual, politicians and the media is distorting reality, manipulating people's fears and ignoring the important stories and lessons that could-- and should-- come out of the Ebola tragedy.

The Ebola virus has highlighted the dangers of neo-liberal policies, which destroy public infrastructure, and a myopic privatized health care system in which saving lives is less important that making huge profit. It has revealed the way the death of Africans is acceptable while the death of Americans and Europeans, especially white ones, is not. As Dr. Atul Gawande explained on Democracy Now! it was only when the disease traveled from Africa to the U.S. that people started paying attention:

Starting at March 31st, Doctors Without Borders said the hospitals in Guinea and in Liberia are overwhelmed, and they were crying for help. As late as September 2nd, they were telling the U.N. and others that the help being provided is a shambles, that this is a disease that is doubling in the number of cases every three weeks. And our response was pathetic.

It might have been the best thing that has happened that the first case to leave the African continent came to America, because it brought our mobilization to realize what happens there matters to us here. And suddenly, we are now mobilizing thousands of people to go. The CDC has mounted the largest global operation for public health in U.S. government history.

It shows us that we live in a world where epidemics are manipulated for political gain, to make far-fetched racist and outlandish claims about Obama's alleged loyalty to Africa over America  and used to further racist and totally incoherent and illogical claims about Mexican Immigrants bringing Ebola into the country.  Be xenophobic and racist. Go ahead. But at least make your racist and xenophobic lies have an air credibility.

And it shows us we live in a world where, sometimes, comedy and memes do a better job informing us than the traditional media. See, for example, this tweet by Emm Kay: 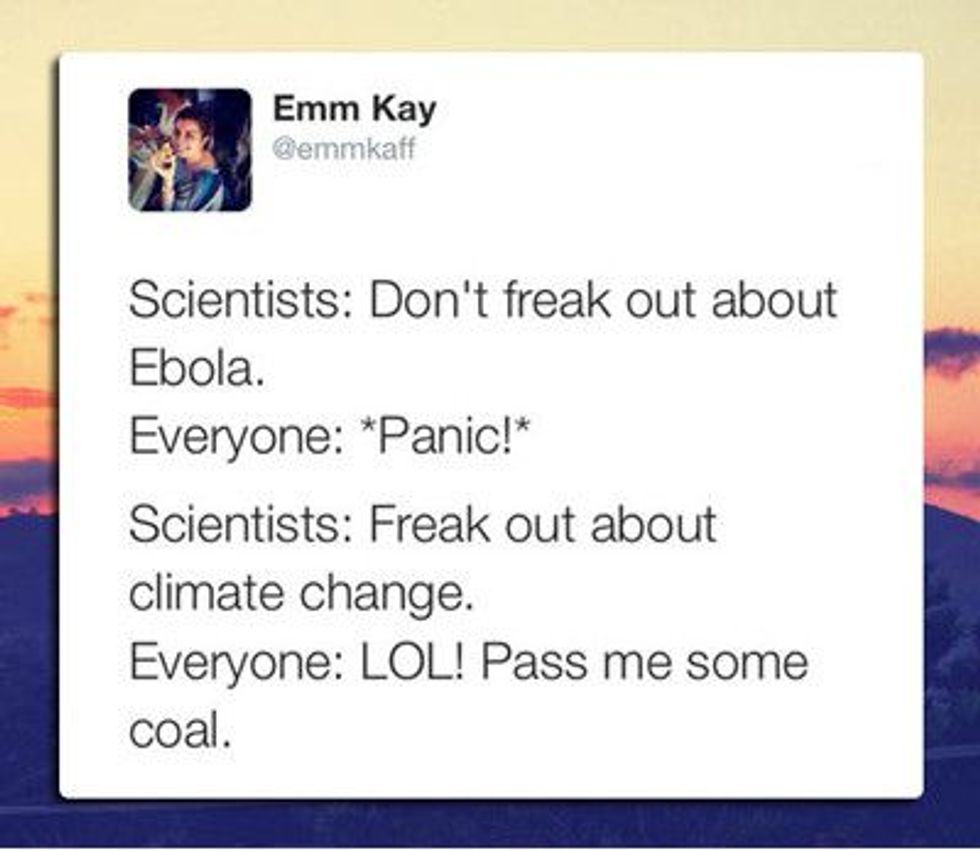 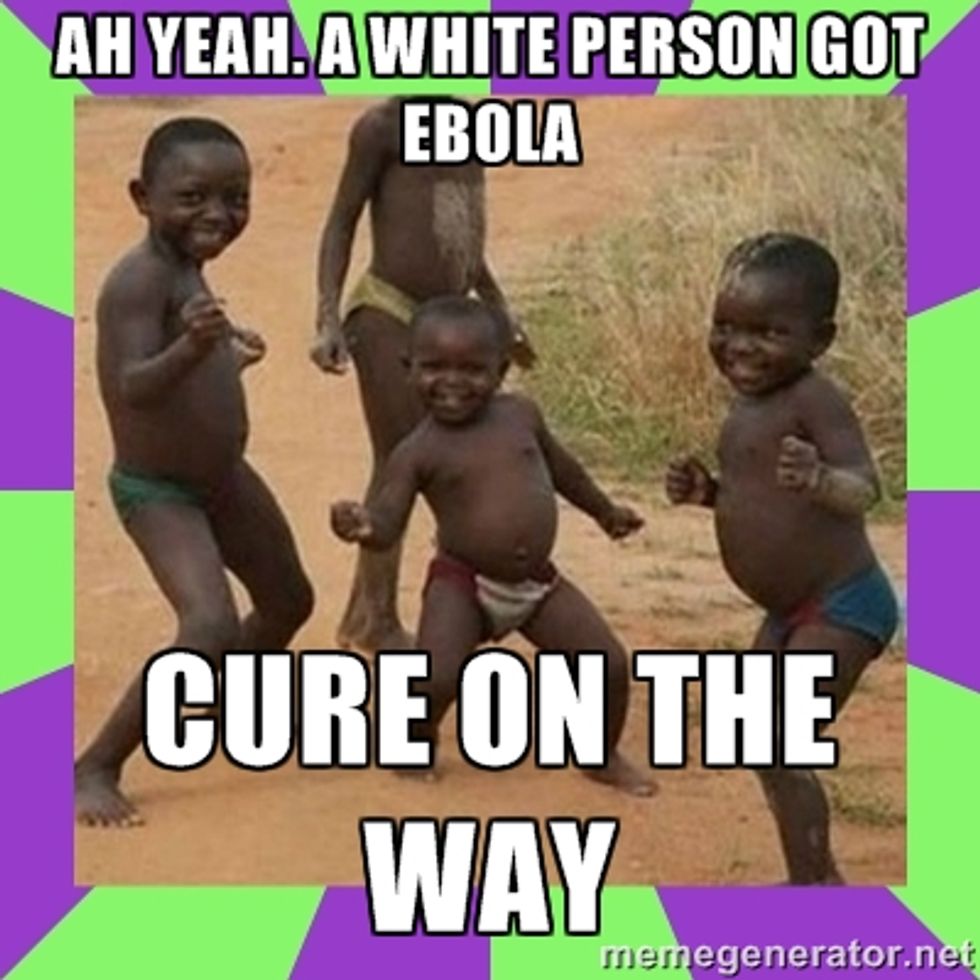 And The Onion, which, as usual, captured the tragedy with a humorous headline: Experts: Ebola Vaccine At Least 50 White People Away.

Even Trump supporters are tired of hearing him whine about being wronged all the time: NYT reporter

New York Times reporter Jeremy Peters spoke to MSNBC on Monday about his recent report that the Fox network and Rupert Murdoch outlets are pushing Donald Trump away.

Quoting the piece Nicolle Wallace on "Deadline White House" noted that Trump hasn't been interviewed on the network for 100 days.

'Pathological liar': Aides say they have 'zero trust' in Herschel Walker prior to Fox News interview

Georgia Republican Senate candidate Herschel Walker attempted to explain some of the scandals surrounding his campaign in a pre-recorded interview with Fox News’ Brian Kilmeade.

Among the topics discussed were his repeated declines to debate his Democratic opponent Senator Raphael Warnock, his refusal to publicly claim several of his children, confusion on his employment status with the FBI, and controversy surrounding his recent comments on China.

Jon Stewart was caught on video getting visibly angry this Monday at a known conspiracy theorist and right-wing activist over the veteran bill he's fighting to get passed.

Jack Posobiec, who helped popularize a conspiracy theory claiming Hillary Clinton was running a child sex trafficking ring out a pizza parlor and who pushed unfounded claims about the murder of former DNC staffer Seth Rich, showed up outside Capitol Hill as Stewart was promoting his lobbying efforts.