Most expensive Senate race down to the wire in North Carolina 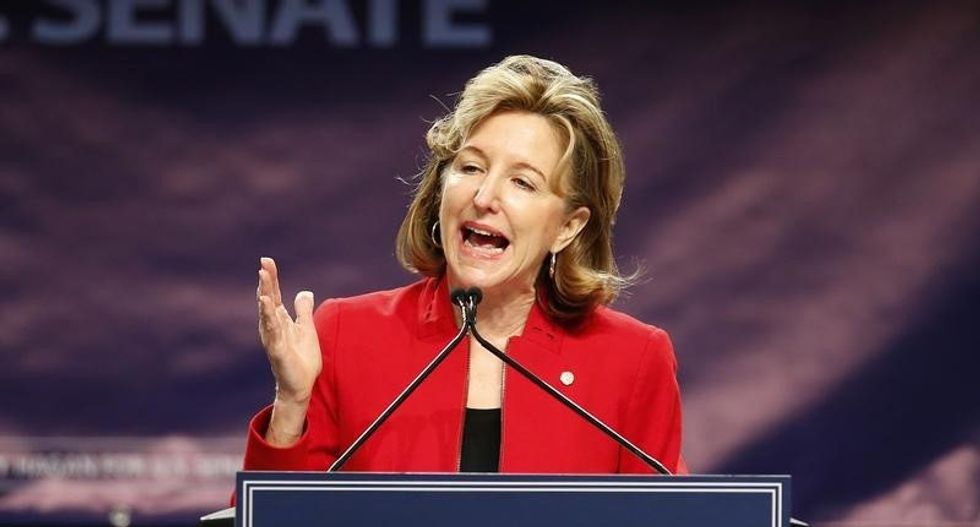 The costliest U.S. Senate race in history is drawing political heavyweights like Mitt Romney and the Clintons to North Carolina as Republicans and Democrats scramble to pull out a win in the battleground state.

Democratic incumbent Kay Hagan's lead has faded in the final stretch before the Nov. 4 vote. The latest polls show her tied or with a slight edge over Republican challenger Thom Tillis in a contest that will help decide which party controls the Senate.

Spending in the closely fought battle has surpassed $100 million, according to the nonpartisan Sunlight Foundation, with more than two-thirds of the money provided by outside groups.

Hagan's campaign said this week it was encouraged by early voting data that showed higher turnout for Democrats than Republicans. African Americans, who tend to vote Democratic, also are turning out in higher numbers than at the same point in 2010.

Hagan will try to build on that momentum on Friday at an early vote event with former U.S. President Bill Clinton in Raleigh. She appeared with former Secretary of State Hillary Clinton last weekend.

Tillis, speaker of the North Carolina House, enlisted 2012 Republican presidential nominee Romney to rally voters with him on Wednesday, a day after U.S. Senators John McCain and Lindsey Graham joined him on the trail.

"Thom Tillis is going to be the guy that makes a Republican majority in the U.S. Senate," Romney told voters in Raleigh.

The heavy spending has resulted in a barrage of at least 101,800 TV ads about the race, according to the Center for Public Integrity. Georgia's close Senate race had the next- highest number in the country, with at least 65,000 TV ads.

Hagan, who beat Republican Elizabeth Dole in 2008 to win the seat, said in an ad this week that Tillis had pursued a conservative agenda in the state legislature that hurt the middle class, women and public education.

"There's a huge contrast between me standing forward for North Carolinians first on every issue and Speaker Tillis doing the business of his special interest friends," Hagan said at a campaign stop in Greensboro, where she emphasized her focus on equal pay and healthcare access for women.

Tillis has portrayed Hagan as being in lock step with President Barack Obama, who won North Carolina in the 2008 election but lost the state to Romney in 2012. He criticized her for slow action against Islamic State insurgents and not taking national security threats seriously.

“We need to get this country back on track, and our safety and security is one of the first things we need to focus on,” he told military members in Goldsboro this month.

As of Thursday, registered Democrats had cast nearly 49 percent of the accepted in-person early ballots in North Carolina, compared with 31 percent by Republicans and about 20 percent for unaffiliated and Libertarian voters.

The effect unaffiliated voters will have on the Senate race "is the great unknown right now," Bitzer said.

The Tillis campaign said it was confident its aggressive voter outreach efforts would send him to the Senate.

"Thom has the momentum in this race," said Tillis spokeswoman Meghan Burris.