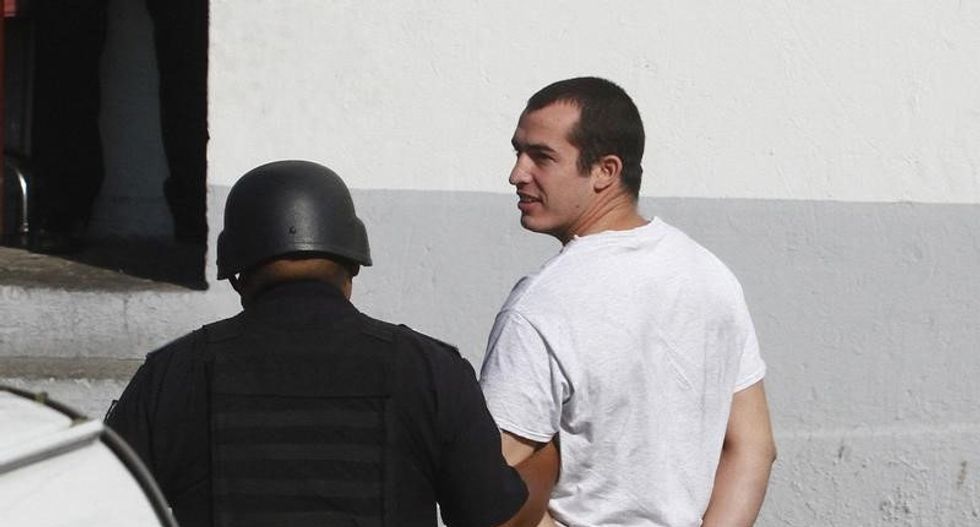 The mother of a U.S. Marine held for six months in a Mexican prison appealed on Wednesday for the U.S. government to do more to free her son, who told her his guards threatened him with rape, torture and execution.

Andrew Tahmooressi, 26, was arrested on March 31 by Mexican customs agents who found three guns in his pick-up truck at a border crossing between San Diego and Tijuana. He was charged with weapons offenses and has been imprisoned in Mexico ever since.

His case has drawn the attention of U.S. lawmakers, who took the unusual step of scheduling a House of Representatives hearing during a congressional recess in the hope of putting pressure on Mexico and on President Barack Obama's administration to intervene more urgently in the case.

"My son is despondent, without treatment, and he needs to be home," his mother, Jill Tahmooressi, said at the hearing.

She said her son told her the Mexican guards had threatened to rape, torture and execute him to obtain her personal information. And he had urged her to "go underground," cancelling her bank accounts and not come to Mexico, fearing that she would be killed.

Mexican authorities deny that Tahmooressi has been mistreated.

Supporters say Tahmooressi, who is now in the reserves, suffers from post-traumatic stress disorder stemming from his military service. They said he entered Mexico accidentally at a poorly marked border crossing after deciding to move to San Diego to obtain treatment for his PTSD.

Mexican authorities have said Tahmooressi did not cross the border by accident and did not declare the weapons when he arrived.

Although both Democratic and Republican lawmakers at the hearing voiced strong support for the Marine, the hearing occasionally turned sharply political. Some Republicans leveled sharp attacks against the Democratic president.

"I am mystified that President Obama couldn't find time between negotiating with terrorists to call our ally, the Mexican president, to appeal to him on behalf of our Marine," said Arizona Republican Representative Matt Salmon, who called the subcommittee hearing and has visited Tahmooressi in prison.

U.S. State Department officials say they care "deeply" about Tahmooressi's case and are in close touch with Mexican authorities, but that every country has its own judicial process.