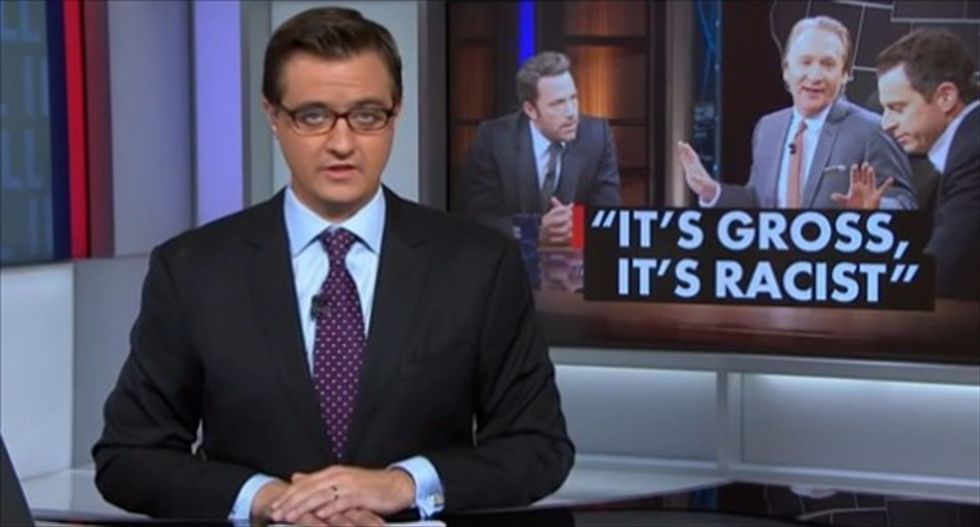 MSNBC host Chris Hayes called out comedian Bill Maher on Monday for not discussing his criticisms of Islam with actual Muslims.

Hayes declared himself to be in the "Ben Affleck camp" after playing footage of Affleck's argument with the Real Time host this past Friday, during which Affleck called Maher's criticisms about the religion to be "gross" and "racist" for seemingly lumping all Muslims in with terrorists.

Maher continued to defend his position in an interview published by Salon on Monday, saying he and author Sam Harris were "trying to stand up for the principles of liberalism" during their clash with Affleck.

But Hayes rejected that reasoning, saying Maher was being "gross and racist," because he was obsessing over a metaphorical "problem with Islam."

"What's also a bit gross is that these are five non-Muslim guys sitting around talking about what 'the Muslims' think," Hayes pointed out. "From that standpoint, it's just a very weird conversation to have."

A more accurate example of discussions involving Islam, Hayes argued, was Reza Aslan's CNN interview denouncing Maher's point of view as "not very sophisticated." Maher has yet to respond to Aslan's statements ripping him for "facile" attacks against the religion.

Watch Hayes' commentary, as posted online on Monday, below.