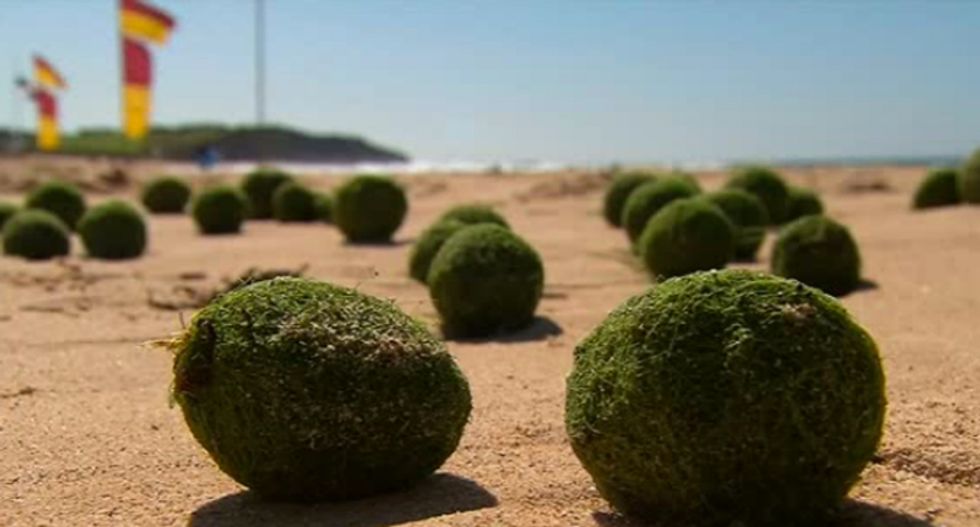 Beachgoers at Dee Why Beach near Sydney Australia have been encountering something since early September that is rarely seen on their shores: balls made up of living green algae, reports The Telegraph.

According to Associate Professor Alistair Poore of the School of Biological, Earth and Environmental Sciences at the University of NSW, the balls are probably a rare type of living green algae, shaped by the movement of the waves before being deposited on the shore.

"I’ve seen similar things - sometimes dead sea grass can roll around and form balls like underwater tumbleweeds but that’s made of dead material and these look to be living," Poore explained. "It is a habit known as 'aegagropilious,' where the algae is free living (not on rocks) and forms into spherical balls. They’re pretty interesting."

According to one beachgoer, “I didn’t want to touch one because you never know what can sting you on the beach, but I did poke it with my toes and it’s squishy, like a sponge. They look like alien eggs or something.”

The green balls, which float upon the surface beneath the sun, range in diameter from about the size of an egg to tennis ball-sized.

A spokeswoman for the Warringah Council said that lifeguards discovered the balls on the beach Thursday.

“They’re pretty excited because they are so rare,” she said. “They have caused great interest from UFO watchers.”

Watch the video below from The Telegraph: