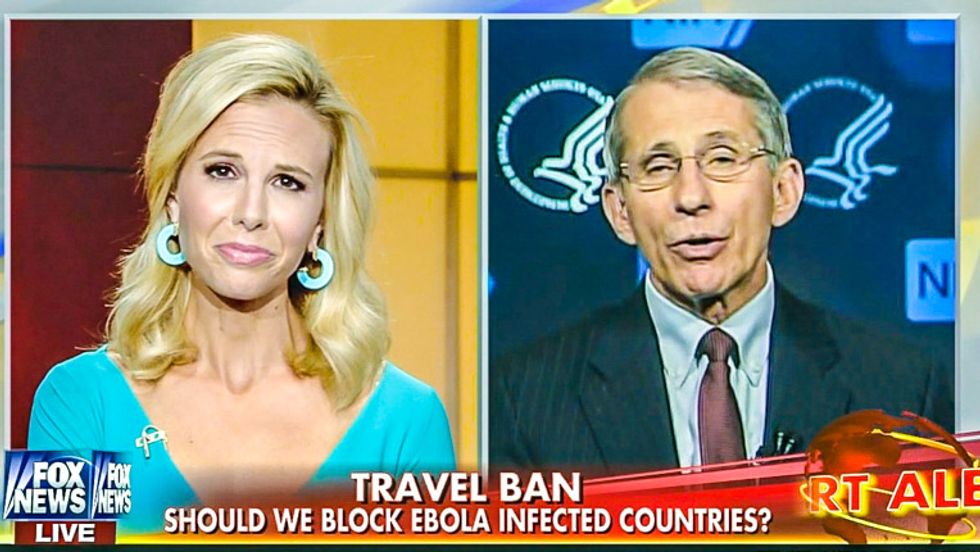 Fox News host Elisabeth Hasselbeck on Monday asked Dr. Anthony Fauci, Director of the National Institiute of Allergies and Infectious Diseases at the National Institutes of Health, why he was not recommending a "closing of our borders" in response to an Ebola outbreak in west Africa.

On Monday's edition of Fox & Friends, Hasselbeck pointed out that a freelance NBC cameraman was being allowed to return to the U.S. after being infected with Ebola. And a man in Dallas who traveled from the Liberia to the U.S. was also fighting for his life.

"Why are we still letting people into the country who could have possibly been exposed?" she asked. "Why not just shut down the flights and secure the borders? Many of you want to know... Why not, just as a precaution until we get things under control, seal off the border temporarily?"

Fauci said that he understood why people might jump to the conclusion that a travel ban might help, but he said that Hasselbeck's suggestion "didn't make any sense" because preventing countries from getting aid could make the epidemic worse.

"And if we completely isolate them -- don't let anything in, don't let anything out -- we know from experience with public health, that marginalizes them," he explained. "And you could have civil unrest, governments could fall. And then you wind up having spread the virus to other countries in west Africa, which would only compound the problem."

Hasselbeck wanted to know if the government had considered something "less extreme."

"Perhaps flights that were approved to go for treatment, for aid, for supplies to the area, but any other flights would have to go through an approval process into a limited flight travel plan," Hasselbeck replied. "Not a complete closing. I don't think anyone who has a heart wants some -- a group of people to just suffer alone in the world, and there are those that want to go and help, and my heart is with them."

"But what about a partial ban, a closing of our borders?" she asked.

"A closing of our borders? I'm sorry, I don't know what you mean by that," Fauci said.

"Flights that are specific to helping the situation as you just deemed important, which many Americans would agree with you, sir," Hasselbeck insisted. "But what about any other flights, just restricted."

Fauci observed that the media had created a misperception that west Africa was mostly people sick with Ebola.

"You have Americans there, you have business people there, people of dual citizenship who have to go back and forth," he said. "It's completely impractical. In fact, from a public health standpoint, not helpful to do that. And I think every public health official feels that way."