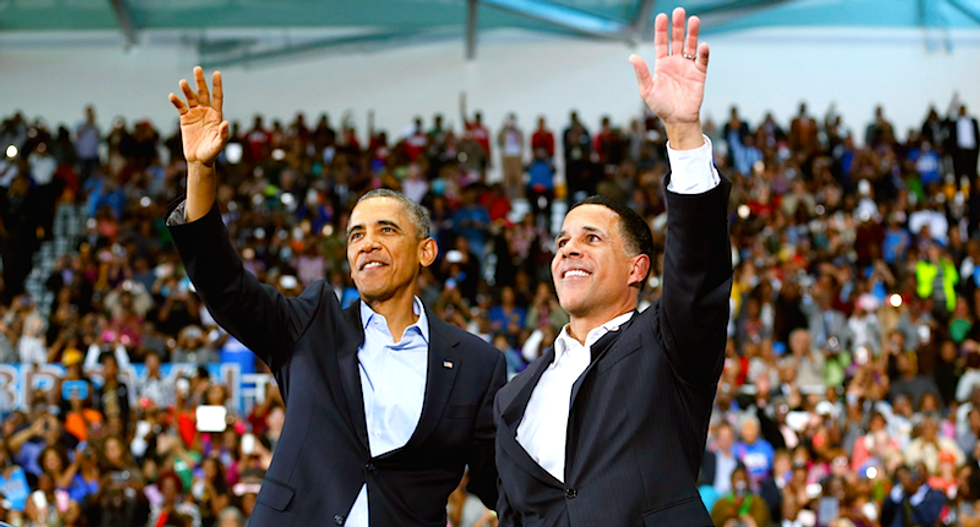 President Barack Obama made a rare appearance on the campaign trail on Sunday with a rally to support the Democratic candidate for governor in Maryland, though the event was marred somewhat by early departures of crowd members and a yelling heckler.

With approval levels hovering around record lows, Obama has spent most of his campaign-related efforts this year raising money for struggling Democrats, who risk losing control of the U.S. Senate in the Nov. 4 midterm election.

Many candidates from his party have been wary of appearing with him during their election races because of his sagging popularity.

"You've got to vote," Obama repeated over and over at a rally for Brown in Upper Marlboro, Maryland, near Washington.

Democrats have a history of not turning up to vote in midterm elections.

"There are no excuses. The future is up to us," Obama said.

Some 8,000 people turned out for the event, held in a noisy school gymnasium. But a steady stream of people walked out while he spoke, and a heckler interrupted his remarks.

Obama's help, or lack thereof, may not matter much to Brown, who is 11 points ahead of Republican opponent Larry Hogan, according to an average of polls by RealClearPolitics.

Quinn's race is tighter. He is ahead of Republican Bruce Rauner by 1.8 points, according to the RealClearPolitics average.

The governor, echoing the president at other Democratic events, encouraged the crowd at Chicago State University to get to the polls.

Obama picked out people from the crowd whom he knew, and seemed to relish being back in Illinois.

"It's good to be home," Obama said. "I care about what happens here," he said to applause.

Obama said he planned to cast his vote early on Monday. He is scheduled to spend the night at his Chicago home.