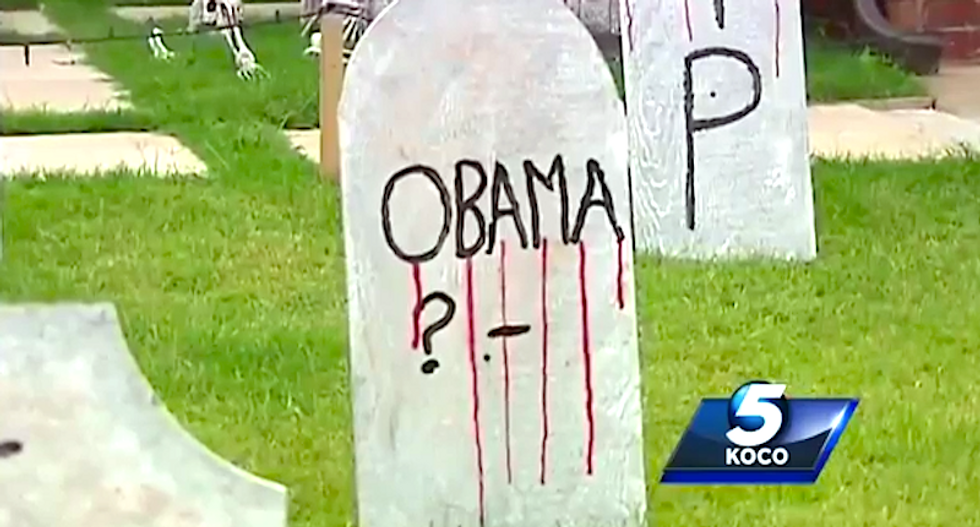 An Oklahoma woman said she was “absolutely offended” by her neighbor’s Halloween display, which included a tombstone with President Barack Obama’s name on it.

“He is the president of the United States, and it actually is about respect," said Jamila Phillips, who recently moved to the neighborhood in Edmond. "It’s a total respect thing because this person is still alive.”

Her neighbor, Dwayne Dockens, told KOCO-TV he’s displayed the tombstone with Obama’s name for the last three years without complaint.

“We made them a few years ago back when it was a big deal, questions up about his birth certificate," Dockens said. "And we made all these ourselves, so just thought it was kind of humorous and, you know, went ahead and put him in there, as well.”

The wooden tombstone reads "Obama ? – " and is placed among others reading “Imma goner” and “I told you I was sick.”

The display also includes skulls, bones, and a plywood coffin.

Dockens said he’s sorry his new neighbor took his display the wrong way, but he plans to keep all the tombstones.

“I certainly didn’t mean to offend anybody or cause any problems,” he said. “Don’t know that I would take it down.”