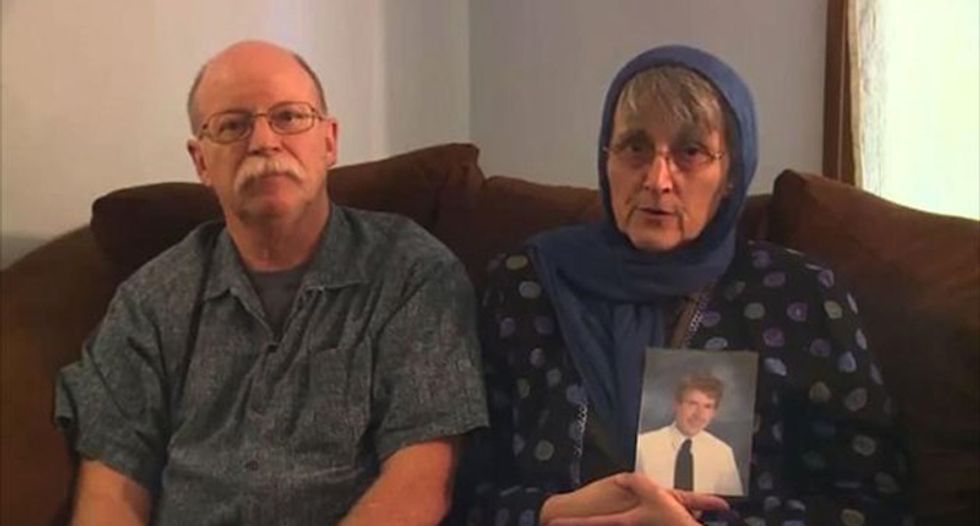 Ed and Paula Kassig, hold a picture of their son, Peter Kassig, who is being held by the Islamic State. They released a video pleading for his life (AFP)

The parents of an American aid worker held hostage by Islamic State jihadists issued a video plea for their son's release on Saturday, urging his captors to show mercy.

In a three-minute video posted on Youtube, parents Ed and Paula Kassig said their son Peter had dedicated his life to helping innocent victims of the Syrian conflict.

The 26-year-old former US soldier was paraded at the end of an IS group video released on Friday which showed the murder of British aid worker Alan Henning.

Hostages threatened at the end of four previous, near-identical IS beheading videos have subsequently been murdered.

"We implore his captors to show mercy and use their power to let our son go," Ed Kassig said, referring to his son by his adopted Islamic name of Abdul Rahman.

Ed Kassig revealed in the video that his son had disappeared in Syria on October 1 last year. He had embraced Islam after forming a deep attachment to the people of the strife-torn region, Ed Kassig said.

"When he saw the suffering of the Syrian people he went to Turkey and founded an organization to provide aid and assistance," Kassig said in the video.

"He helped train 150 civilians in skills needed to provide medical aid to the people of Syria. His organization gave food, cooking supplies, clothing and medicine to those in need. He grew to love and admire the Syrian people and felt at home there. Our son's journey culminated in him embracing Islam.

"Sadly, he was taken captive and is not free to continue his life's work serving the people of the region."

Kassig said while he had appealed to the US government, he was powerless to influence its actions.

"There is so much that is beyond our control," he said.

"We've asked our government to change its actions but like our son we have no more control over the US government than you have over the breaking of dawn."

Paula Kassig, wearing a headscarf, revealed that she and her husband had received messages from their son during his captivity following his disappearance last year.

"Dear son we hope you will see this message from me and your father. We are so very proud of you and the work you have done to bring humanitarian aid to the Syrian people," she said.

She revealed that in their son's messages, Peter Kassig had expressed concern for a colleague who was kidnapped with him last year.

"We know you were very worried about your friend who was taken with you. He was released and is well," she said.

"Our hearts ache for you to be granted your freedom so we can hug you again and set you free to continue the life you have chosen.

We implore those that are holding you to show mercy and to use their power to let you go."

Watch the Kassig's video below: