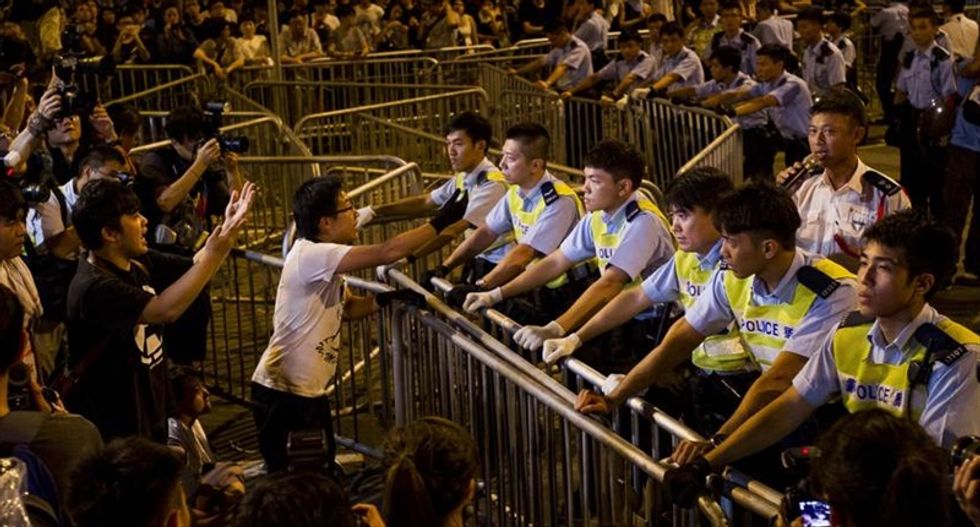 Pro-democracy protesters face policemen outside the Legislative Counsel Office, on Oct. 2, 2014 in Hong Kong. By Xaume Olleros for Agence France-Presse.

Fresh clashes broke out at Hong Kong's pro-democracy protests early Sunday with riot police using batons and pepper spray to fight back demonstrators, as student leaders reopened the door to talks with the government.

With the protest movement entering its seventh night, tens of thousands of Hong Kongers gathered for a peace rally in the downtown Admiralty district near the government headquarters chanting "Peace! Anti-violence!" and singing democracy anthems.

But across the harbour in the city's densely packed Mong Kok district tensions flared anew, as crowds of baying protesters surrounded police, accusing them of cooperating with gangsters, according to AFP reporters at the scene. Police responded with pepper spray.

Pro-democracy protesters have taken to Hong Kong's streets all week to demand the right to nominate who can run as their next leader in 2017 elections. Beijing insists only candidates it has approved will be able to stand.

Student leaders said early Sunday that they would meet the government if certain conditions were met, having scrapped planned negotiations the previous day over anger at police actions in earlier clashes.

In Mong Kok, a working-class district of shops and residences that was also the site of ugly scenes Friday, furious protesters claimed anti-democracy agitators from the city's triad mobs were being arrested -- only to be released back into the crowds again.

"The police have been cooperating with gangsters," said David Chan, a 22-year-old student.

"We have witnessed the police letting go of the gangsters. That's why the peaceful protesters are so angry, We have no trust in them any more."

Hong Kong's main student union, HKFS, said in a statement: "The government should investigate why the police were so lax in enforcement, accusations of helping criminals and to give an explanation to the public as soon as possible."

It came after two of the city's busiest shopping districts descended into chaos on Friday as opponents, some of them waving Chinese flags, clashed with protesters, tearing down their tents and barricades.

The incidents led to accusations that the police failed to protect the demonstrators from the opposing crowds and speculation authorities had hired paid thugs to break up the protests.

"As long as the government responds to the above, the students are willing to talk again," the HKFS said.

Police said several suspected triad members were among 19 people arrested after Friday's clashes, but the city's security chief denied allegations that the government had called on hired criminals.

"These accusations are made up and are very excessive," Secretary for Security Lai Tung-kwok told reporters.

But pro-democrat lawmaker Albert Ho said the police "seemed to show a lot of indulgence to triad activities".

Triad gangs have traditionally been involved in drug-running, prostitution and extortion but are increasingly in legitimate ventures such as property and the finance industry.

Some are believed to also have links with the political establishment and there have previously been allegations of triads sending paid thugs to stir up trouble during protests.

The People's Daily newspaper, a Communist Party mouthpiece, said in an editorial on Saturday that the protesters were "day-dreaming" over the prospect of change.

Small rallies by crowds sporting blue ribbons were held by people who said they supported the police and the government, in a growing sign of a backlash against a campaign that has caused wide-scale disruption and taken a heavy toll on local businesses.

In a speech broadcast on television, Hong Kong's reviled leader said he was determined to clear the streets of protesters by Monday when the city returns to work.

"The government and the police have the duty and determination to take all necessary actions to restore social order so that the government and some seven million people of Hong Kong can return to their normal work and life," Chief Executive Leung Chun-ying said.

Fears of intimidation have replaced the festive sense of unity that had prevailed for days.

There were widespread reports of sexual assault in the packed crowds.

An AFP reporter in Mong Kok heard a female counter-demonstrator tell pro-democracy crowds through a loudspeaker: "Women are supposed to be touched by men." She spoke in Cantonese with a mainland accent.

Later, a crowd of some 200 people were seen chasing a man they believed to be an anti-democracy agitator. He was forced to seek protection from the police.

Journalists have also been targeted. The Hong Kong Journalists Association said it had confirmed five attacks against members of the media.