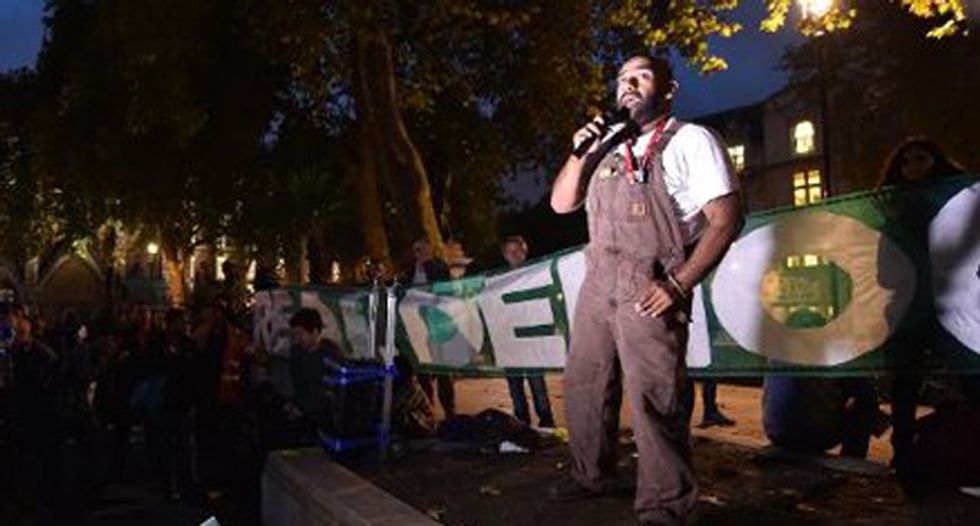 An activist addresses anti-government campaigners during a rally at Parliament Square in London on October 14, 2014 (AFP)

Some 200 anti-government campaigners rallied in front of the British parliament on Friday, saying that they were planning to set up an "Occupy Democracy" camp without official permission.

The protesters, some wearing Anonymous masks and holding up a large banner reading "Real Democracy Now", gathered on the eve of a trade union march expected to draw tens of thousands.

They were watched by about 25 police officers.

"We are here in front of Westminster to say we want real democracy, and we want it now," said activist John Sinha, one of the organisers, as he addressed the crowd.

Ilana Taylor, 18, who works in an environmental group, said: "Democracy is totally being eroded. It's becoming more and more profits before people."

Nick Nack, 47, who lives on a communal farm in southwest England, said: "I've travelled all the way from Somerset to be here because I think it's really important.

"They're taking away too much of people's liberties."

The demonstrators said they planned to stay on the square for nine days, but police told them they were not allowed to have sleeping bags or tents on the square.

By 11:00pm (2200 GMT), the crowd had dwindled to about 50 people sitting on the pavement wrapped in blankets and drinking tea, watched by a number of police officers.

A police spokesman said there had been "no incidents of note" during the evening.