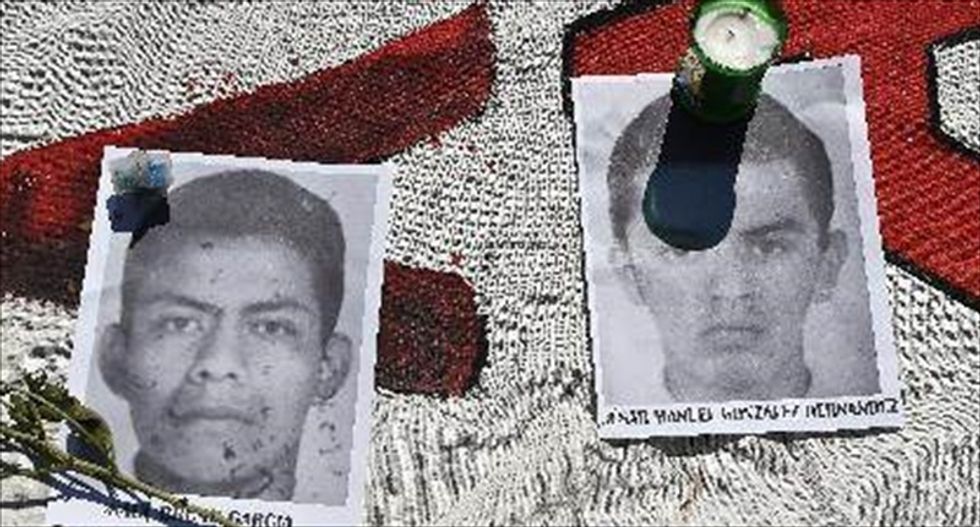 Portraits of disappeared students are displayed during a protest, in Mexico City, on Oct. 8, 2014. By Ronaldo Schemidt for Agence France-Presse.

The mayor of the southern Mexican town had been accused of murder by a member of his own party last year. His wife's family had ties to a drug cartel.

Yet, the pair was able to stay in power in Iguala until 43 students vanished following an attack by the gang-linked municipal police force last week.

Now officials are scrambling to explain how Mayor Jose Luis Abarca and Maria de los Angeles Pineda Villa, who have apparently gone into hiding, were able to remain in office for so long in the town in Guerrero state.

The discovery of a mass grave containing 28 unidentified bodies outside Iguala last weekend has raised fears that the students were massacred, turning the case into a human rights scandal for President Enrique Pena Nieto.

Described as "the imperial couple of Iguala" by El Universal newspaper, their role in the attack has come under scrutiny.

Guerrero's governor said one theory was that Pineda Villa was concerned the students would disrupt a speech she was giving as head of family social services.

Governor Angel Aguirre, however, stressed that it was just one of several theories and that it should be taken with caution.

But the events in the mountain-fringed town of 140,000 people have put a spotlight on the infilitration of public offices and security forces in Mexico during a drug war that has killed tens of thousands of people since 2006.

Pena Nieto sent federal forces to take over the town's security this week and disarm the entire police force after 22 officers were detained and accused of colluding with the Guerreros Unidos gang in the attack.

The case has embarrassed the leftist Democratic Revolution Party (PRD), whose leader traveled to Iguala on Tuesday to apologize for allowing Abarca to run for the mayorship in 2012.

"We were not careful enough," said PRD president Carlos Navarrete. "We accept we made a mistake and offer our apologies to the people of Guerrero."

Despite the murder allegations hanging over him last year, Abarca attended events with top officials and took pictures with them, including Pena Nieto and the mayor of Mexico City.

The president's spokesman, Eduardo Sanchez, told AFP that Pena Nieto does not know Abarca and that he was among several elected officials who regularly approach him to take pictures.

"He's just one more person who got close to take a picture," Sanchez said, adding that he did not know when the picture was taken. "He has no relationship with this person."

Javier Oliva, a security expert at Mexico's National Autonomous University, said the couple's ability to remain in office "has to do with the very high levels of impunity in Mexico."

"Impunity is an incentive and excellent fuel for crime to grow without being bothered," Oliva told AFP.

Federal and state prosecutors have defended their decisions to never charge Abarca for murder or investigate Pineda Villa, even though her two late brothers were on Mexico's most wanted list as members of the Beltran Leyva drug cartel.

Senator Dolores Padierna told AFP that she brought allegations that Abarca murdered an activist to state and federal prosecutors in May 2013.

"We asked for support and for justice to be served," Padierna said, adding that testimony by a survivor had been ignored.

State prosecutors say Abarca was never charged because his accusers never provided any proof and the mayor denied any wrongdoing.

Attorney General Jesus Murillo Karam said late Tuesday that a PRD official had told him about the case but had not provided any evidence.

He also said his office did not act because the case was in the hands of Guerrero state prosecutors.

"I can't work with suspicions. I need to work with evidence," Murillo Karam said.

The attorney general also defended the lack of investigation into Pineda Villa despite her siblings' cartel work.