Russia offers the US help with space station after rocket explodes 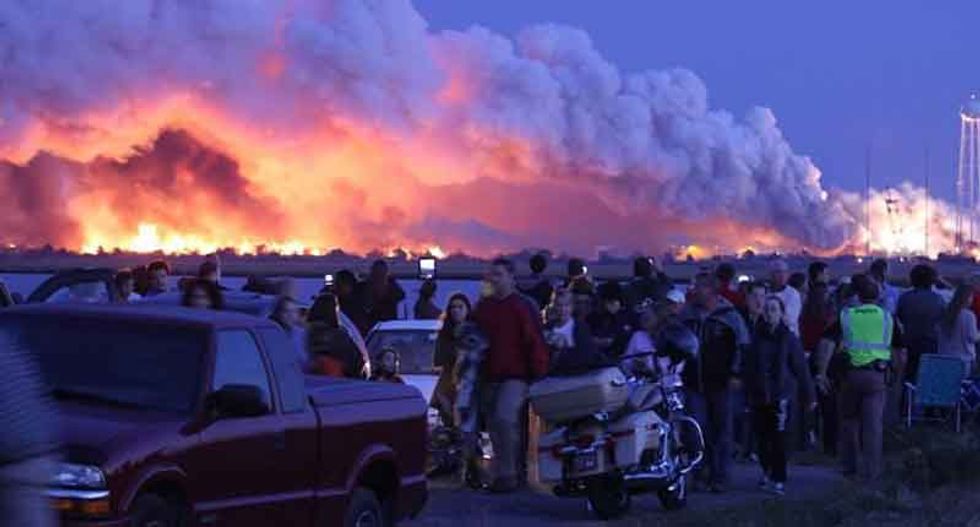 People who came to watch the launch walk away after an unmanned rocket owned by Orbital Sciences Corporation exploded (background) October 28, 2014 just seconds after lift-off from Wallops Island, Virginia (AFP)

Russia on Wednesday offered to help the United States with deliveries to the International Space Station after an unmanned American supply rocket exploded on lift-off.

"If a request is made for the urgent delivery of any American supplies to the ISS with the help of our vessels then we will fulfill the request," Russian space agency official Alexei Krasnov told state-run RIA Novosti news agency, adding that NASA had not yet asked for assistance.

An unmanned rocket owned by private firm Orbital Sciences Corporation exploded Tuesday in a giant fireball and plummeted back to Earth just seconds after a launch from Wallops Island, Virginia on what was to be a resupply mission.

Orbital's Cygnus cargo ship was carrying 5,000 pounds (2,200 kilograms) of supplies for the six astronauts living at the research outpost, a US-led multi-national collaboration.

Officials said the cost of the rocket and supplies was over $200 million, not including the damage caused on the ground.

Europe stopped delivering supplies to the ISS this summer, and the outpost is now resupplied by Russia and two NASA-contracted private American firms -- Space X and Orbital Sciences.

Russia on Wednesday successfully launched its own supply mission from the Baikonur launch site in Kazakhstan.

The Russian cargo ship Progress took off for the ISS on a planned mission to replace a sister vessel.

Krasnov said that the impact of the loss of the rocket on Russian operations at the space station would be "minimal."