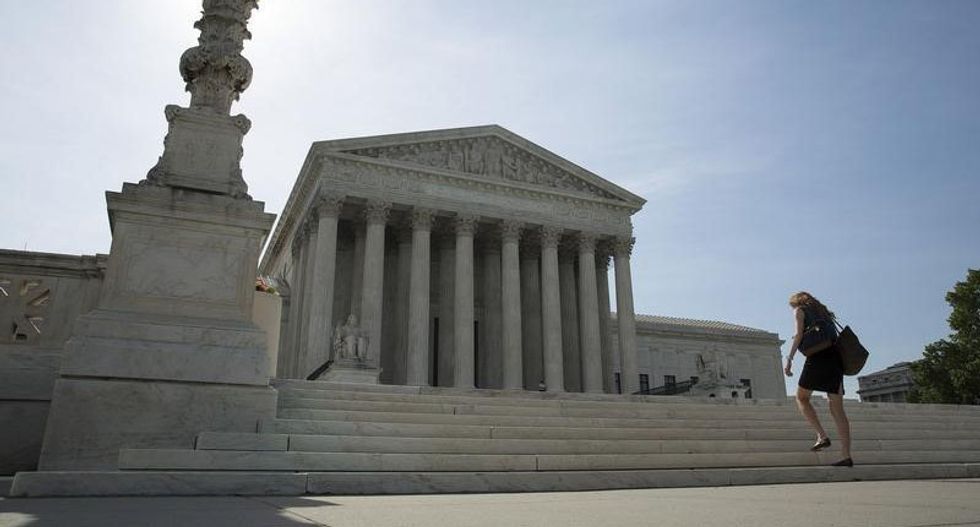 A woman walks to the Supreme Court in Washington June 19, 2014. REUTERS/Joshua Roberts

Gay marriage may be the most anticipated issue heading for the U.S. Supreme Court, but the justices also must tackle a host of business cases as they convene for their new term, including a patent battle involving Teva Pharmaceutical Industries Ltd.

The court on Monday opens its term, which ends in June. The Teva case, a showdown between the Israeli company and generic rivals over a patent for the multiple sclerosis drug Copaxone, is one of the first business cases the justices will hear, with oral arguments on Oct. 15.

It's important in the short-term as Teva seeks to protect for as long as possible a $4-billion-a-year drug responsible for 50 percent of its profits.

The case also has broader ramifications in the patent arena as shown by the number of businesses backing the generic companies including Google Inc, Hewlett-Packard Co, Yahoo Inc and Intel Corp.

The nine justices are likely to rule this term on whether states can ban gay marriage. In the meantime, more than half the 48 cases they already have accepted are business-related, including seven labor and employment disputes, three antitrust cases and three tax cases.

The court added another big business case on Thursday, agreeing to decide what types of racial discrimination claims can be made under the Fair Housing Act in a Texas case closely watched by banks and insurance companies.

Other cases include a federal agency's claim against Abercrombie & Fitch Co for not hiring a Muslim women because she wore a head scarf, a pregnant woman's employment claim against UPS Inc and a dispute over whether workers should be paid for the time it takes to go through security checks.

Business cases are "the bread and butter of the court's docket," said Kannon Shanmugam, a Washington lawyer at the Williams & Connolly law firm.

Big business does not always win even in a court earning a business-friendly reputation under Chief Justice John Roberts. Last term, the business community failed to get what it wanted in high-profile cases on environmental regulations and securities class-action litigation.

The court's interest in patent cases has been linked in part to divisions among judges on the U.S. Court of Appeals for the Federal Circuit, which handles all patent appeals. The justices reversed the appeals court in five of six patent cases it heard last term.

The issue in Teva is how much deference the appeals court must give to conclusions made by federal district court judges. Tech companies would prefer the appeals court to keep the same broad power to review lower courts that it has now, said Stanford Law School professor Mark Lemley.

They worry that judges in certain parts of the country seen as friendly to "patent trolls" - companies holding patents only for the purpose of suing firms seeking to develop new products - will get "too much power to decide patent cases," Lemley said.

Utah police have found a body that might be Gabby Petito: report

The Moab Police Department announced Sunday that they have located a body and they intend to do a briefing Sunday evening. They were searching for missing online travel personality Gabby Petito, who was traveling around the western United States and documenting her adventures with her boyfriend.

She then turned up missing. The FBI and police have been focusing on a campground in Wyoming in Grand Teton National Park.

Physician's assistant Nick Lawyer says that he was forced to resign from his position as the Sanders County health official after a man blamed him for his wife's death, revealed CBS News reporter David Begnaud.

According to Lawyer, the man is claiming that his wife was denied Ivermectin, Hydroxychloroquine and antibodies before she died from COVID-19.