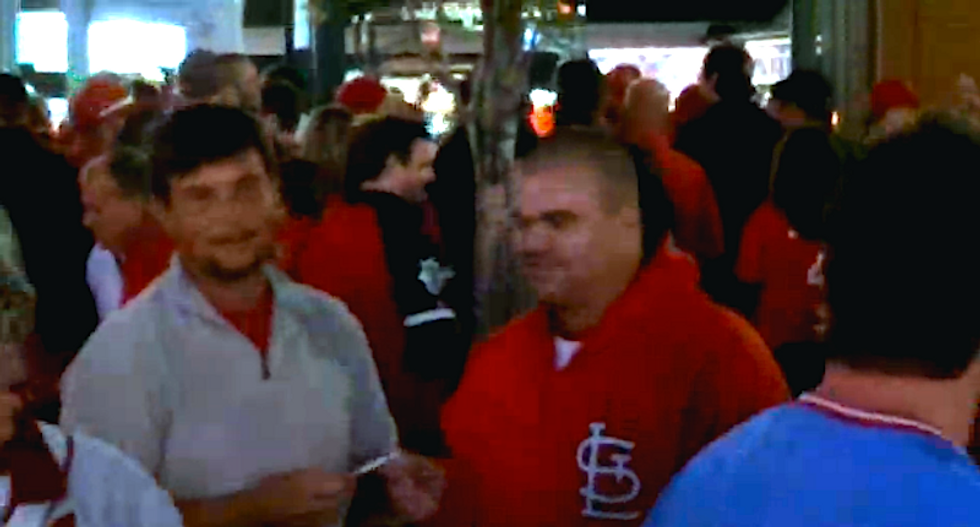 A group of white St. Louis Cardinals fans clashed Monday night with a group of black protesters seeking “justice for Mike Brown,” the unarmed teenager gunned down by a Ferguson, Missouri, police officer.

A video posted online by Argus Streaming News shows the group of young demonstrators rhythmically chanting “we gonna shut the sh*t down” outside the Cardinals’ playoff game against the Los Angeles Dodgers, reported Deadspin.

An older white man angrily tells the demonstrators to get jobs, and then he notices the video camera recording his reaction.

“That’s right!” he yells toward the camera. “If they’d be working, we wouldn’t have this problem.”

The man takes a long draw from a cigarette and disappears into the crowd, as the videographer describes his remarks as “racism at its finest.”

The demonstrators then start up a chant calling for the arrest of Officer Darren Wilson, who fatally shot 18-year-old Michael Brown on Aug. 9 in the St. Louis suburb.

Fans gathered across a guardrail in an outdoor smoking area attempt to drown out the demonstrators by chanting, “let’s go, Cardinals,” but they switch over to another chant in support of the officer after some of the fans loudly shout “let’s go, Darren!”

The fans then begin chanting “Darren Wilson” and clapping, and a man in a Cardinals jacket calls a protester a “crack head” and urges him to see a dentist.

Some of the fans engage protesters in arguments over who is tougher, and at least one fan invites a protester to cross the guardrail into the ticketed area to fight.

None of the fans crosses over the guardrail to fight a protester.

An usher tells one incredulous fan that he risked arrest for attempting to start a fight with the protesters, and a female fan tells the demonstrators they were being disrespectful.

"We're the ones who gave all y'all the freedoms that you have!" she shouts at the demonstrators.

Another woman tells the cameraman that she doesn’t understand why the protesters were there, but she was sure there had to be a better way to express their concerns.

She then expresses her doubts that the cameraman, who says he was a former Marine, was actually a veteran.

The cameraman acts offended, and suggests that she go ask another veteran the same question.

The cameraman engages in a conversation with another demonstrator about the upside-down American flags displayed during the protest, saying they showed the nation was in distress over a wave of police shootings.

“Burning the flag would be disgracing this country, and I’m a firm believer that that is a disgrace – even though that is protected under the First Amendment right to free speech,” the cameraman says. “I personally don’t agree with that.”

A grinning fan yells at the protesters to pull up their pants, and another fan tells them to go protest somewhere else.

“Go tear your own neighborhood up again, and see what that does,” said the fan, who had previously been attempting to entice protesters into a fight.

The Cardinals beat the Dodgers 2-1 to take a 2-1 lead in the best of five National League Division Series.