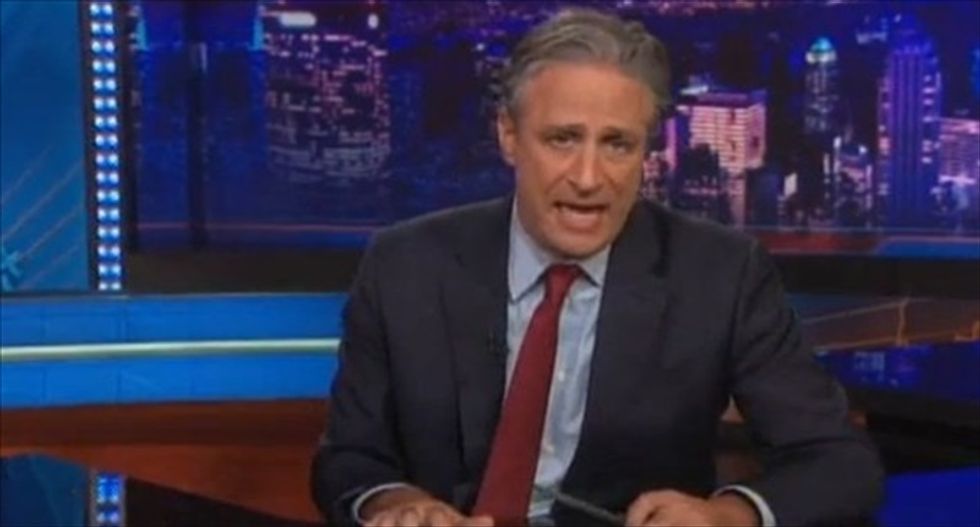 Daily Show host Jon Stewart had to be reassured on Wednesday that the Secret Service's security errors did not put President Barack Obama at risk of contracting the Ebola virus, after correspondent Jordan Klepper told him that even the virus had broken into the building.

"The Ebola isn't going to stick around very long," Klepper told Stewart. "It says it doesn't feel safe in the White House."

However, Klepper produced pictures "showing" the suddenly-upright virus lounging in the Oval Office and running through the lawn.

"No one there noticed?" Stewart asked Klepper. "None of the security noticed a 6-foot tall yellow virus entering the White House."

Klepper said it took days for anyone to notice the virus' presennce.

"People finally got suspicious when, in a Cabinet meeting, Ebola proposed a nationwide initiative to promote spitting in each other's mouths," he told Stewart. "Plus it kept asking which room Frank Sinatra had been in."

Stewart was also baffled by the pattern of mistakes that had come to light following the alleged intrusion by Omar Gonzalez earlier this month. Gonzalez reportedly hopped a fence and overpowered at least one Secret Service agent before being captured inside the building. An alarm that would have alerted guards to Gonzalez's presence was reportedly turned off at the time because it was "bothering" staff members.

"You can't do that," Stewart exclaimed. "You can't just turn off the alarm because it's irritating. This is the White House, not a '97 Honda Civic that's parked on your block at 3 a.m."

The breach, Stewart said, led to a tense discussion between Secret Service head Julia Pierson and the House Oversight and Government Reform Committee. Before she resigned on Wednesday, however, committee members offered up suggestions ranging from a higher fence capable of hurting intruders to home security systems to Spanish Bayonet plants.

"You never want to be in a position where you are charged with guarding the President of the United States and you could be replaced by a plant," Stewart said.