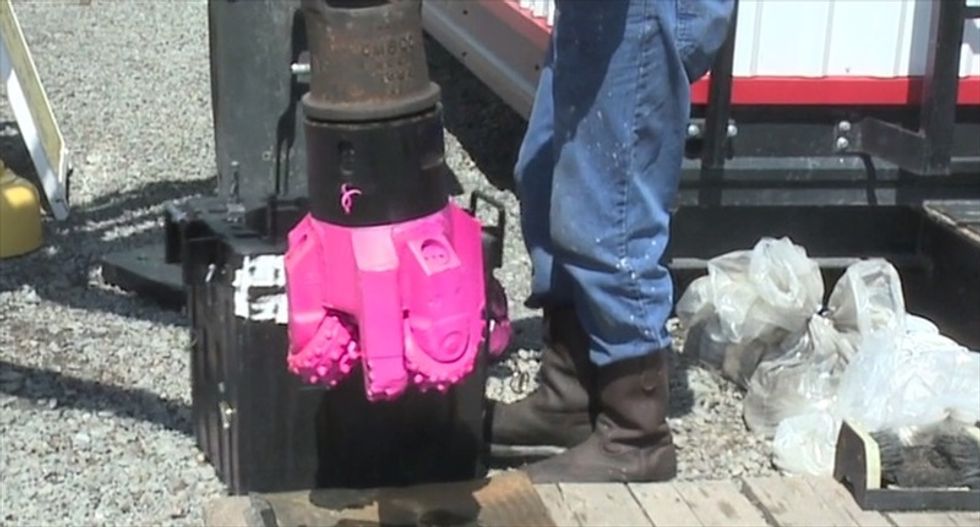 The Susan G. Komen Foundation defended its attempt to raise breast cancer awareness by putting pink drillbits on fracking platforms, amid accusations it was "pinkwashing" the fracking industry and glossing over its possible links to the disease.

A spokesperson for the group told the International Business Times that it's partnership with Houston-based firm Baker Hughes started with the company's involvement with a local "Race For The Cure" event.

"The issue is personal to them and their employees," the spokesperson said.

Baker Hughes announced that it would donate $100,000 to the foundation and use 1,000 pink drill bits at drilling locations around the world.

"If you request a bit in October, there's a high likelihood that it will be pink," Baker Hughes spokesperson Melanie Kania told the Dallas Business Journal. "We've already heard feedback from customers."

But researcher Sandra Steingraber criticized the promotion in a column for EcoWatch on Wednesday, pointing to several studies suggesting a link between chemicals used in fracking and cancer symptoms.

"The carcinogenic dangers of fracking begin at the job site and extend far beyond," Steingraber wrote. "They include silica dust (a lung carcinogen); volatile organic air pollutants (linked to lymphoma); radioactive wastes, such as radon and radium (lung and breast cancers again); and drinking water contaminants, such as arsenic and brominated byproducts (both bladder carcinogens). Indeed, cancer hazards are present at every stage of the drilling, fracking, processing, and distribution process."

But Komen's spokesperson, who was not identified, told the Times that "the evidence to this point does not establish a connection between fracking and breast cancer."

The foundation has been accused of "pinkwashing" sponsors -- promoting organizations or products that actually help cause cancer -- in the past while allegedly spending a disproportionately low amount of the funds it raises on actually finding a cure for breast cancer.

The Los Angeles Times also reported this past January that donations to the Komen foundation have dropped by 22 percent since it stopped funding Planned Parenthood in 2012, a move widely criticized as being against reproductive choice. Participation in Komen's "Race For The Cure" events has also dropped nationally.