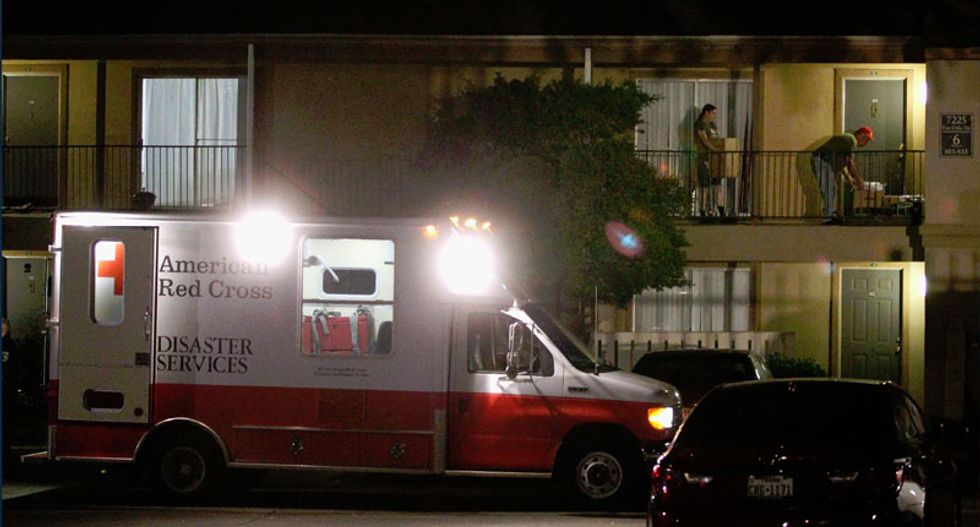 A Red Cross worker delivers bedding materials to an apartment unit at The Ivy Apartments, where a man diagnosed with the Ebola virus was staying in Dallas, Texas October 2, 2014. REUTERS/Mike Stone

The Dallas apartment where the first person diagnosed with Ebola in the United States had been staying will be decontaminated on Friday, health officials said, five days after the man was admitted to the hospital.

Four people close to the Ebola patient, Liberian national Thomas Eric Duncan, "will remain in the apartment during this time and it is safe for them to do so," Dallas County said in a statement.

Sheets and other items used by the man have been sealed in plastic bags, but questions have been raised about the delay in sanitizing the apartment since the patient's diagnosis was confirmed on Sunday.

The county said it had contracted with a private company to decontaminate the apartment in the northeastern section of the city and that the cleanup would take three hours.

"The contractor team will start the initial cleanup, place materials in secured containers, and ... a vehicle will transport the materials to a secure location," the statement said.

U.S. health officials say they are confident that they can prevent the spread of the Ebola virus in the United States after the first case was diagnosed this week.

The case has put authorities and the public on alert over concerns that Ebola could spread from Liberia and two other impoverished West African countries, Guinea and Sierra Leone, where the virus has killed at least 3,338 people.

On Friday, Howard University Hospital in Washington said it admitted and isolated a patient with possible symptoms of Ebola who had recently traveled from Nigeria "in an abundance of caution." The CDC says outbreaks in Nigeria and Senegal appear to have been contained.

On Wednesday, a government official said the United States was days away from settling the critical question of how hospitals should handle and dispose of medical waste from Ebola patients.

Most U.S. hospitals are not equipped with incinerators or large sterilizers called autoclaves that could accommodate the large amounts of soiled linens, contaminated syringes and virus-spattered protective gear generated from the care of an Ebola patient, said Dr. Jeffrey Duchin, chair of the Infectious Diseases Society of America's Public Health Committee.

A CDC spokesman said on Friday that the U.S. Department of Transportation was expected to release new Ebola waste management guidelines later in the day.

In Dallas, four people close to Ebola patient Duncan have been quarantined in the apartment where he stayed as health officials widened their search for others who had direct or indirect contact with him.

Up to 100 people had direct or indirect contact with Duncan, and out of a handful being monitored, none has shown any symptoms so far, health officials said. Ebola, which can cause fever, vomiting and diarrhea, spreads through contact with bodily fluids such as blood or saliva.

NBC News said on Thursday that one of its freelance cameramen, Ashoka Mukpo, 33, had contracted Ebola in Liberia, the fifth American to be diagnosed. NBC said he had quarantined himself after feeling ill and discovering he had a fever.

"Obviously he’s scared and worried," his father, Dr. Mitchell Levy, told NBC on Friday. "He’s been filming what’s happening in Liberia for two weeks and seeing the death and tragedy, and now it’s really hit home for him.”

Mukpo's mother, Diane Mukpo, said her son would remain in the Liberian capital, Monrovia, until he is evacuated to the United States on Sunday.

NBC has said the entire crew would return to the United States on a private plane and remain under quarantine for 21 days, the maximum incubation period for Ebola.