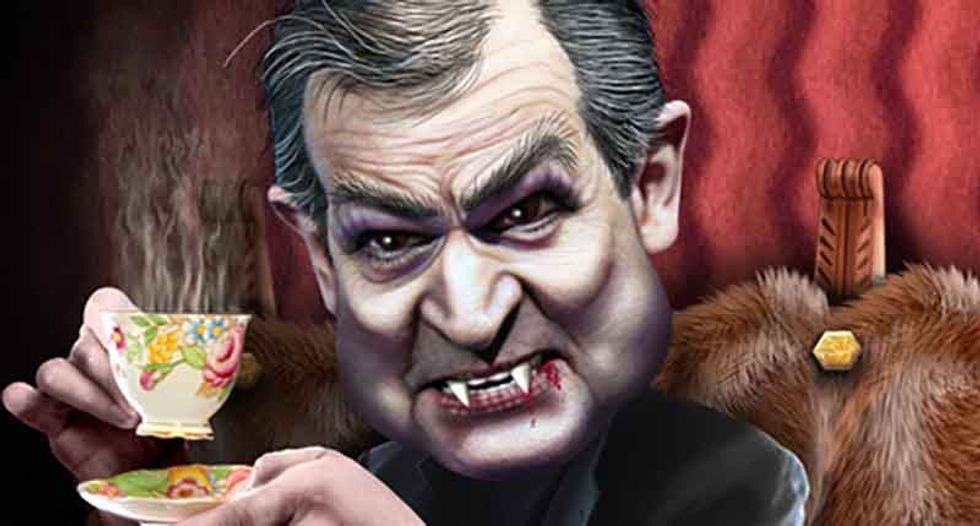 Here's a shout-out to Raw Story friend Gustavo Arellano, editor of OC Weekly which this week listed the scariest people in that truly scary land -- Orange County -- for its Halloween issue.

Knowing a good idea when we see one, we decided to throw together our own All Hallows Eve's list of the country's scariest zombies, ghouls, and other people trying to sell us a toxic version of the American nightmare. We hope you're in the mood for a fright! Tag along as we go in search of some trick or treating...

Why they're scary: Because they have Ebola and could give it to you, but really, unless you're a health care worker, the risk to you is absolutely infinitesimal, which is why they really aren't all that scary, but we didn't want to alarm you too much right off the bat.

Our tribute to the this Halloween: Bleeding out of our nipples.

Why he’s scary: The fact that he’s not up for re-election this year means that Christie is in full-on bomb-in-a-china-shop mode, shouting down hecklers, quarantining Ebola nurses for political optics and daring people to sue him.

Our tribute to him: Shutting down the sidewalk in front of our house during rush hour and randomly quarantining any trick-or-treaters who look like trouble.

Why they’re scary: Islamic extremists who behead innocent people on film and post the results online? Why do you think they’re scary? Of course, most Americans are more likely to get shot by police than they are to be victims of these maniacs.

Why he’s scary: His agenda appears to be sliding further and further to the right and now he’s even flirting with Rand Paul. We're concerned that by spring thaw he will have gone full Dennis Miller and be appearing on Fox News.

Our tribute: Smoking a bomber joint while sexually harassing a stripper in a mosque.

Why she’s scary: A zombie candidate who may tank again on Election Day and yet Massachusetts Democrats keep nominating her for stuff.

Our tribute to her: Inviting all our friends to a Halloween Party that doesn’t happen...again.

Our tribute: Molesting ourselves while reading the Book of Judges.

Why he’s scary: No matter what you’ve done, no matter how honorable and upright you think you’ve been, American liberal, you’ve let Glenn Greenwald down. You know you have.

Our tribute: Spying on our neighbors and then feeling guilty about it.

Our tribute: Getting pregnant out of wedlock during a drunken bar fight and blaming the liberal media.

Why he’s scary: In spite of a series of muffed ‘exposés’ and humiliating public turns, the conservative provocateur is still at it, still trying to prove falsehoods through deceptive editing and innuendo. Oh, no, wait. He’s not scary, he’s just sad.

Our Tribute: Moving in with our parents and never having sex with another consenting adult without having to pay for it, like, ever again.

Why he’s scary: We thought that only the Department of Defense could spend a quarter of a billion dollars so fast with so little to show for it.

Our tribute: Writing a blog post nobody reads and giving ourselves a Rolex for it.

Our tribute: Threatening to drown our neighbor’s house in hot, molten tar. But only moving at around 10 to 15 yards an hour.

Why he’s scary: This wee, red-haired right-wing Hobbit is no longer content to try and insert himself into every breaking news story in the most obnoxious way possible. The man who outed nurse Nina Pham as testing positive for Ebola and published her address online has now decided to make some news of his own by stalking his biggest online critic, Charles Johnson of the blog Little Green Footballs, albeit at an address the latter Johnson occupied more than a decade ago.

Our tribute: Getting banned from Twitter, then reinstated, then banned again. Filing random class action suits.

Why he’s scary: Because there’s nothing more terrifying than a man with nothing left to lose. He could be anywhere in the world. Oh, my god, he’s RIGHT BEHIND YOU! Run!

Why he’s scary: There has to be something we’ve forgotten that he’s going to pull out from behind his back and bitterly disappoint us in the new year. We don’t know if it’s Keystone XL or siding with the Republicans on student loans, but you know it’s coming, don’t you? DON’T YOU?

Our tribute: Sneaking cigarettes behind our spouse’s back. Spying on our neighbors and not feeling guilty about it.

Why they’re scary: They may start to sing. They are EVERYWHERE.

Our tribute: Bobbing for Xanax.

16. The people of #Gamergate

Why they’re scary: They’ll rifle through your hard drive and post the contents online in the time it takes most people to queue up an mp3 on their phone.

Our tribute: Randomly assaulting people on the street à la the so-called Knockout Game, then insisting we did it in the name of ethics in gaming journalism.

Why he’s scary: Screamy-headed sire of ideologically constipated dunderhead Texas Sen. Ted Cruz (R). Cruz Senior is a Biblical dominionist who genuinely believes that his son is on a mission from God to save the U.S. from itself. Come to think of it, his son belongs on this list, too.

Our tribute: Sipping a Cuba libre while snacking on Canadian bacon and saluting the Constitution, which should prevent a certain foreign-born senator from running for president.

Why she’s scary: Ran on a campaign comparing cutting spending to castrating hogs, believes the UN is carrying out a top secret population control project called Agenda 21 and that clumps of embryonic cells are American citizens who deserve to be armed. She says her personal firearm is a “beautiful little Smith and Wesson 9 mm and it goes with me virtually everywhere” and claims it’s to protect herself from “the government, should they decide that my rights are no longer important.”

Why he’s scary: He was apprehended with a cache of weapons and a large quantity of ammonium nitrate, a chemical used in fertilizer bombs like the one that leveled the Oklahoma City Federal Building in 1995.

Our tribute: Some very, very intense gardening, which is what we’re sure he was going to do with all that fertilizer.

Why he’s scary: He has routinely violated the civil rights of people of color and is a serial racial profiler and petty tyrant, and yet there he is, still voted in over and over as Maricopa County Sheriff.

Our tribute: Storming into a Mexican restaurant and angrily demanding a hamburger, then shooting up the place if they defy us.

Why he’s scary: This jumped-up Amway regional sales manager actually has convinced people to take him seriously as a 2016 contender, which he plans to pull off by roping disaffected black voters and a new generation of pot-smoking, privileged douchebags into the GOP.

Why they’re scary: The multi-tentacled monster that is the Koch empire is trying to strangle American democracy in a thousand ways right this very second.

Our tribute: Allowing rich children to contract out their trick-or-treating to poor children who get paid in Sweet Tarts and expired Lunchables.

Why he’s scary: He really, truly is, as they say, one fluffy kitty away from being a Bond villain. He’s a Tea Party bazillionaire who made his money through corrupt corporate hospitals and who pioneered the practice of drug-testing welfare recipients, which was found to be not only wasteful but wildly ineffective.

Our tribute: Pitching diva tantrums when people stand too close to electric fans for our liking.

Why they're scary: Gangs of armed, violent people in clown costumes committing crimes and terrorizing whole towns? Are you kidding?

Our tribute: Hiding under the bed and whimpering in terror.

And there you have it, our list of scary monsters that we hope we don't run into. Happy Halloween!