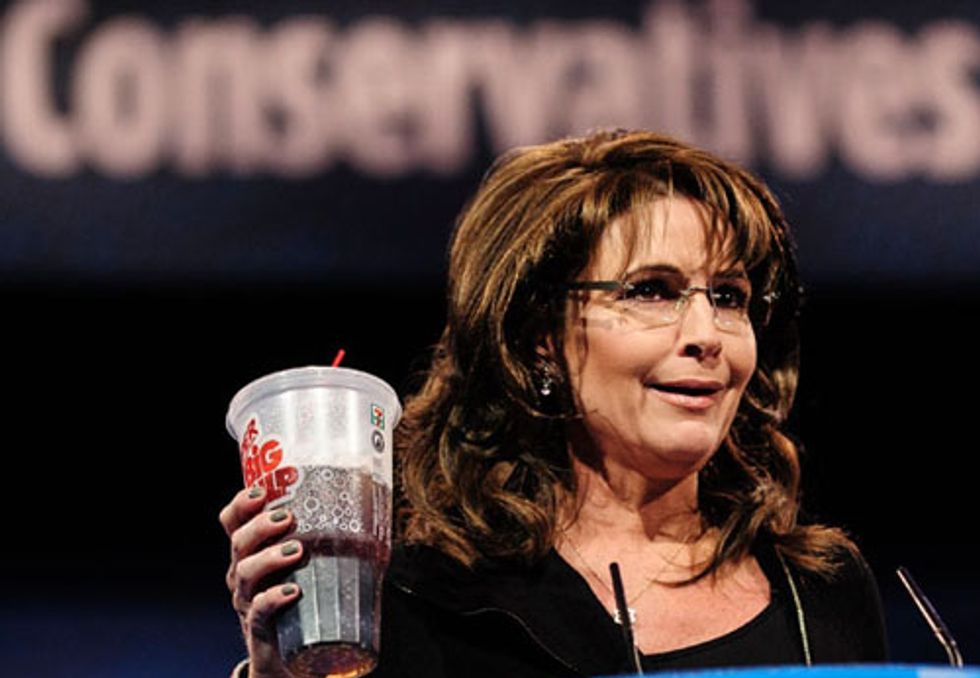 Sarah Palin holds a Big Gulp during a speech (screenshot)

With Halloween less than two weeks away, it's never too early to start planning your costume. This year, why not make a statement and go as your favorite Christian Right hero, heroine, meme or hypocrisy. 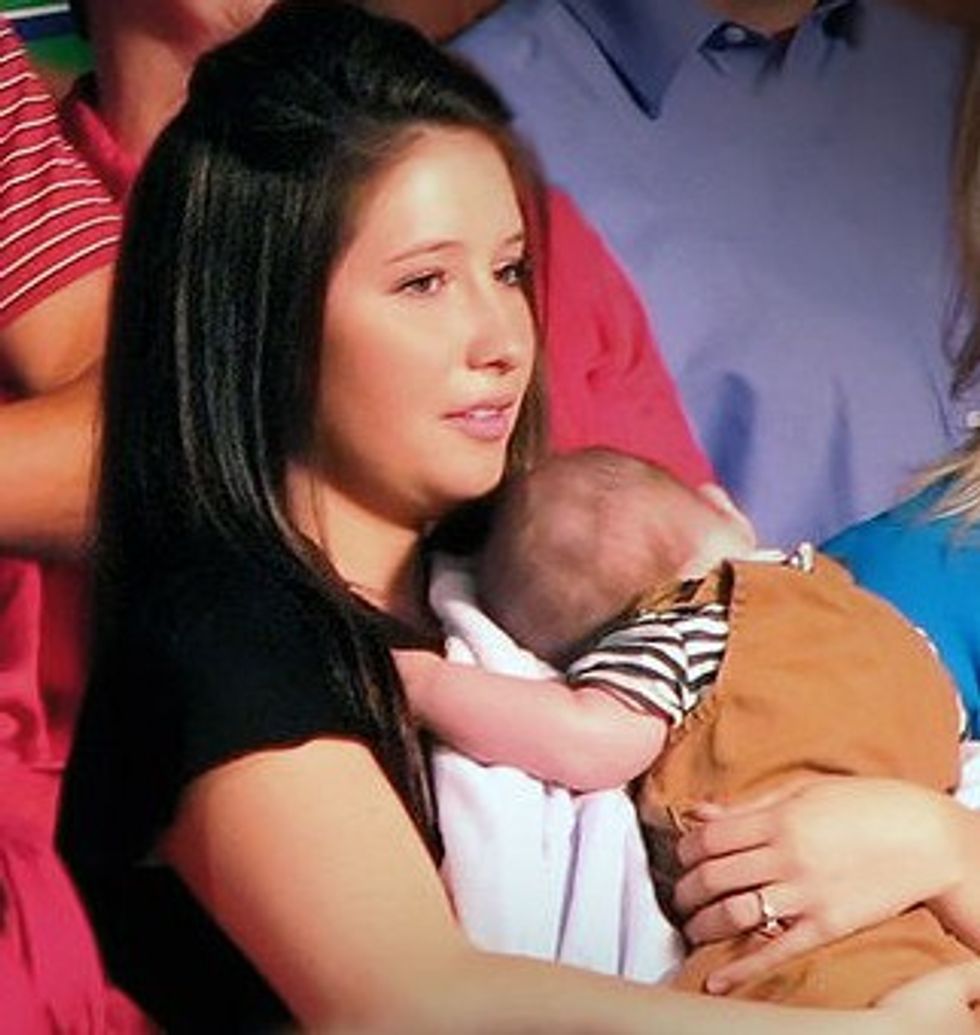 What You'll Need:  Long brown hair or a wig; a suit (skirt and jacket) or a professional dancer outfit; name tags; a sharpie; a pillow; a real life or toy baby or toddler; a bottle of Mountain Dew or a bottle of Bleach; condoms; a hole-puncher.

Instructions: Put on a suit or a Dancing with the stars outfit and shove a pillow in it so you look pregnant. Also wear a long brown hair wig.  Write Bristol Palin on a name tag and put it on yourself. Write Tripp Palin on a name tag and put it on real or doll baby. Take the condoms out of the wrapper and hole punch through each one in a few places. Then put the condoms in your pocket.  Carry around the baby in one hand all night. In the other hand carry the bottle of bleach or Mountain Dew. Offer people sips and explain that abstinence only is the best policy but that if they're in a jam, they should drink some Mountain Dew so they don't get pregnant. Take out the hole-punched condoms and explain that those never work.

What You'll Need: An adult-sized tuxedo; a stuffed animal of your choice, but preferably a box turtle, if you can find one; a baby tuxedo; poster board; sharpie, preferably a rainbow pack; two gold rings; crazy glue.

Instructions: Put on the tuxedo and the ring. Take the stuffed animal (hopefully a box turtle, but any animal will do) and put it in the baby tuxedo. Crazy glue the ring onto the animal. Take the poster board and write "Just Married" on it. If you bought the rainbow pack, alternate the colors for the different letters. Put the sign on your back. 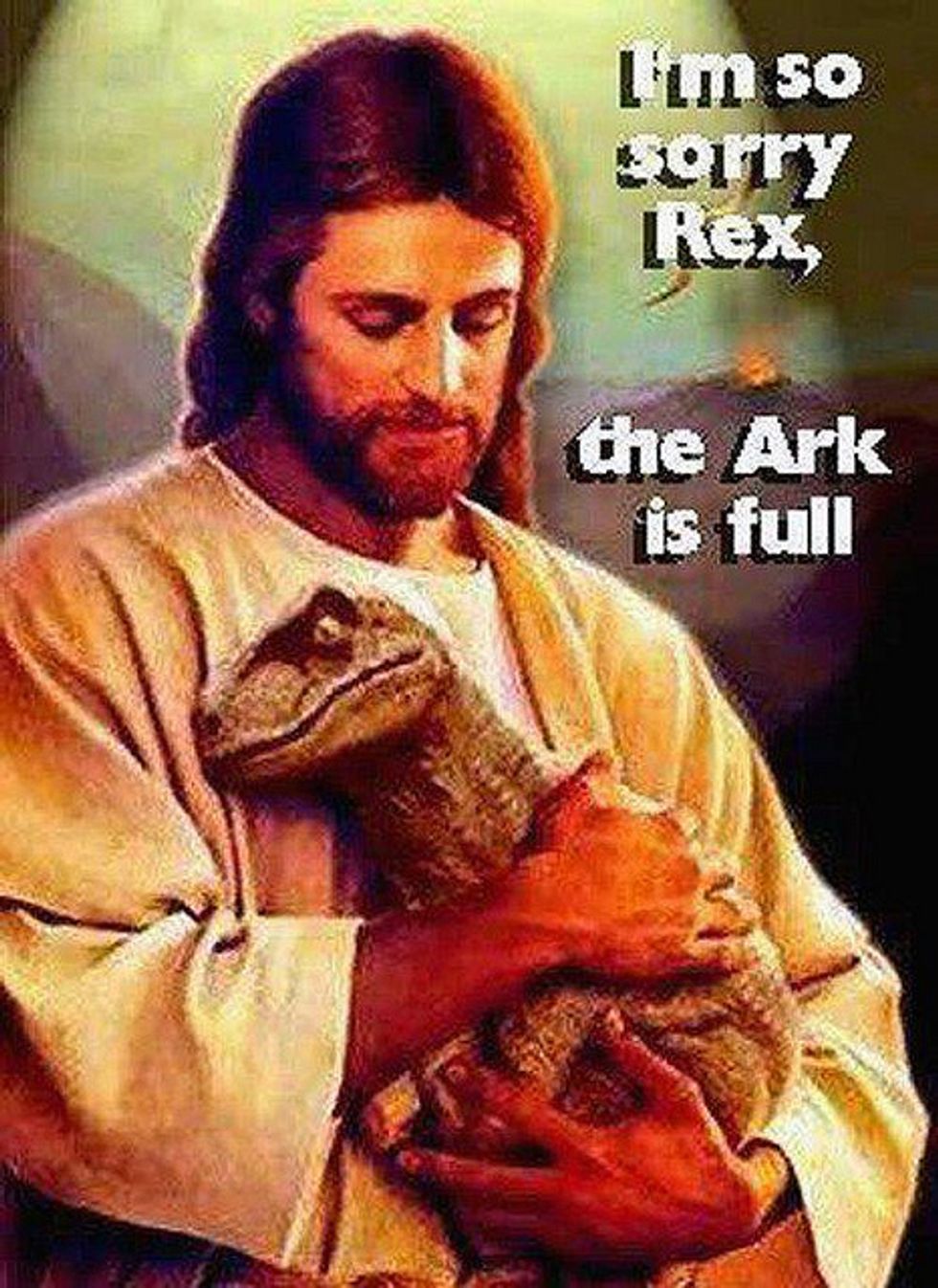 What You'll Need: Jesus costume (wig, or long hair and beard, Roman sandals, robe. One to two stuffed animal or toy dinosaurs. Or one or two dinosaur costumes for one or two friends.

Instructions: The Evolution Denier pays homage to Ken Ham, the brilliant president and founder of Answers in Genesis-U.S. and the Creation Museum. Ham explains that while ,

Evolution has used dinosaurs more than almost anything else to indoctrinate children into millions of years of evolutionary ideas... But the Bible gives a different history. God tells us he created all land animals the same day he created man about 6,000 years ago and what's more there were even dinosaurs on Noah's Ark because God told Noah to take pairs of every kind of land animal. You see, dinosaurs are no mystery at all if you accept the Bible's account of creation.

Well that settles it, doesn't it? Arguments based on a literal interpretation of Noah's Arc tend to sway even the most skeptical science-loving bible-hater.

To pull this off, merely put on a Jesus costume and carry around one to two stuffed animal or toy dinosaurs. Two really allows you to drive home the Noah's Arc pillar of Ham's argument. And if you have a friend or two, forget the toys and have them dress up as dinosaurs. 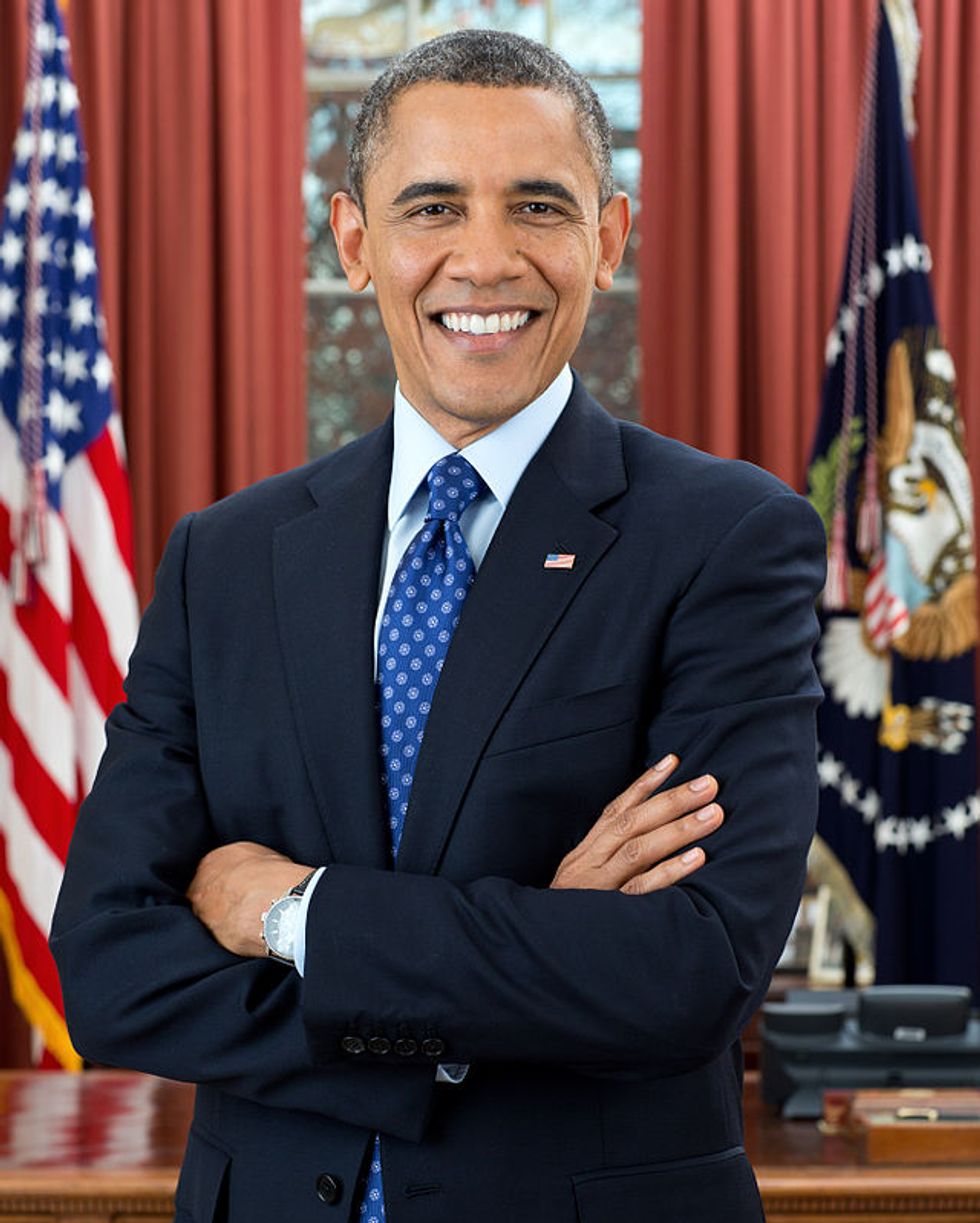 Instructions: Buy a turban and put it on. Grow a Hitler Mustache. Or buy a mustache and cut it to Hitler length and put on above mouth. Grow a beard and dye it grey. Or buy a big Karl Marx beard and put it on.  Add the devil's tail. If you have extra time, take a book that you don't mind ruining. Make a book cover and label it The Obama Doctrine. Buy a copy of The Koran, the Communist Manifesto, Mein Kampf, and Harry Potter. Cut a page of each of these books out and paste them onto a page in The Obama Doctrine book. 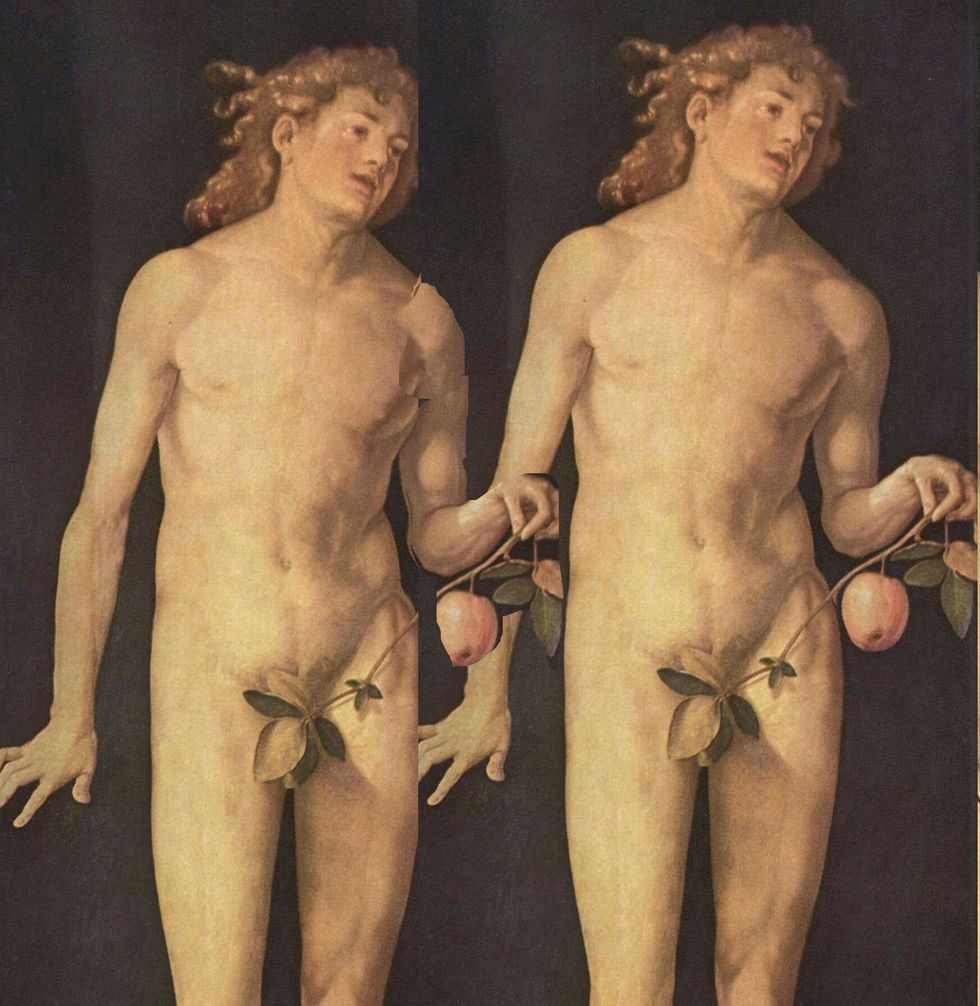 Instructions: Put on green speedo. put some leaves on it. Done.