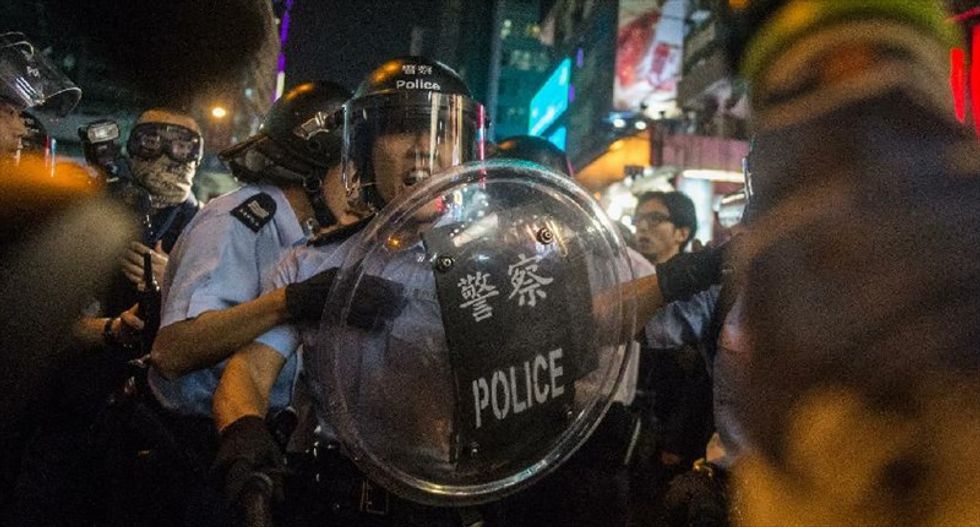 Police push through members of the Occupy movement during a clash in the Mongkok district of Hong Kong on Oct. 17, 2014. By Anthony Wallace for Agence France-Presse.

Police charged protesters using raised umbrellas for protection against pepper spray and batons on a busy main road in the bustling Mongkok district, but were forced into a partial retreat as the sun began to rise, to cheers from the crowd.

Activists rushed to rebuild makeshift barricades in an area police had opened to traffic 24 hours earlier, while thousands of others staged a sit-in at the protest camp that has existed for nearly three weeks, according to an AFP reporter at the scene.

Hong Kong police said in a statement released early Saturday they had made 26 arrests in confrontations with a crowd that had swelled to 9,000 people by 3 am (1900 GMT), with 15 officers sustaining injuries in the commotion.

It was the third consecutive night that violence has broken out after a fortnight of comparative calm -- a development that risks sinking only recently resurrected plans to hold talks between student leaders and the city's Beijing-backed authorities.

The Asian financial hub has been rocked by demonstrations -- some of which drew crowds of tens of thousands -- calling for free elections and the resignation of the city's leader Leung Chun-ying.

Protesters have held sit-ins at three major intersections causing significant disruption to a city usually known for its stability, and presenting Beijing with one of the most significant challenges to its authority since the 1989 Tiananmen protests.

China has insisted that Leung's successor must be vetted by a loyalist committee before standing for election in 2017, a proposal protesters have dismissed as "fake democracy".

Earlier in the day officers had significantly reduced the size of the northern Mongkok camp -- the second largest after the main protest site opposite the government's headquarters in central Hong Kong -- in a swift dawn raid that saw no resistance from demonstrators.

Mongkok had previously seen clashes between protesters and masked government loyalists earlier in the month.

Throughout Friday demonstrators managed to hold on to one side of a multi-lane road where the camp had been located. Police then struggled to maintain order as crowds of pro-democracy supporters began to swell during the evening.

"We want to take back this spot because it's what we had," said Gary Yip, a 17-year-old high school student.

Violence broke out around 8 pm (1200 GMT) after several protesters tried to push through a police cordon.

Protesters unfurled umbrellas and pushed against police lines, prompting officers in riot gear to respond with baton strikes and pepper spray in an attempt to hold back the surging crowds.

"The police have lost control of the situation. They've lost their minds," said protester Peter Yuen from behind the goggles he had donned to protect himself from pepper spray. "We've come here peacefully, to peacefully protest for our future."

Meanwhile Paula Bronstein, a photographer with the Getty Images agency, was also detained by police during the clashes, two AFP reporters confirmed.

On Thursday the government had made a dramatic U-turn and announced a resumption of talks with the Hong Kong Federation of Students (HKFS), one of the groups leading the ongoing protests, after abruptly pulling out of discussions a week earlier.

But questions were soon raised over whether the talks could achieve a substantive breakthrough, with the government unwilling to cede to protesters' core demands and Leung adamant that police would continue to clear demonstrator-held barricades.

In a statement released shortly before renewed violence broke out in Mongkok, the HKFS called on the government to stick to a timetable of talks slated for next Wednesday.

But it warned that the clearance of the camp earlier in the day had already "damaged the foundation of talks".

Confrontations have spiked in recent days as police began chipping away at protester defences.

Tensions soared further after video footage emerged showing plainclothes police officers beating a handcuffed demonstrator in the early hours of Wednesday during some of the most violent clashes since the protests began.

The victim, a social worker and local party activist, was arrested after being seen throwing water over officers.

Seven officers involved in the beating video have been suspended pending an investigation.

The incident has become another public relations disaster for the police, who were severely criticised for firing tear gas on umbrella-wielding protesters on September 28 in a move that attracted worldwide attention.